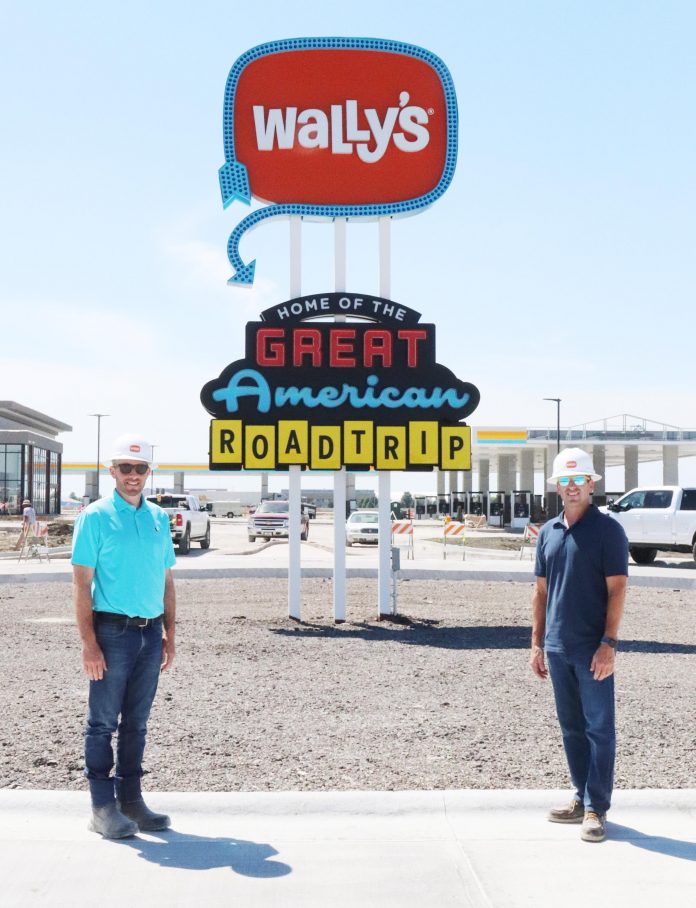 It has been some time since the idea of a new place to stop for gasoline and sundry items was pitched to the City of Pontiac. It’s been a long enough time that a new mayor has taken over.

Chad Wallis and Michael Rubenstein were looking to open a travel stop oasis that included the typical convenient store stuff, as well as other items with the intent of making a traveling experience more fun for the family.

Rubenstein said in a recent interview that he and Wallis had grown up in Route 66 communities in Missouri. It was from this, and other things such as the original “Vacation” movie, that the idea of a travel stop with all the accoutrements.

After deciding to make the project a reality, Rubenstein and Wallis went out and about looking for what they felt was going to be the perfect place to open their first store.

“We drove along the (Route 66) corridor many times,” Rubenstein said. We had five or six places to look at, and then we stopped in Pontiac and saw things that ‘checked the box for us.'”

The pair made it to city hall and asked who the person was to help them with their idea. They were directed to Bob Russell, who was still the mayor at the time.

Always the promoter for Pontiac, Russell gave the two entrepreneurs the royal tour of the community.

“After Bob took us on a tour of the town, showed us the museum and we went through everything, Michael and I left and we were like, ‘this is the spot,'” Wallis said. “This is the community we want to be in, a good home town.”

So, the two visitors attended a city council meeting, along with a man named Garrett Thompson, and pitched the idea for the “Wally’s” auto plaza.

Adding to the eventual merging of the community and the new business was a vacation trip in Europe that involved a chance meeting.

Thompson was on a river cruise with his wife on an anniversary trip. Also making the same journey were Pontiac Alderman Kelly Eckhoff, with her husband, and, coincidentally, Mike McCoy and his wife.

Eckhoff and Thompson had been kibitzing when it became known that she was from Pontiac and he was looking to help start a business here. Thompson was then introduced to McCoy, and a connection with a general contractor was made.

“We really feel that everything led us to Pontiac for our first-ever store,” Rubenstein, who is president and CEO of Wally’s, said. “It’s really a big undertaking for us from every aspect. All the stars aligned to bring us to Pontiac.”

The concept came from recognizing that the truck-stop companies, where people are forced to stop at, are not conducive to the family traveling in the automobile. Wallis, the chairman of Wally’s, said there is a big opportunity to capture that market and cater to that customer.

“There’s a place and a business to be had for the American traveler that isn’t a truck stop,” Wallis said.

He added that all travelers are welcome at Wally’s, it’s just that the facility is not set up for an over-the-road trucker.

“We’re trying to create an experience for the traveler,” Rubenstein said. “It starts with the sign in the roundabout — ‘The Great American road Trip.’ That’s really who we are catering to, the people who are on the road.

“We want to be that kind of stopping point — a cross between a mega-gas station, a convenience store, a very open food concept with our interactive stations and just to be very family friendly. We want people to be able to spend 20-30 minutes inside and enjoy their time as they are walking around, finding things they may not have been expecting when they stopped.

“You look at the typical truck stop and it is a business built for truckers. There’s the truck entrance, the truck wash. The dispensers they put on the front end for cars is really an afterthought,” Rubenstein added. “We really wanted to rethink it from a traveler’s point of view, a place that they would want to go to. That’s why we built (it with) a spacious, two entrances, a lot of light, a lot of store front with the glass, the big bathrooms, the changing stations in the bathrooms. We wanted it to be that family friendly.”

The idea is to make this a family friendly place that will also be an asset to the local clientele. There are no video games or lottery at the facility, which will be open 24 hours and well-lit.

Inside, Wally’s is divided into three areas among its 8,000 square feet. On the north end, they will be selling t-shirts, hats and bumper stickers, as well as have camping equipment, a department for kids, women and men. There will also be a Winnebago sitting in the middle.

“We’re trying to be a cross between a Norman Rockwell, old-school Americana and the kind of the American road trip — the wagoneer with the wood trim. A family experience,” Rubenstein said.

“There is definitely nothing else in the Midwest close to this.”

The middle section will be include three interactive food stations — Wally’s Sandwich House (BBQ and sandwich selection, which will be made onsite), Wally’s Cafe (beverage bar), Wally’s Popcorn (popcorn and desserts). There is a bakery behind the popcorn, includes ice cream station against the ball, also behind sandwich shop is jerky station.

There is also a convenience store are with refrigerators on the building’s south side.

“We feel confident our competition isn’t the local gas station up the street,” Rubenstein said. “We think we’re going to be a suction 60-100 miles in either direction because people are going to to want to stop, get food, use the restroom and really have a food experience that’s more in the fast-casual arena.”

The restrooms are also quite spacious.

Through various circumstances, not the least of which has been the COVID-19 pandemic, the opening of Wally’s is expected soon, in early to mid September. Ground was first broken in July 2019.

“We’re extremely happy and appreciative with the team. That includes our internal team and McCoy and others — been building the plane as we’ve been flying it,” Rubenstein said. “We feel having this open in 13 months is really impressive.”

Motorcyclist dies in crash with dump truck in Bronx – New...

Driver killed as train and truck crash at level crossing