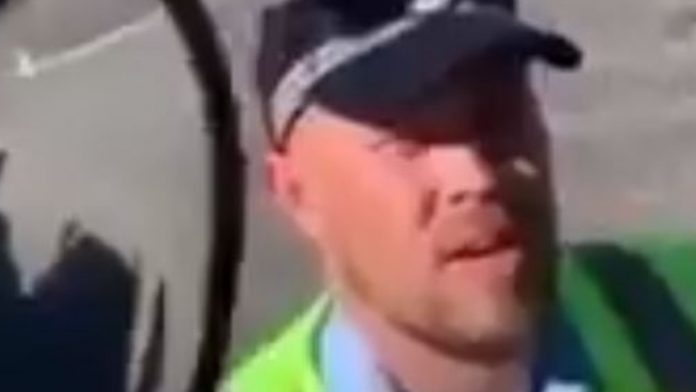 FOOTAGE of a Queensland police officer’s “2020” response to an argumentative truck driver who allegedly refused to identify himself at a border checkpoint has gone viral.

The officer, from a small rural station on the Queensland/New South Wales border, pulled over the driver after he allegedly drove off from a border crossing without providing identification.

Footage of the ensuing confrontation has gained its own Reddit thread after the officer responded with a “2020” response to the driver’s repeated demands of: “Am I a man?”

It is understood police at Queensland borders are being repeatedly challenged by “sovereign citizens” and conspiracy theorists more concerned with their own beliefs than the spread of a deadly virus.

It comes as a Melbourne woman received an onslaught of backlash for posting footage of herself refusing to answer questions at a border checkpoint.

Coronavirus denier and conspiracy theorist Eve Black bragged about refusing to provide her details to police, prompting Victoria’s Police Minister Lisa Neville to say: “I’m sure she’ll be looking forward to a knock on the door from Victoria Police members.”

The 33-year-old truck driver from Caboolture was arrested on Monday after he refused to provide his details at a border stop near Texas on Inglewood Texas Rd.

Separate to current health directives, people in Queensland are required by law to identify themselves if asked to by police.

The man posted in support of Ms Black several times on his own Facebook account, writing: “I have no doubt she is coping (sic) plenty from the sheeple and I am very glad she wasn’t assaulted by an officer who doesn’t understand the law.”

In footage he posted online, the man can be heard asking the police officer for the officer’s details while refusing to provide his own.

“OK, so you work for the corporation known as the Queensland Police in all capital letters?” he says to the police officer, before asking: “Am I a man?”

The officer, who appears exasperated, replies: “Well, what do you identify as?”

The man goes on to insist the officer has no power to ask for his details, or stop him at the border, adding: “The only border for Australia is 12 nautical miles off the coast of Australia that surrounds Australia.”

“What I don’t understand is, with your smartphone there, it is as simple as going onto google and googling Queensland border pass, answering a couple of questions and putting in your personal details, and you’re through – granted you haven’t been to one of the hotspot locations,” the officer explains.

“Do you understand how easy it is to get through this border if you just follow the rules?”

Later in the recording, the officer can be seen holding onto the man’s arm through the truck window while telling him he is under arrest.

“You are acting as an armed civilian outside your authority!” the man says as the officer holds onto him.

The driver refuses to get out until a second officer arrives on scene.

A police spokesman said the Caboolture man was issued with a notice to appear in Inglewood Magistrates Court in relation to obstructing police, unlicensed driving, driving an unregistered vehicle and contravening a police direction.

In the video, the driver tells other officers who arrive on scene that he wants to make a complaint about the first officer’s conduct.

Police have praised the vast majority of drivers for their understanding of border restrictions.

“The reality with this situation is we actually need to elevate our vigilance to stop the spread of COVID-19 into Queensland,” Chief Superintendent Mark Wheeler said this week.

“Given that we’re in a pandemic, some of the freedoms and other things that we enjoyed prior to a pandemic have been impacted upon.

“And one of those is freedom of travel and ease of travel, particularly across our border checkpoints.”

Originally published as Video: Conspiracy theorist cops it at border