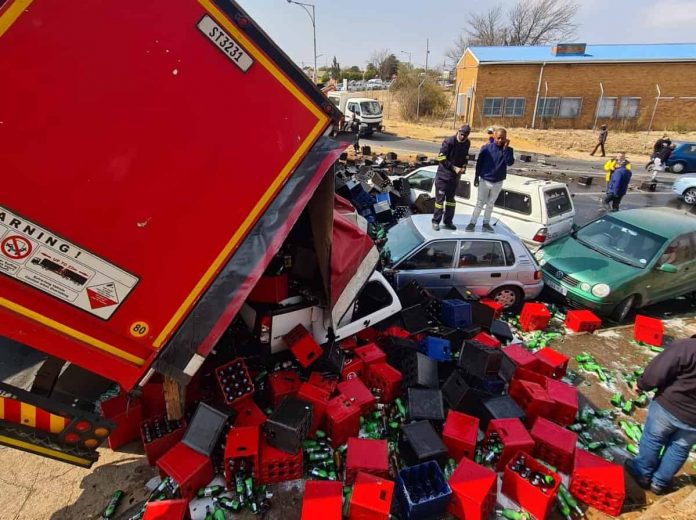 Tuesday is the first day that South Africans can legally purchase booze in more than six weeks, but for some locals in Krugersdorp, they didn’t even have to visit the bottle store to stock-up on alcohol – and it cost them nothing: A mass wave of looting was reported when this beer truck crashed on Frederick Cooper Road.

The incident, reported earlier this morning, sparked a chaotic rush for free beer and alcoholic beverages amongst those who happened to be passing by. Workers, opportunists, and people simply looking to save a few smackers on their upcoming suips helped themselves to the unbroken bottles by the crate-load.

Details of the actual accident remain scarce at this point, but it is understood that a car collided with the beer truck on the corner of Voortrekker Road, where it meets Frederick Cooper in Krugersdorp. How the lorry ended up on one side with its contents spilling onto the road still remains a mystery. But this lot were in no mood to ask questions:

Watch: Free booze for locals as beer truck loses its load in Krugersdorp

This incident bears striking similarities to one reported at the end of July, when a beer truck ferrying alcohol across Gauteng also ended up in a traffic accident. Its trailer was open and exposed, with onlookers in the nearby area of Rosslyn able to help themselves to the ales on-board.

Of course, with this happening three weeks ago, it presented an opportunity for locals to beat the alcohol ban. Prohibition has only been lifted today, with large queues reported at a number of liquor outlets on Tuesday morning. Nonetheless, some will feel that a smash-and-grab beats waiting in line…

Lindsey Graham is facing his toughest re-election yet. Could a SCOTUS...