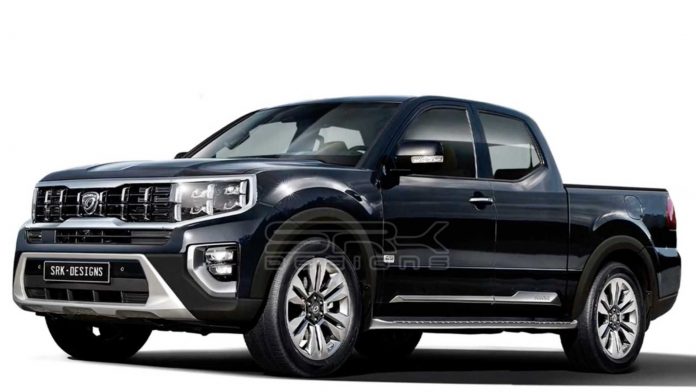 It was nearly a year ago when Kia confirmed it was developing a new mid-size pickup truck. We haven’t learned much since then – the truck won’t arrive until 2022 or 2023 – though that hasn’t stop artists from taking the lead to fill the void. The latest rendering reimagines the new Kia Mohave SUV as a truck, taking out the third-row window and seats and replacing it with a proper truck bed – and the result looks the part.

Kia introduced the updated Mohave last August, presenting a bold, upscale look for the model. It featured an upright front end, sleek lighting elements front and back, and more. Those all carry over in the rendering. The wide grille, big headlights, and chunky fog lights pushed to the corners of the bumper carry over unchanged, which should be a testament to the SUV’s design.

Things begin to change further toward the rear. The kick upward in the Mohave’s back glass moves to the second-row window – which looks like the one on the Honda Ridgeline, but on steroids. Behind that is a sizeable truck bed, though most mid-size truck beds measure around 5 to 6 feet in length, and we wouldn’t expect Kia’s truck to verge from its competitors like the Toyota Tacoma and Chevy Colorado. Some gray plastic cladding around the edges of the wheel arches adds to the Mohave’s already truck-like aesthetic.

We don’t know what Kia’s pickup will look like when it arrives. So far, Kia has only let slip a few details – multiple body styles, and it’ll come with both gas and diesel engines. We also know it’ll be closer to the Tacoma and Colorado than the Ridgeline or even Hyundai’s Santa Cruz truck. At the time, Kia Motors America declined to comment about the possibility of the truck reaching the US, though the spokesperson did say the company is always exploring opportunities.