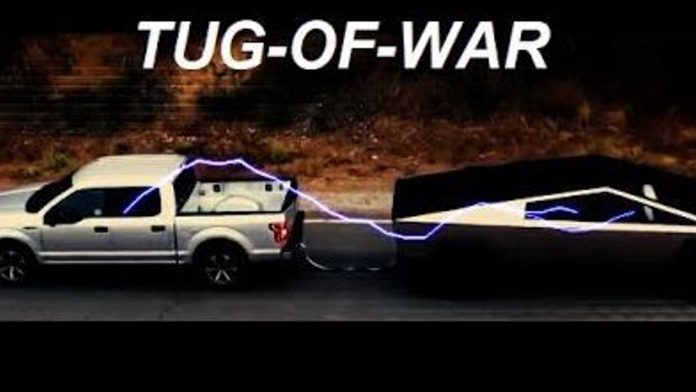 This video pits a tiny Tesla Cybertruck up against an equally small Ford F-150 pickup truck in a tug of war contest. The Cybertruck is victorious in multiple matchups against the F-150, but it still gets crushed by that huge Ram.

Of course, as you’ll immediately notice in the video, both the Cybertruck and the F-150 are tiny matchbox cars that are converted to be remote control cars. Each is still quite nifty, but neither of them has any resemblance in terms of power, weight and torque to the real-life versions of the Cybertruck and F-150.

The video pits the two matchbox-sized trucks against each other in a series of tug of war contests. There’s some tire squealing, smoke and noise, but each time the Cybertruck comes out the champ. Then, out of nowhere, a big Ram pickup truck (a real one) shows up to partake in the tug of war contest, but the driver of the Ram fails to notice the small trucks and does the unthinkable by literally crushing both.

The creator of the video provides us with some additional information:

In this video, we modified a Hot Wheels Ford truck and made our own Cybertruck from scratch. We then turned them into Radio Controlled (RC) versions to see who will be the mightiest to win the TUG-OF-WAR. There’s a plot twist at the end, enjoy.

When Tesla debuted its Cybertruck, it featured a video showing the electric truck easily beating the Ford F-150 in a tug of war contest. The was a lot of controversy surrounding the matchup though and there’s was even hint of a rematch from Ford. However, Ford later backed down from challenging the Cybertruck in a tug of war challenge.

That didn’t put an end to the F-150 versus Tesla contests though. They continued on even if unofficially and even in some of the weirdest of ways.

Following all of those tug of war battles featuring Fords against the Cybertruck, a new type emerged in which RC cars and even mini versions of the Cybertruck went head to head in tug of war against either other RC cars or even full-size SUVs.

The craziness didn’t end there though. Just a while back we saw a tank being pulled by a Tesla and now there’s this rather humorous video featured here.

We can only imagine that the tug of war battles will intensify tremendously when the actual Tesla Cybertruck gets delivered to owners. Surely, the electric truck will be pitted against anything and everything. We’re eager to see what it’s truly able to beat.

Trio may be responsible for series of Houston-area bicycle shop burglaries...