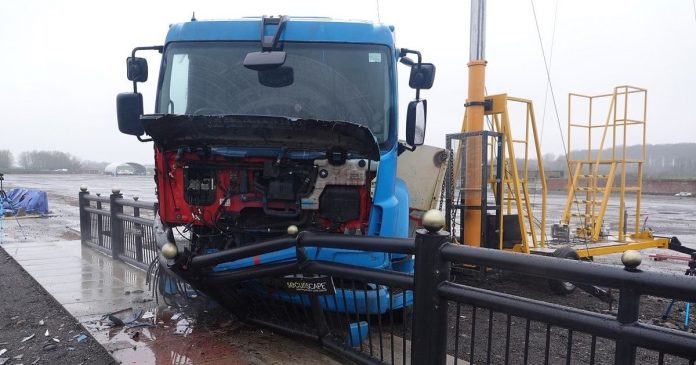 A Derby security firm has developed innovative anti-terror barriers by crashing a truck into them.

The firm Securiscape is hailing a breakthrough for road bridge safety after the latest version of its shallow-mounted pedestrian guardrail stopped an unladen 18-tonne truck travelling at 30mph in its tracks.

The company says that a 10 metre stretch of its new Guardrail Ultra – which is specifically designed to be used on bridges – has become the first product of its type to earn the IWA-14 rating, which specifies the essential impact performance required from a vehicle security barrier.

Mark Stone, the firm’s managing director, said: “This is a huge breakthrough for Securiscape, simply because we have achieved what many in our industry will have considered to be impossible – stopping an 18-tonne unladen NC3 truck using a shallow security fencing product.

To receive a maximum of two FREE daily bulletin e-mails from us, as well as breaking news as it happens, sign up to the Derbyshire Live newsletter.

Just select the newsletters you receive from our East Midlands sites here.

And if you later decide that you no longer wish to receive the emails, you can just follow the unsubscribe link in the newsletters – though we hope this won’t ever be necessary.

“That’s significant because deep-mounted bollards and similar products are not suitable for bridges due to the damage they would do to the bridge deck and services, while they cause huge inconvenience in locations where they have to be retrofitted.

“Everyone wants to keep people in towns and cities safe, but up until now, this has come at the expense of appearance. Our Guardrail Ultras look good, they offer world-beating protection for bridges and we’re delighted to be putting British engineering and products at the forefront of the HVM world.”

A spokesperson said designing and installing barriers on bridges is challenging because products cannot be installed as deep into the surface of the pavement as in a normal street.

This has meant that thousands of metres of unsightly surface-mounted security barriers and concrete blocks have had to be used on the UK’s road bridges in the wake of terrorist attacks on pedestrians on Westminster Bridge in London three years ago.

It took Securiscape staff just one hour to install the five panels and six posts used in the crash test, which took place at Mira in Leicestershire.

During the test, which was carried out at an angle of 30%, not only did the truck fail to break through the guardrail, its chassis was also bent by the impact, which immobilised the vehicle.

Truck burns to crisp on CQ mine