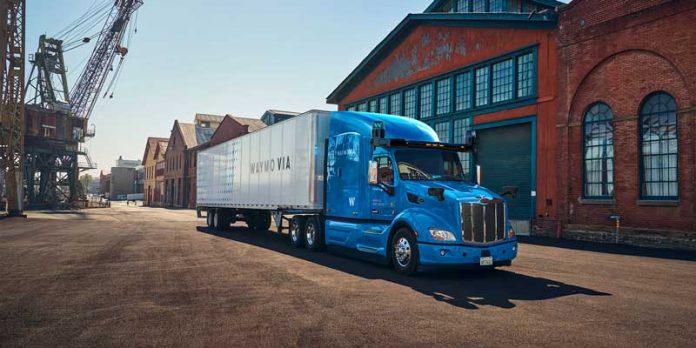 It is part of a plan by the company, formerly known as Google’s self-driving car unit, to push into autonomous commercial vehicles.

Earlier this year, Waymo said it would focus testing efforts on trucking lanes in Texas, New Mexico, Arizona and California. It also targeted that southwest shipping corridor as the center of efforts to launch autonomous trucking and develop partnerships.

The region is a popular area for self-driving vehicle tests because of generally good roads and weather.

The trucks that started testing this week have fully autonomous capability but are staffed by trained safety drivers, Waymo told Trucks.com. They will be loaded with weights but won’t be carrying any goods for paying customers.

It is a different approach than some of the other companies developing autonomous commercial vehicles.

Autonomous truck developer TuSimple is teaming with UPS and other major trucking players to organize what it says will be the first autonomous freight network. Besides UPS, the partners include Penske Truck Leasing, motor carrier U.S. Xpress and McLane, a national logistics company owned by Berkshire Hathaway.

The network will roll out in three phases, relying on where the partnership has mapped trucking lanes and will use trucks that still have so-called safety drivers supervising the vehicle’s operation. The first phase starts this year and will offer service between Phoenix, Tucson, El Paso, Dallas, Houston, and San Antonio. TuSimple told Trucks.com that it plans to demonstrate driverless operations in some time next year. TuSimple is working with Navistar to build autonomous trucks.

Waymo has not made public its timeline for starting commercial operations with autonomous trucks.

“We will likely see fully driverless trucks begin to hit the road within the coming years, but it’s not going to be a flip the switch moment,” the company said in a statement to Trucks.com.

Its experience deploying a fully driverless passenger car fleet has demonstrated “that achieving fully driverless happens gradually, guided by a safe and responsible approach. We’ve also heard from the public and industry partners that they appreciate this thoughtful and measured approach we’re taking to deploy this technology.”

Waymo will be testing along many of the Texas interstates.

“In addition to further advancing our trucking capabilities, we’re excited to explore how our tech might be able to create new transportation solutions in Texas, which has a high freight volume and is a favorable environment for deploying AVs,” the company said.

“As we continue to grow, technologies that allow us to maximize our existing transportation system will prove more critical. Waymo’s choice of Dallas-Fort Worth for its automated trucking hub helps the region prepare for the future of freight transportation and secure its leadership position,” said Tom Bamonte, the automated vehicle manager of the North Central Texas Council of Governments.