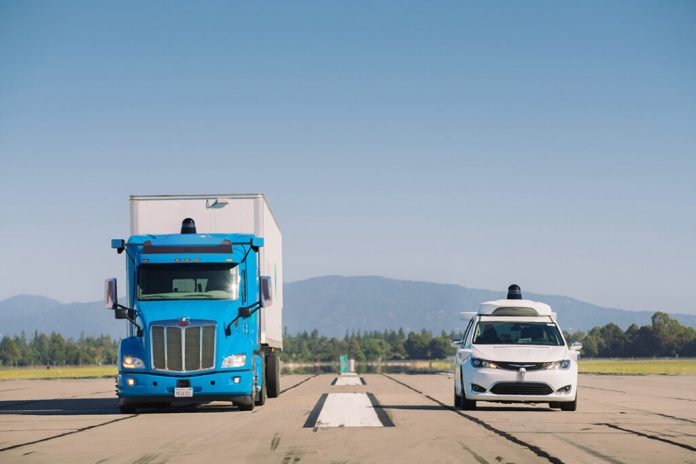 It’s not the company’s first work with FCA. The businesses have been working together for four years, and has been developing autonomous technology in Pacifica minivans.

Waymo has also been testing Class 8 trucks through its Waymo Via project.

Plus.ai, an initiative that has already demonstrated an autonomous truck in a coast-to-coast run with Land O’ Lakes, will now move to using multiple vehicles in tests with the U.S. Transportation Research Center.

The work at the independent testing facilities will simulate real-world driving conditions and “breaks new ground” when it comes to Level 4 commercial vehicle tests, the company says.

Level 4 automation will allow trucks to run independently of drivers in certain situations.

The Plus.ai tests will look to predict how the vehicles will react to one another, and plan a safe way to control the truck in response. They’ll include highway driving situations in free-flowing and stop-and-go traffic, construction zones, disabled vehicles, bicycles and other scenarios, in different weather and lighting conditions.

“We believe an independent party should validate a self-driving system’s road readiness using realistic, complex scenarios, much like humans have to pass driving tests in order to be licensed. We hope this becomes a model for the testing of all automated trucks in the future,” said Shawn Kerrigan, Plus.ai co-founder and COO.

The separate announcements come amidst a surge in recent investments into autonomous vehicle initiatives and related tests. Navistar recently purchased a stake in TuSimple, which has been running tests with autonomous trucks between Arizona and Texas.

Daimler and Volvo, meanwhile, have in recent months unveiled dedicated business units to explore the technologies.