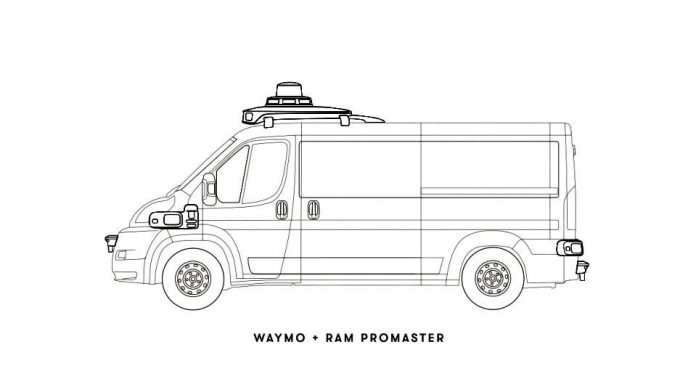 Waymo and Fiat-Chrysler America announced today an expansion of their “partnership” and that Waymo will be automating RAM Promaster delivery vans and possibly other light commercial vehicles. FCA has stated Waymo is their exclusive partner on self-driving, and Waymo has said FCA is their exclusive partner on light commercial vehicles. (Heavy long-haul trucks are already in development under the Waymo Via brand, not with FCA.) Waymo also announced a partnership with Volvo earlier this year.

Two noteworthy things are the move by Waymo into light commercial vehicles, and the meaning of the over-used world “partnership.”

Waymo’s original, and still primary mission is passenger transport. For this they primarily use the FCA Pacifica minivan. With nice comfortable seating, and an automatic door, the minivan is a great choice for a taxi. Once the system is fully self-driving, the steering wheel can be replaced to make it a higher capacity vehicle for larger groups or shared travel.

Everybody felt the attraction of the passenger vehicle business, but there’s been a lot of shift recently into commercial vehicles for cargo. Aside from the several companies exclusively automating long-haul trucks, and the short-haul delivery vehicles made for low speed operations on streets such as Nuro and Starship, we have also seen official expansions of the product plans of both Waymo and Aurora (founded by former Waymo leader Chris Urmson) into long-haul trucking. We’ve also seen several startups who had plans to compete in passengers do their early work in delivery instead, or “downgrade” their plans from passengers to cargo.

And, of course, we just saw the purchase of Zoox by Amazon
. While Zoox was heavily focused on taxi service in a custom designed vehicle, and Amazon says it plans to continue that effort, there is wide expectation that Amazon will use the technology to automate both their long-haul trucking and local delivery fleets, because … how could they not want that?

Moving people is the brass ring and the larger business. But moving cargo is nothing to sneeze at and more importantly, it’s easier. You can’t injure cargo. It’s not in the same hurry as people are. It’s perfectly OK with cargo to focus on a subset of specific routes and tasks. You can have a real product with revenue faster if you focus on cargo.

Waymo was unusual. As the first player in this space, with the most funding, they had their choice of what to do. A less ambitious company that Google
might well have selected going for an easier task that can be done sooner. That’s now how they think at Google. (I worked on the development of their strategy.) Google’s car project was the first project of what became known as Google [X] (Now just “X” and part of Alphabet) which was dubbed the “Moonshot factory.” You didn’t do it if it wasn’t some sort of moonshot.

For some time we’ve seen others seek the quicker goals in cargo. That Waymo has done so is one sign of the pace towards the moonshot which has been slower than hoped. Of course, moonshots are often slower than hoped, but still very worth doing.

Cargo operations have the advantages I described. They also come with some negatives:

There are caveats. #1 is not true for Nuro or the sidewalk robots. And there is actually a huge shortage of truck drivers today, so automating that task won’t be taking jobs any time soon, though it is an issue eventually.

Cargo vans are in an unusual niche. It is harder to use robotic delivery for service to final customers, because the van can’t bring a parcel to the door. A person has to come out of their home or office and get it. You also need to deal with the question of the person finding the parcel inside a packed van, though they can be sorted in a way so it’s always the next one. Some companies have made delivery vans full of different compartments so you just get your stuff from the only compartment to open, but that’s oversolving the problem. When delivering to a customer with an established relationship at an address you know, recording the whole process of them pulling out their box and scanning it on video, theft of somebody else’s parcel is not going to be a problem. Accidental taking of the wrong parcel is more likely.

These issues don’t exist in making vans for intra-city bulk cargo delivery, however, where the whole contents of the van are going from one warehouse to another.

For some time, the Waymo/FCA relationship has been called a “partnership.” From the outside, it didn’t seem like what I would fully call a partnership, where two partners collaborate on making a product. It seemed much more like a “contract manufacturing” relationship, where FCA built vans to Waymo’s spec, slightly modifying their standard minivan with holes and cable runs. Waymo then had another supplier add their sensors and gear to the minivan, which Waymo owned and operated.

It is quite common these days to refer to customer/supplier relationships as partnerships because it sounds good. And it’s been very important for both car OEMs and startups to declare they have “partnerships” that show they are properly in the game. For the past several years, seeing the word “partnership” in an announcement has usually made me stopped reading, it’s a sure sign it’s not really news.

Because Waymo has promoted this to exclusive in the commercial vehicle space, it’s a little closer to a partnership. We don’t know, however, how long the exclusivity lasts and if either company can, at will, get new “partners.” For FCA, which had absolutely nothing going in the self-driving space for many years, it was essential to be seen as playing. At the same time, other big OEMs have not wanted to work with the likes of Waymo. This is the sort of partnership that scares them. They don’t want to be “partners” with Alphabet the way Apple
is a partner with Foxconn. The Apple/Foxconn relationship is quite collaborative, but there is no question who is in charge, and who makes the vast bulk of the profit on the iPhone.

When it comes to passengers service, everybody wants to own the customer and control the value chain — and make sure they get the fat part of it. Car OEMs are used to doing that, and automotive suppliers usually don’t even get their brand on the many parts they provide for your car. They don’t want to be the Foxconn or even the Bosch. Many are jealous of Uber
, which leads the ride-hail business that will turn into the robotaxi business, and there Uber owns the customer too.

As such, we want to distinguish between purchase orders and joint ventures when it comes to partnerships. Waymo plans to own the customer, though that doesn’t prevent them from selling their tech at the right price. One of the reasons automakers were quick to work with Aurora (though not all have stayed) is that Aurora had no ambitions to own the customer.

A toast to the partners.

Hyundai’s Cool New Compact Pickup Is Less Than 2 Years Away...

Show up and race format has worked well – but what...