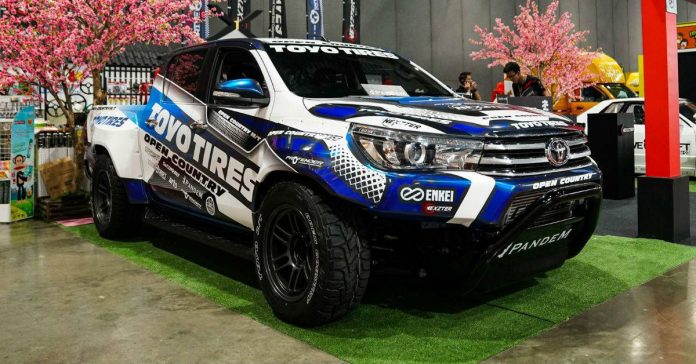 Pickup trucks don’t usually lend themselves to the kind of glamorous modifications that you see on the Japanese underground car scene. In fact, pickups are still a pretty rare sight in Japan, even though Japanese manufacturers have started to design their own trucks for the American market.

Japanese-made pickups that have made it abroad might get their suspension lifted, or maybe have bullbars added for off-roading, but trucks that stay in Japan can benefit from the impressive modification styles in the Far East, such as kyushan, kaido, and shakotan, which transform them from workhorses into thoroughbred stallions.

Related: 11 Pickup Mods Cops Always Catch (And 5 We Can Get Away With)

This Japanese-made pickup may have been given an impressive makeover, but it still looks like a traditional American truck. The Toyota Tacoma was first sold in 1995 and has been built in various US-based Toyota factories since day one.

The addition of a lifted suspension, tough off-roading tires, and bullbars suggests that this is a truck that is used for play and not work. The dayglo orange paint job doesn’t look as though it comes as standard either and certainly makes this Tacoma stand out from the crowd.

Kei cars are traditional Japanese vehicles, which sadly for the rest of us have never made it outside the domestic market. They are the tiniest of compact cars, designed to make motoring affordable for all in the aftermath of World War II.

Those on the Japanese underground car scene still love their Kei cars and love to come up with interesting ways to modify them such as this Kei pickup truck with a lowered suspension, body kit, rims, and some impressively dark tinted windows.

Related: 15 Pickup Mods Their Owners Should Regret (10 That Were A Pleasant Surprise)

If Kei cars are a traditional Japanese vehicle, then the oni-kyan modification evident on this pickup truck is very much a traditional Japanese mod. Oni-kyan translates as something like “demon camber” as is the name applied to cars whose wheels have been stanced or fitted at outrageous angles – as can be seen on the front wheels of this stylish truck.

There is no real driving advantage to oni-kyan; demon camber is all about making sure that your car (or pickup) looks good and attracts the attention of fellow stance devotees.

There are lots of rules on the Japanese underground car scene when it comes to modifications, and car owners are very loyal to their own tribe. Itasha drivers cover their vehicles in manga and anime characters, while if you drive an American car, you can consider yourself one of the Amesha.

Shakotan is a style of modification which sees vehicles have their suspension lowered as much as possible, almost to the point where it would be impossible to drive without causing any damage. But seeing as these cars are designed to be admired, that isn’t a problem.

This modified monster is barely recognizable as the compact Nissan D21 hardbody truck which is underneath all those cosmetic changes. The D21 eventually grew in size and became the Nissan Navara, but it was first sold as a compact and was also available in Japan under the Datsun Truck name.

Aside from the probably illegally tinted windows, what is most striking about this vehicle is the matte black hood, complete with added hood valves. The lowered suspension and specialist tires suggest that this is not a truck that is often put to work.

Lowering the suspension does seem to be a popular modification among pickup owners, and this 1987 Mazda B2200 is so low it seems to scrape the ground. This truck is a combination of several vehicles; most of the bodywork is by Mazda, but the suspension is from a Mazda RX-7 sports car and there is a powertrain from a 1975 Camaro under the hood.

The royal blue paintwork certainly makes it look more distinguished than the average pickup truck, and this gem was actually on sale for an asking price of less than $10,000 a few years ago.

This pink lady was created by a Japanese car enthusiast who set up his tuning shop dedicated to modifying and customizing the compact kei trucks which are so common in Japan. This repair shop goes all out when it comes to their projects; this kei truck is pink inside and out, from the custom pink wheels to the pink campo upholstery in the cab.

As well as the ubiquitous lowered suspension, this truck has something you are unlikely to see on any production pickup – a bed spoiler – and the cab also features a heart-shaped tsurikawa handle to help you in and out.

After all these dainty kei trucks, it is good to see that there are still some owners out there who want their pickups to be rough and ready. Far from having a lowered suspension, this truck has been lifted so high that most people would need a stepladder to get in and out.

The burnt orange vinyl wrap and custom headlights are eye-catching enough without the addition of the bull bars and hefty off-road tires, which show that the driver of this truck certainly intends to get the most out of his machine.

This unusual vehicle is something of an anomaly on this list, as this truck didn’t start life as a pickup. Yes, beneath those significant modifications, you should be able to spot a Nissan GT-R, the iconic high-performance sports car which has been in production since 2007.

This is a home-made job, and not a bad effort, but professional designers have also had a go at creating a GT-R truck, and some of their efforts have turned out to be very impressive. It’s just a shame that they remain as images on the computer and not as real cars on the street.

Next: How Not To Modify Your Pickup Truck (Captured In Photos)