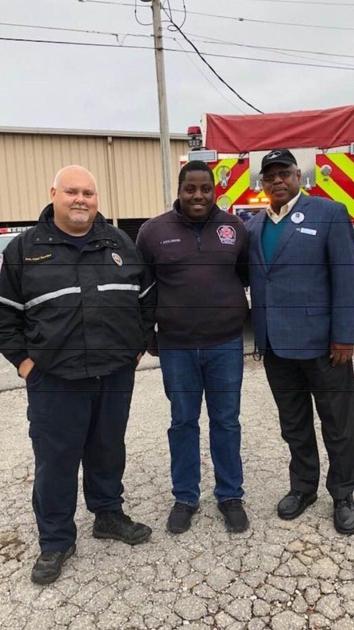 Taking a break from work isn’t in Jason Rawlins’ nature.

But the assistant chief of Waco Volunteer Fire Department is on quarantine for 14 days after he was exposed to a firefighter who tested positive for COVID-19 at the mulch fire off exit 97 on July 5.

He said he hates not working, as he wears three different badges within the county, but that’s just part of the job.

“I’ve had broken bones, I’ve had burns, and you go right back,” he said. “The 14 days is killing me because I’m not out there doing it right now.”

Rawlins has been with the Waco Volunteer Fire Department, as well as the city of Richmond, for 25 years, and more recently, he became a deputy jailer for the Madison County Detention Center.

“When I was 18 years old, me and a buddy were together, and we had went to the store and got something from the store … and we passed some fire trucks and we talked about it there in the truck together,” he explained.

“We said, ‘You know what, we’re 18 years old, we need to do something with our lives. Something fun, something exciting that can give back to the community,’” Rawlins said. “So we decided that day that we was going to go down and check out Union City Volunteer Fire Department.”

The volunteers there told Rawlins and his friend, Felix Tribble, how to go about joining, and the Union City VFD required all volunteers to be a member of the Ruritan Club. Joining the club meant paying $25 as part of the application process.

“When you’re 18 years old running around, $25 is a lot of money for you to get rid of, ‘cause you want it for everything else other than to give it to somebody for an application for a membership,” he said. “So we decided we wasn’t going to join Union City.”

Instead, the two went to Waco Volunteer Fire Department, which was free to join.

“They welcomed us with open arms,” he said. “While we were out there putting in applications in 1996, they were dispatched to a grass fire on Charlie North Road, so we actually went along with them, and it was over from there. I mean, we were hooked.”

Tribble went on to have a full-time career with the Richmond Fire Department and retired as a battalion chief several years ago.

Rawlins however, went a different route and earned a certificate as a level two fire inspector with the state.

While he was working as a firefighter and for the city, he also took a position as a deputy jailer, which he said was a funny story.

“I honestly had no intentions of ever being a deputy jailer,” Rawlins said.

But he has always been close friends with Doug Thomas, who was jailer before Steve Tussey.

“I drove by one day,” Rawlins said, “and Doug was standing on the front porch … of the jail talking to somebody, and me and Doug cut up with each other all the time.

“I drove by and hollered out the window, ‘I need a job.’”

Thomas told Rawlins to come back, so Rawlins went and talked to him. Thomas explained he had a position open.

“I’d done three days of observing, and Doug called me over Friday afternoon and said, ‘Come in and I’ll take you over and swear you in,’” Rawlins said.

He responded that he wasn’t interested and enjoys working outside. He said he didn’t want to be cooped in the jail.

But he let Thomas swear him in as a deputy jailer.

“I’ve been there ever since,” Rawlins said.

However, Rawlins said he enjoys it.

Rawlins said he enjoys it because he sees how much he helps those around him.

“When you’re a kid at 18 years old, and you’re out here running around, partying and acting stupid and stuff, you’re not thinking about giving back to the community, but there are people out there that struggle every day,” he said. “I mean, since I’ve been with Waco Fire Department, we’ve paid people’s utility bills.”

But that’s not all.

“We help people in their darkest moments when they call us, when they have no hope,” Rawlins said. “We go and we walk into everybody else’s chaos and bring calm … and I like that feeling.”

He said when people call 911, they don’t care what kind of truck shows up, what color it is or what it says on the side.

“They just need help,” Rawlins said. “I’ve just always been a person who’s worked with the public … It gives you a feeling of accomplishment.”

He compared it to mowing your yard when your grass has gotten tall.

“You can turn around and look, and you can tell you’ve made a difference,” he said.

Rawlins said he can also tell the difference at the fire department since he started with it.

In 1996, it didn’t have a computer or a phone. The department doors were bungee-strapped together because they were old and rusty, and their tanker truck was so tall, it couldn’t be backed in unless it had its water with it to weigh it down.

Rawlins said now, they have two brand new engines, a new brush truck on the way, and a state-of-the-art tanker that holds 2,500 gallons of water.

At the recent mulch fire that started on July 5 and lasted for days with over a dozen agencies responding, that tanker drove 927 miles, Rawlins said, and hauled more than 150 gallons of water. It ran 24 hours a day.

Waco VFD is also currently working as the coroner’s transport when there are fatalities in the county.

“We’ve come a long way. … I’m glad I’ve been there the whole time to help it along and to watch where it’s come today,” he said. “I’m proud of what we got and where we come from.”

But he’s not just proud of Waco.

“I feel that not only myself, but all the first responders in Madison County make a difference every day,” he said. “We wouldn’t be in that role if God hadn’t put us in the role to help people. … That’s why we’re here.”

He also stressed Waco VFD is in need of more volunteers.

“The days of the volunteers are short,” he said, because the position requires a lot of training.

But he added that there’s a job for anybody if they come visit and ask.

“The fire department doesn’t belong to us, it belongs to the community,” he said.

And it’s a lot of work to keep the doors open, he said.

On top of needing more volunteers, Rawlins said, Waco VFD’s fundraising efforts have come to a halt because of the pandemic.

The VFD normally hosts bingo on Saturdays, but the department can’t do that, or its pancake breakfasts, safely anymore.

He said it’s thanks to the community of Waco that the VFD has stayed open.

However, in October, Waco VFD is planning to still host its annual truck and tractor pull at the Madison County Fairgrounds.

EDITOR’S NOTE: Behind the Badge is a series published once a month in The Register to highlight first responders and those in any related field in Madison County. Know someone who has a good story to share? Email details to skuhl@richmondregister.com.