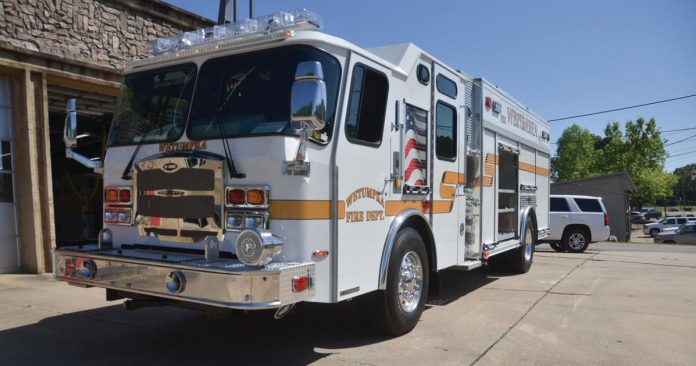 “This one truck can take care of most of our calls,” he said. “This truck can get to a call first and do most of what we have to do.”

McCullers said the truck can hold up to 780 gallons of water which is enough to typically extinguish a one- to two-room fire.

“It has a pump and water tank on the truck so firefighters do not have to connect to a hydrant,” he said. “It can handle small fires and it can get us started as the other trucks come in behind this one with more water. It also carries 24-foot ladders which is tall enough for most buildings and homes here in town.”

“That’s the rescue part of the truck,” McCullers said. “It carries our extrication equipment. The only thing this truck does not have on it is our big ladder.”

WFD chief Greg Willis said the purchase price of the truck was $629,000 and was paid out of Wetumpka’s fire fee bill funds.

“Our fee bill generates the money that allows us to do this,” Willis said. “We typically raise $250,000 a year. We feel like everybody who pays that tax owns a little piece of that truck. It goes to show how pooling our resources allows us to have something nice.”

Willis said the upgrades on the 2020 model are welcomed additions.

“Every couple of years they come out with new safety enhancements on these trucks,” Willis e said. “Most of that is the electronics. It also has stronger LED lights.

“It also comes with a software that if a trouble light comes on, like on your car, it sends emails to the manufacturer, our service company, Andrew and myself. The diagnostic process is a lot easier than going to a mechanic and letting them diagnose it. That’s designed to limit downtime. You don’t have service departments on every corner. This will be the first truck that we’ve had that has so many safety features.”

Willis said he prefers the feel of driving a pumper truck loaded with water and gear.

“With it unloaded it’s a little squirrely to drive,” he said. “One gallon of water weighs 8.5 lbs. When you get it loaded down with water and gear it makes it drive better.”

Willis said WFD is planning on introducing residents to the new truck via video due to the state’s current restrictions concerning crowd sizes and social distancing.

“We are going to introduce it to the city virtually,” he said. “Right now, we’re not really being able to have people come up and look at it.”

McCullers said he expects the truck to be in service by the end of April.

“I expect we will get at least 20 years use out of this truck,” he said.

Casper Woman Claimed To Have COVID-19; Spat On Cop