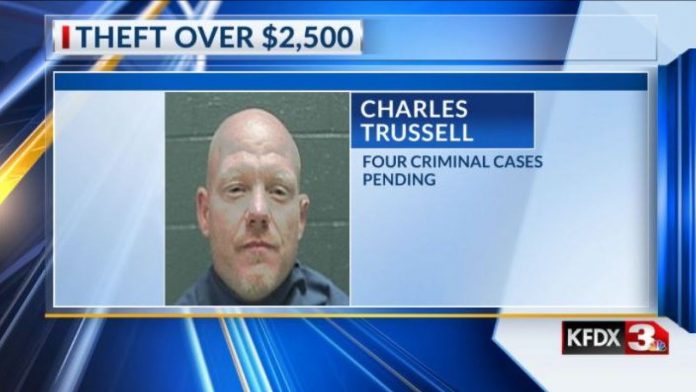 WICHITA FALLS (KFDX/KJTL)— A 39-year-old Wichita Falls man is arrested after police said he found someone’s lost keys in a store and then went to the parking lot trying vehicles until he found the one they fit, and stole it.

Charles Trussell is charged with theft of more than $2,500.

Police said a man had taken his son to Academy on Lawrence Road on May 30 to buy shoes and misplaced his keys.

He told police he thinks he set them down somewhere, and when he got to the parking lot, his Dodge Ram pickup was gone.

Police checked surveillance video inside and outside and said a balding man with a goatee was seen coming in with a female wearing black yoga pants.

Also on the surveillance video, they walked toward the shoe section then are seen leaving and going to the parking lot, trying to open Dodge pickups. When they get to the victim’s truck, they both get in and leave.

Several weeks later, police said the stolen truck was found at a home on 8th St.

The resident told police he bought the truck from Charles Trussell and Trussell was ID’ed through photo lineups and the surveillance video.

Just about a year ago, Trussell was charged with shoplifting from Walmart.

And this past December, he and another man were arrested for breaking into a home on Joline on Christmas morning and taking items.