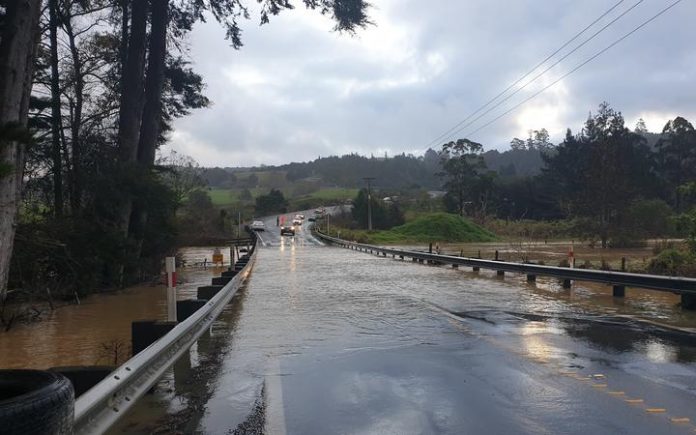 Tow trucks have been used to get people across a closed part of State Highway 1 in the Far North.

The road has been closed just north of Moerewa, at the Otiria Stream bridge, since yesterday afternoon.

The flooded stream burst its banks and water is still pouring across the road.

Some drivers in larger vehicles and four-wheel drives have been able to get through, but others are stuck either side of the bridge.

A local tow truck company was offering to take vehicles across the bridge, for a cash payment.

Mahendra and his partner as travelled from Auckland and were heading to Mangonui.

He didn’t like their chances of getting across the bridge in their car.

“We should be following some of these bigger vehicles, because apparently if we follow the bigger vehicles, we have a chance of getting through, but I don’t want to risk that though – especially if local knowledge is saying don’t go across, get a tow truck to take you across.

Mahendra said if they couldn’t get through, they would likely turn back and try and stay the night in Whangarei.

Meanwhile, heavy rain and flooding has caused sewers in Northland to leak, and people in Whangārei and Pahia are being asked to conserve tap water because treatment plants have closed. 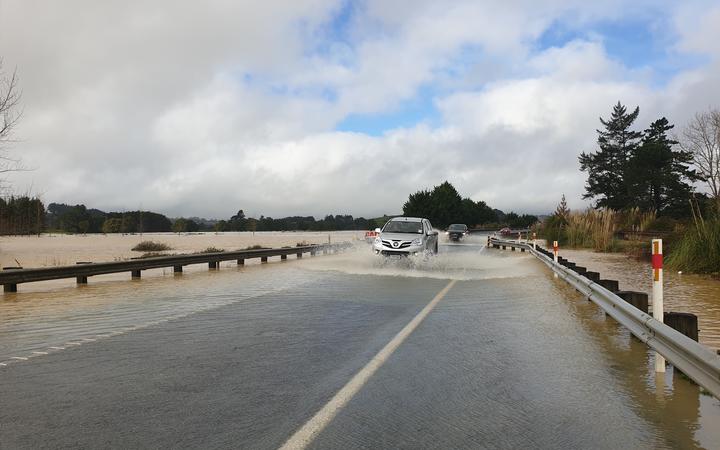 A car drives through flooding on State Highway 1 in Northland on 18 July.
Photo: RNZ / Sarah Robson

Wastewater from the damaged sewers is leaking into the Hatea River, and some roads will be closed while pumps are brought in to help fix the problem, the disctrict council says.

Contractors have been called in to help, and residents are being asked to use less water while the treatment plants are cleared of flood debris.

A Northland Civil Defence spokeserson, Murray Soljak, said without the two plants operating the supply is under pressure. He asked locals to keep up to date about events on the council’s social media sites and website.

Heavy rain and flooding has caused sewers in Northland to leak, and people in Whangārei and Pahia are being asked to conserve tap water because treatment plants have closed.

Wastewater from the damaged sewers was leaking into the Hatea River, and some roads were closed while pumps were brought in to help fix the problem, the disctrict council said.

Contractors have been called in to help, and residents are being asked to use less water while the treatment plants are cleared of flood debris.

The Hatea River flows into Whangārei Harbour, and the council says the waste will make it unsafe to swim or collect shellfish there. 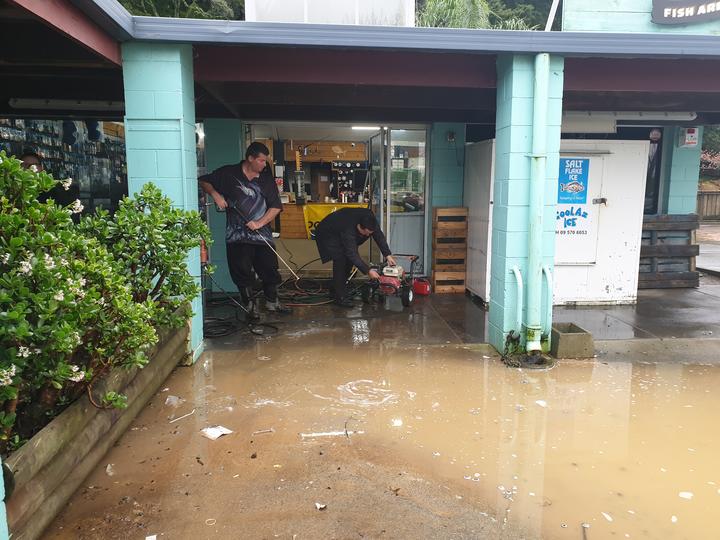 A Whangārei bakery that was flooded in last night’s massive downpour mounted a big cleanup and was still able to open its doors this morning.

About 30 centimetres of floodwaters washed through The Riverside Bakery overnight.

Great footage and commentary from the near the headwaters of the Kaipara Harbour, thanks @1farmerbooth. Hope everyone’s keeping safe. Record rainfall in Whangarei and further north is headed SW to open sea on Tasman side of Northland. Flooding for days ahead. https://t.co/RDeeTmG54p

Manager Youn Li says he got a call last night to say the shop was flooded.

He headed down to check it out and had to wade through hip-deep water to get into the bakery.

Li had begun cleaning up when another big downpour compounded on the earlier damage, and the water started creeping back in.

After that, he was told to leave because it was not safe to be there any longer.

He came back in at 5am to find the shop covered in muddy, silty water.

With the help of a couple of others he cleaned it all up – opening all the doors and using a waterblaster and broom to get the water out.

And Li says thanks to the efforts they were still able to open for the morning to keep selling pies and sandwiches.

He says it’s the first time the shop has been flooded.

The BP petrol station in Riverside Drive was closed after at least a metre of water swept through its forecourt. 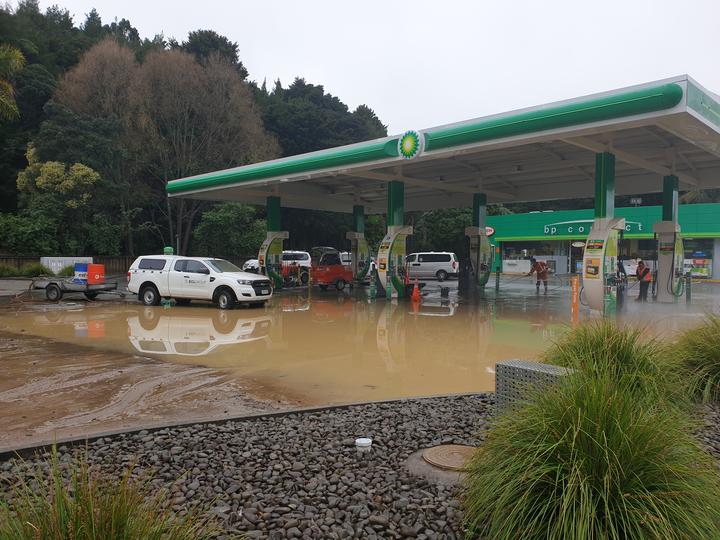 Flooding at a BP in Whangarei.
Photo: RNZ / Sarah Robson

The Insurance Council of New Zealand says anyone who can’t stay in their home because of flooding should contact their insurer, as temporary accomodation is provided in most home and contents policies.

They warn people not to enter floodwaters, and to wear protective gear including gloves and masks, if they are handling things that have got wet in the floods, as the water could be contaminated. 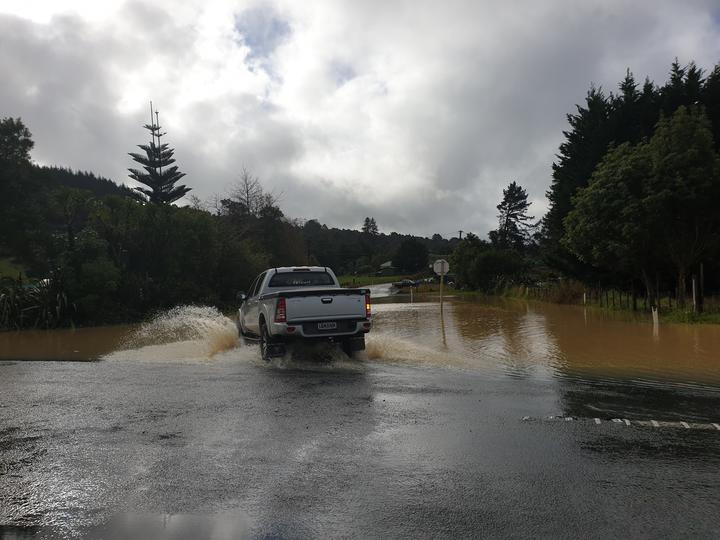 Flooding in the Far North on Saturday.
Photo: RNZ

Meanwhile, in the Gisborne district residents are being urged to stay home as heavy rain plummets down in the region.

The Hikuwai River in the Uawa catchment peaked at 9am at 12.25 metres, making it the highest flood level since 2005.

It was also the third highest flow on record in 45 years.

Contractors and council staff are working to clear trees and slips.

The heavy rainfall warning for the region has been cancelled but more rain is still expected and authorities have warned people shouldn’t go on on the roads unless they have to.

Early this morning a handful of houses self-evacuated from Mangatuna, near Tolaga Bay, while others opted to sit it out in their homes.

Hawke’s Bay farmers are being urged to keep alert because of problems caused by the heavy rain hitting after this year’s long drought.

Rural vet Karen Phillips says while rain was needed, too much brings challenges for managing stock this weekend.

“Be careful of low areas and areas prone to flooding, rivers and streams might be up.

“So just make sure animals are safe from those sorts of hazards. Also too, their feeding requirements will be up because the animals are cold and wet.”