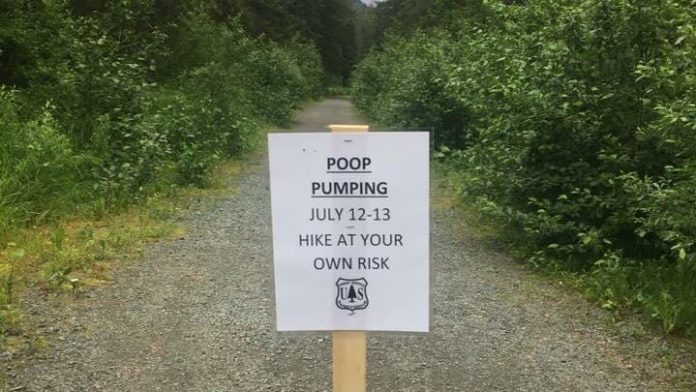 It was July 12, and Roald Simonson had just started hiking the Windfall Lake Trail in Juneau. In the middle of the path, there was a single, orange traffic cone with a stick and a laminated sheet of paper stapled to it.

Hike at your own risk. Risk of what? That was the entire sign.

“I had no idea what that could possibly mean,” Simonson said.

He looked around. Nothing out of the ordinary, except the sign.

“I would say that it only raised questions and didn’t answer any. … The sign had a warning, and nothing to tell you exactly what is going on,” he said.

(Full disclosure, Simonson and the author, Jeremy Hsieh, are friends. That’s how they ended up talking about this sign.)

This trail, plus the cabin and outhouse a few miles down it, are in the Tongass National Forest, which the U.S. Forest Service maintains. The Forest Service confirmed the sign was genuine.

“Well, in retrospect, I can see where that, uh, sign probably led to a lot of confusion,” said Brad Orr. He’s in charge of the Juneau Ranger District.

He said the Forest Service has four or five public cabins in Juneau that are heavily used.

“And Windfall Lake happens to be one of most popular, because it’s an easy hike, it doesn’t gain much elevation,” Orr said.

It gets rented year-round, about three out every four days. Which also means the outhouse gets heavily used.

It’s built over a vault. Before it fills up, the Forest Service hires contractors to pump the sewage out into barrels and haul it away. But the Windfall Lake outhouse, and others like it, are several miles from the road. You can’t just pull a septic truck up to it.

“They have it down to a pretty good science,” Orr said. “But there is aircraft in the air. And, you know, we like to alert the public that that’s going on — not that there’s any particular hazard associated with it.”

On Friday, the Forest Service had more hauling and work lined up at another popular rental, the Dan Moller Cabin on Douglas Island.

On the ground, two crews supported this operation. One hiked to the cabin the day before to prep. They planned to be up there for two weeks, dealing with the outhouse on this day, but also cleaning, servicing the stove, clearing the roof and refinishing the cabin’s exterior.

And then there was a crew on a service road near the Gastineau Meadows trailhead. They prepped the cabin crew’s supplies in several heavy duty bags, ready to be hooked up to the helicopter’s sling. One load has a bunch of sanitized, 80-gallon barrels for the outhouse.

“Yeah, as you can see, we’re doing multiple tasks today,” said Rick Daughtery, who manages cabins and developed recreation areas for the Forest Service. “This gear, some of this gear, like the wood and all that? That won’t be interacted with until two weeks from now. But, like you say, we’re trying to capitalize, you know, on those ups and downs.”

The crew said every Forest Service cabin gets serviced like this at least once a year, weather permitting.

Over a crackly two-way radio, personnel discuss the cloud levels. The clouds ended up descending. They end up scrubbing the flight and rescheduling.

However, Recreation Programs Manager Ed Grossman did share another insight about the strange sign Simonson walked into that started all this.

“It didn’t mention helicopters because people are attracted to the show,” Grossman said. “If it’s a pumping-human-waste event, that usually doesn’t draw a crowd.”

By the way, taxpayers, Orr said that except for some minor overhead costs, we’re not really on the hook for all this work on these cabins. Cabin user fees cover the helicopters, propane for heat, materials for renovations, the crews doing the work, and yeah, outhouse maintenance.

Simonson said he never thought about that connection.

“I just thought toilets up in cabins were just holes in the ground that worked forever,” he said.

Now, Simonson says he has an appreciation for the thought and work that goes into maintaining cabins.