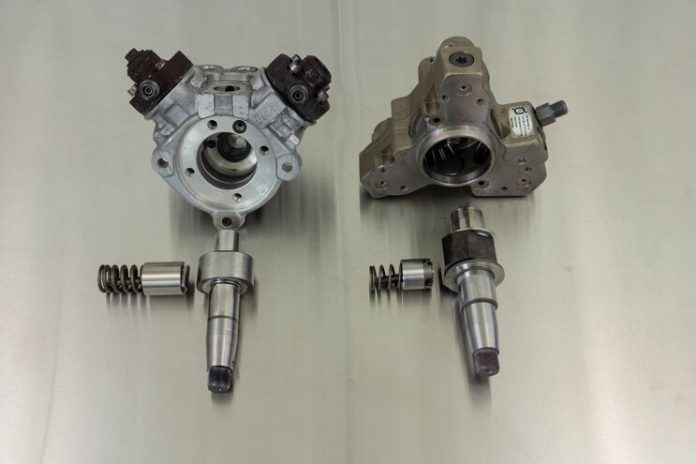 It’s very common knowledge that engines rely on fluids to operate. While the various oils, water, and fuels are referred to as a powerplant’s “life bloods,” the latter liquid—diesel, for our purposes—ranks highest among all of them.

What Is an Injection Pump?

Before going into more specifics about CP3s and CP4s, we need to define what an injection pump is for enthusiasts who aren’t up on all of the essential pieces in a diesel engine setup. The gear-driven injection pump basically feeds diesel at high pressure into the fuel system’s common rail and injectors, which are timed to fire on a cylinder’s compression stroke, right before a piston reaches top dead center.

As mentioned, the CP3 is the longtime stalwart. Although it’s heavy, the pump features three pumping elements instead of two and uses an offset cam with a polygon, and a single-bucket that houses an actuator (picture a flat-tappet cam-and-lifter setup in a gas engine). The polygon rotates elliptically to pressurize fuel. The CP3 is very durable and efficient, and when modified accordingly (stroked to 10mm, 12mm, 14mm) or used in a dual-pump configuration (where the second CP3 is belt driven), capable of making enough psi of pressure to support diesel engines making well over 1,000 hp.

CP4s have been in use for nearly a decade, and we believe they were selected by manufacturers to help reduce the production costs and total weight of today’s diesel-powered trucks. Aluminum CP4s are lighter and have only two pumping elements, but they use an aggressive camshaft with a bucket featuring a roller that rides along the cam’s lobes (like a roller cam-and-lifter in a gasser).

Technically, there are two types of CP4 injection pumps, CP4.1 and CP4.2. The difference between them is the number of pumping elements that each one has. A CP4.1 has a single element and is typically used on smaller European engines. The CP4.2 is used in GM 6.6L Duramax LML, Ford 6.7L Power Stroke, and 2019-to-present 6.7L Cummins powerplants. When discussing CP4.2 pumps, the universally recognized term for describing them is simply CP4.

While supplying high-pressure fuel is an injection pump’s job, the CP4 does so with a high probability of failing (typically around the 100,000-mile mark) and leaving owners with a need to overhaul their truck’s entire fuel system, at a cost that can be anywhere between $8,000 and $10,000.

For example, the stock Bosch CP4s in 2011-to-2016 6.6L Duramax LML and pumps in current 6.7L Ford Power Stroke engines have really been under fire (they are actually the subject of class-action lawsuits). GM rigs are not equipped with lift pumps. The CP4s experience catastrophic failures that are caused by various speculative reasons ranging from ultra-low-sulfur diesel not having sufficient lubricating properties to lack of maintenance (fuel filters not changed).

While it’s not our place to declare an official single source of the problem, what we do know is that debris created by cam erosion (metal shavings wedge between the rollers and buckets, causing the rollers to skid against the lobes and ultimately become flattened from excessive heat) eventually passes into the injectors and then is recirculated throughout the fuel system. As the cycle repeats itself, more and more deterioration occurs until the lines, regulator, and injectors are junk, and the pump possibly locks up, or in some cases is blown apart.

With failure being almost inevitable for a CP4 injection pump (we’re staying with Duramax for this discussion), “How can I prevent a pump catastrophe from happening to my engine?” is very a frequently asked question among late-model diesel truck owners.

The first and easiest thing you can do is be mindful of the fuel you use. Try to purchase major-brand diesel from reputable stations as consistently as possible, and also include checking and/or replacing filters as part of your regular maintenance (oil service) procedures.

Next, consider installing an aftermarket lift pump to enhance fuel transfer from the tank. Pump kits developed by companies such as Fass Fuel Systems and AirDog include high-capacity filters and aerators to ensure that fuel is clean and as void of water and air bubbles as possible.

When it comes to answering the “What is the best way to prevent CP4 failure?” question, we like the idea of doing away with that pump altogether and retrofitting the CP3. However, the problem with doing this is that the swap typically requires eliminating certain pieces of emissions equipment—like diesel aftertreatment hardware, for example—which are required by law to be in place and unmodified and also bring a need for custom ECM calibration in order to make the engine operate properly.

S&S Diesel Motorsport has created a fix for the fix! The company’s new 6.6L Duramax LML CP3 conversion kit bolts directly in, features a pump with the correct drive gear, and doesn’t require tuning. And, more important, it received a California Air Resources Board Executive Order (#D-756) deeming it legal in all 50 states (the company also offers a similar conversion for 2019-to-present 6.7L Cummins engines).

While there is no retrofit for bolting K16 injection pumps (the good ones that were standard on 2008-to-2010 6.4L Ford oil burners) onto 2011-to-present 6.7L Power Strokes, S&S created a billet CP4.2 bypass kit (“Disaster Prevention Kit”), which reroutes fuel from the pump’s bottom end back to the tank and filters, preventing debris from contaminating the rest of the high-pressure system. Like the conversion setups for the other brands, the bypass is CARB legal and covered by a two-year warranty, too.

Forget the river: Event series will bring music to the people