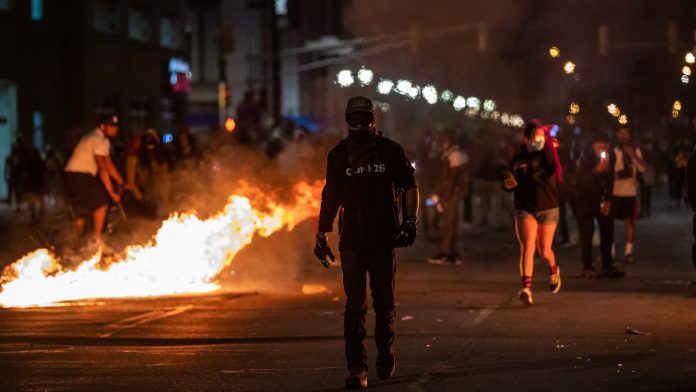 Watch as protestors and police clash during a protest in downtown Indianapolis.

For the second consecutive night, Indianapolis descended into chaos as peaceful Saturday afternoon protests gave way to violence by nightfall.

Here’s what we know about the riots that have rocked downtown Indianapolis this weekend.

Protesters kneel and raise their hands in protest on Market Street, during protests downtown, Friday, May 29, 2020.  (Photo: Kelly Wilkinson/IndyStar)

Much like Friday, protests started peacefully when they began in the early afternoon Saturday in downtown Indianapolis.

Thousands marched through the city chanting “I can’t breathe,” “black lives matter” and “ACAB 1312” – an anti-police reference – to voice their frustration. The demonstrations were the result of multiple local civil rights organizations calling people to action.

Organizers also worked to ensure that those there to support their cause did so in an orderly manner. Instructions to not resort to violence or cause damage was included in social media invitations and during the events.

When members of the crowd began to throw water bottles or other items, organizers urged them to stop and regained control.

The restraint shown by demonstrators during the day was noted and commended by both Indianapolis Metropolitan Police Department Chief Randal Taylor and Mayor Joe Hogsett.

“Earlier this evening our officers worked to protect our residents’ right to peaceful protests. Most of those protesters cooperated and did a fine job. For that, we’re thankful,” Taylor said during a late Saturday night press conference.

This afternoon, our city hosted a successful protest that allowed hundreds to lift up their cause and have their voices safely heard.

Since it ended, a small group of people have chosen to diminish that activism through inexcusable violence. It is unacceptable, and it must stop.

When the sun went down and the organized protests ended, police and demonstrators who remained on the street clashed as tensions boiled over.

Around 9 p.m., about two hours after city officials asked protest organizers to wrap up their events and clear the streets, a number of downtown businesses and vehicles again suffered damage. Protesters broke windows, started fires and sprayed graffiti on buildings.

Police in riot gear Saturday night deployed tear gas and crowd control projectiles while making arrests. They made attempts to secure the area with walls of squad cars and uniformed officers.

Helicopters could be heard overhead. The voices of police officers telling the crowd that the demonstration had become an unlawful gathering blared from speakers and megaphones.

By midnight, IMPD had confirmed one fatal shooting that claimed a man’s life at Talbot and Vermont streets, and said they were investigating “multiple” shootings, none of which were officer-involved.

On Sunday morning, they confirmed one more death from a shooting that happened around 2:30 a.m. Sunday. One man who was shot at Market and Pennsylvania streets died at the hospital.

It is unclear whether the shooting was connected to the overnight riots.

“Enough is enough,” Taylor said Saturday night. “Indianapolis, we are better than this. Downtown is not safe at this time. Residents who do not live in the downtown area, we’re asking to please vacate the area.”

But the rioting continued. As Saturday night became Sunday morning, fires continued to burn in the streets, alleys and businesses.

Indiana faith leaders will hold a processional Sunday in light of the police-involved killings of George Floyd in Minneapolis and Dreasjon Reed in Indianapolis.

The 2 p.m. event will begin at the Indiana Statehouse at 200 W. Washington St.

“It has been said evil persists when good men say and do nothing, and it is incumbent upon every decent human being to condemn the killing of unarmed black men and women in this country,” Kenneth Sullivan, senior pastor of New Direction Church, said in a news release.

Why people are protesting

Protests across the nation were sparked by the May 25 police-involved killing of Floyd in Minneapolis. Floyd, a black man, died after a white officer pinned him to the ground under his knee. His arrest was captured on video and widely shared on social media.

Also powering the national protests are the deaths of Breonna Taylor, a 26-year-old ER tech who was shot and killed by Louisville Metro Police in March, and Ahmaud Arbery, a 25-year-old black man who was shot three times as he jogged by a white father and son who pursued him in a pickup truck.

Protesters in Indianapolis Friday and Saturday said they are also protesting the police-involved shooting death of 21-year-old Reed on May 6. Reed was fatally shot by an IMPD officer following a pursuit on the city’s north side. Part of the pursuit and the shooting were streamed live on Facebook.

Police said Reed had been driving recklessly and they found a gun at the scene of his shooting that had been fired.