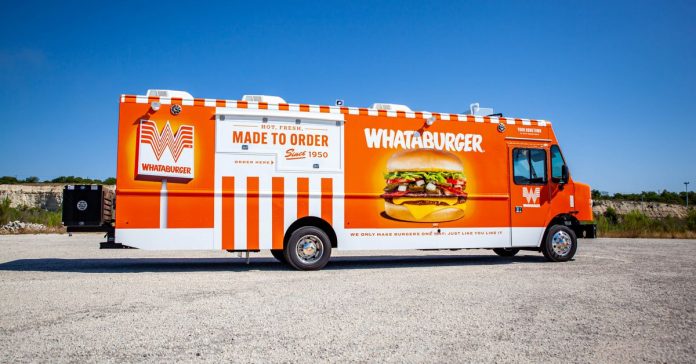 Whataburger Food Truck
Texas favorite chain Whataburger is launching a roaming food truck next year. The meals-on-wheels made its debut over the weekend at an educator event in San Antonio, as reported by My SA. The plainly named Whataburger Food Truck is decked out in the company’s signature orange-and-white colors and features a four-foot grill, for cooking burgers and the such. It was built with the help of San Antonio-based custom food truck and fabrication company Cruising Kitchens. The truck is keeping still until next year, when it will travel around to several states and sometimes serving as a preview for forthcoming physical Whataburger restaurants.

UT Austin Dining Hall Changes
As the University of Texas at Austin gears up for the beginning of its fall semester with in-person and online classes this month, the campus’s dining halls will change its operations, due to COVID-19 safety regulations, as reported by student newspaper The Daily Texan. Late night hours through 11 p.m. will be added to all dining halls: Kinsolving DIning, Jester 2nd Floor Dining, as well as Jester City Limits and Littlefield Patio Cafe. The dining halls will have limited in-person capacities, and its configurations will change to promote social distancing. The menus will be available for students before entering the food halls, and the offerings will be more limited.

Brewpub Anniversary
Crestview Black Star Co-op is celebrating its postponed tenth anniversary this month with a bunch of beer releases this weekend. This means a bunch of beer collaborations will be available for purchase on Saturday, August 15, including its Black Is Beautiful with Weathered Souls Brewing, the Can’t Quit You 5 with Blue Owl Brewing, the Chocolate Coconut Moebius with Srsly Chocolate, and the Coffee Cherry Moebius with Barrett’s Coffee, among others. Then the brewery is hosting a virtual happy hour-type event on Sunday, August 16 at 2 p.m., led by its head brewery Andy Martinec, on Facebook Live. The brewpub’s actual anniversary was in April, but it decided to delay the celebration because of the pandemic. Pickup orders can be placed online.

Market Expansion
Austin convenience store mini-chain Thom’s Market is opening its fourth location at 5901 Burnet Road in the Brentwood neighborhood, as reported by Community Impact, taking over what had been a 7-Eleven. It’s aiming to open later this year.

Break-In
Someone broke into campus-area restaurant Pizza Press and took money, as reported by KXAN, earlier last week. According to security footage, the person entered the restaurant through the back patio and took a safe and money from the cash register.

Woman arrested after man’s body found in pickup that drove off...

Layoff approaches, relationships key to the return of furloughed drivers –...