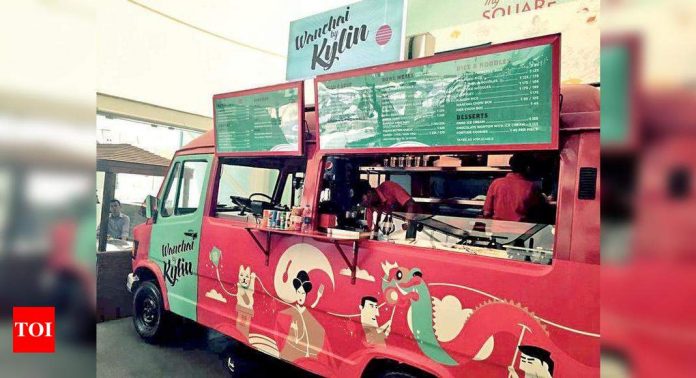 Contactless delivery, sanitised and socially distant seating, live feed from kitchens to staff temperatures marked on orders — food brands tried everything possible to win the confidence of consumers. Now, they are reaching out to their patrons in food trucks.
Jubilant FoodWorks, the company behind Domino’s Pizza, has been sending five trucks across societies in Gurgaon and Noida. Wanchai, a brand by Kylin restaurants, has already had food trucks in Gurgaon and claims to have experienced higher sales than even pre-Covid days. Speciality Restaurants, which owns Mainland China, is also about to roll out soon.
If you thought it was only about serving meals at your society’s gate, brands such as Levi’s have also started a shop on wheels campaign in Delhi and Gurgaon. Stage3, an apparel rental brand, and Max Fashion have also started their mobile stores to reach out to consumers directly.
Sanjeev Mohanty of Levi’s said the response had “exceeded expectations” and prompted the brand to “scale this to multiple cities”. Shriram Monga of SRED, a food and beverage advisory firm, said, “This mobile model allows an additional channel of sales to the brands.”
In case of a Levi’s store, the customer can try a garment at home and then buy it. For alterations, he or she can give measurements to the team that will send them to a store, have the garment altered and deliver it to the customer.
Saurabh Khanijo, director of Kylin Experience, said the food truck was an extension of Wanchai, a quick-service restaurant present in most malls. Khanijo, who has been operating the truck for a while, said he had registered higher sales during the lockdown — doing a daily business of Rs 25,000-30,000. With most outlets closed or people wary of stepping out, a food truck with a live kitchen allowed customers to see the cooking and packaging and be sure of hygiene.
For Domino’s, too, the food truck model has been a welcome ride. Some of their trucks are said to have done better business than some of their outlets. A representative said Jubilant was planning to double the number of trucks for Domino’s and introduce them for its Asian restaurant brand Hong’s Kitchen. He added that Speciality Restaurants, too, had also applied for permission for food trucks in Kolkata, Bengaluru and Mumbai.
While most brands are looking at this as the “new normal”, many are not enthused because of the lack of clear rules and guidelines. “I have been planning to start my own food truck in Gurgaon but there are no clear rules about where we can serve. The government needs to come up with clear guidelines as food trucks will be the only way to reach out to consumers in the days to come,” said a restaurateur who has been working on this model for almost two years. He said more people wanted to get into this business but feared harassment by authorities due to the lack of rules.
Khanijo said that when he started, his marketing team would go to every door seeking permission to bring their food truck. Some societies asked for a nominal fee then, but the demand for good and hygienically cooked food during the lockdown led to endless calls. Khanijo’s truck is now a regular feature at societies such as Palm Springs, The Verandas, The Summit and Uniworld. The dates when the truck would be stationed next is usually circulated on WhatsApp groups.
A resident of Parsvnath said even though the Domino’s truck had only five pizza options, almost the entire society turned up to buy them.
A fashion brand, requesting not to be named, has written to leading developers to allow it to set mobile stores on their premises. If allowed, it plans to have at least five such outlets.