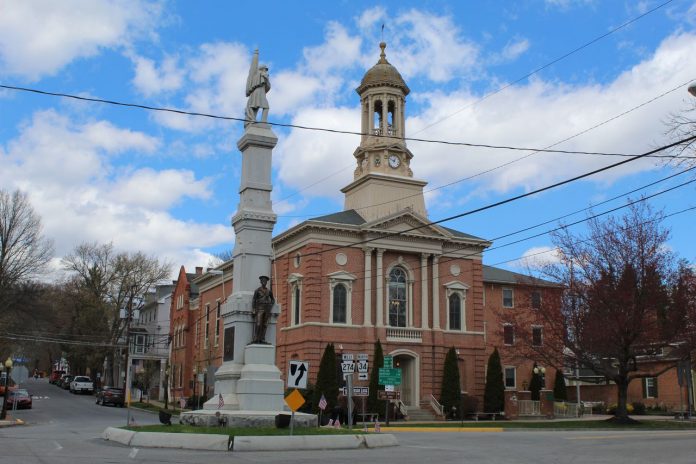 Pine Hill Road’s northern terminus is in Wheatfield Twp., where it crosses Shermans Creek and connects with Dellville Road. The road snakes south through Carroll Twp. before terminating at Route 850 in Rye Twp.

Schulze said the idea came from the road crew which observed shoulder damage along the route. Rye Twp. then engaged its engineer who determined 30 feet represented the longest vehicle length the road could safely accommodate due to some very sharp curves. He explained truck length posed more risk than weight and was easier to enforce as no scales were necessary. He added Rye Twp. would be willing to provide and pay for the initial required signs.

For their part, Wheatfield Twp. supervislors had some concerns over the proposal including impacts on local farmers and residents.

Supervisors Barry Schrope and Jeff Smith noted many pickup and trailer combinations exceed 30 feet in length and expressed reluctance to enact such a restriction.

Schulze assured the board access to residents and businesses located on the road would not be restricted and school buses and other essential services would be exempt. He said the ordinance possibly could be amended to allow longer combinations.

Supervisor James Fuller said the board would not make a decision right away, but would evaluate the information.

Schulze plans to present the information to Carroll Twp. supervisors during their Aug. 12 meeting.

In other news, Kraig Nace explained changes to the area’s advanced life support should not affect service. Due to change of ownership of local hospitals, West Shore EMS would change its name to Penn State Hershey Lifeline, LLC this fall.

West Shore provides advanced life support service to Perry County, and Nace said the change would have no effect on operations, and local ambulance associations (Duncannon and New Bloomfield in Wheatfield’s case) will still be providing basic life support services.

Nace reported call volume is beginning to return to normal after having a sharp decline during the COVID-19 shutdown. He said calls are trending to a more severe nature. People may be trying to avoid going into the medical system if possible, he conjectured.

Fall cleanup is scheduled for Sept. 17 through 19.

Codes officer Lester Nace said a reasonable solution was arrived at over property access for Ryan Myers. Sight-line issues prevent a conventional driveway permit, but a limited access with strict usage guidelines could be approved. Myers is the only one permitted to use the access and it is recommended a spotter be used for entering the roadway.

The township has the right to pull the permit if conditions are not met.

Travis Clapper was appointed to fill a vacancy on the planning commission.

Warning issued about robocalls seeking to suppress voting in November |...