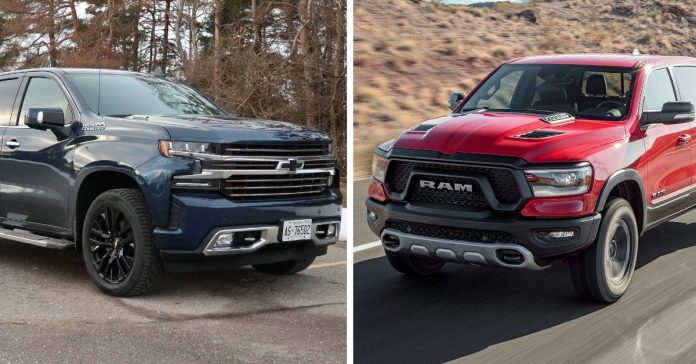 Times are a-changing, and with it, Ford is being challenged repeatedly, by RAM and even the Chevrolet Silverado.

The Ford F-Series has been reigning supreme in the US from 1981; and none of the other pickups have come close to its sheer popularity and largesse in sales. And they reached top position by dethroning the Chevrolet trucks of their time. So can there be strong enough competition that ends up dethroning Ford?

Of course, it’s not as if the other contenders are not as good as the F-Series. No automobile manufacturer in their right mind would make a bad truck. Ford’s supremacy in pickups has come because of many reasons including their unbeatable work prowess. Plus, once you have been crowned the king, it’s not easy for another to throw you off the throne, is it?

Continue scrolling to keep reading
Click the button below to start this article in quick view.

But times are a-changing, and with it, Ford is being challenged repeatedly, by RAM and even the Chevrolet Silverado. But which of these can end up dethroning the Ford F-Series, if possible?

RAM Is Winning In The Under 35 Category

According to GM Authority, RAM has managed to overtake Ford F-Series sales in one particular demographic, that of people under 35. And this is a rather coveted section of the youth, and who want their pickup trucks not just to be sturdiest but also the best-looking and smoothest-riding. In 2019, RAM sold more than 43,000 trucks to the under-35 category, a 10% increase over 2018 while Ford sold a little over 40,000, with a 14% decrease in sales in this demographic.

One way RAM has been able to do this is by letting the older model continue its sales run as a cheaper version while letting the newer and more expensive model appeal to the middle-aged generation who have more spending power. Plus, when it comes to trims, buyers are spoilt for choice with the RAM.

In the last decade, RAM has tripled its market share when it comes to truck sales. It has done so by eating away into the sales of the Ford F-Series and the Chevrolet Silverado by constantly reinventing itself to become better and more powerful.

According to USA Today, in 2019, RAM dethroned Chevrolet Silverado as the reigning number two truck and gained the second-most selling slot for itself. The reason has to be the feature-loaded and revamped RAM 2019, and the fact that RAM did a good job with the truck.

It’s not as if the Chevrolet Silverado is taking all of this easy because the quarter one sales of 2020 show Silverado on an upward swinging graph. For 2020, the Chevrolet Silverado is proving to be one of the ideal work trucks in the market, reflected by the sales. RAM sales are increasing as well but Ford’s F-Series is actually on a downward spiral. Could the all-aluminum body be to blame? Or are Chevy and RAM finally catching up to Ford’s prowess, and Ford has become a bit lax what with the launch of its electric line?

For a truck that doubles up as work and lifestyle, it seems the RAM giving some tough competition to Ford.

Of course, many pickup truck loyalists may still hanker for the Ford F-Series, the hardiest workhorse there is, especially as it is also the cheapest when it comes to the base price. The biggest win Ford has is that it still hauls and tows more than any other pickup.

Ford trucks still have the more hauling and towing capacity, as well as a fantastic choice of engines, be it gas, diesel, or hybrid. Plus Ford has also announced its new electric pickup, to be out sometime in 2021/22.

That said, RAM has the legendary Dodge Hemi V8, an engine that was once so powerful, NASCAR banned it. Those days are long past but the Hemi is still one powerful diesel engine. RAM also boasts an all-new eTorque hybrid option for regenerative braking to better fuel economy.

RAM trucks have an edge over Ford because they offer more trims and are feature-stuffed on the inside. The interiors are a lot better as well and nothing beats the ride quality of a RAM which is far smoother than a Ford pickup. Plus even the basic trim of RAM trucks comes with far more features than does a Ford. For instance, the RAM 1500 base models come replete with the UConnect infotainment system and a 5-inch touch screen, along with Bluetooth and push-button start.

Not to say that the Ford F-Series does not offer upscale interiors in its top trims but even then, the real-wood and genuine leather touches in the top trims of RAM leave the Ford looking less than polished, so to speak. Also, the base trims of Ford lack even basic features, which on the plus side, account for the lowest trim of the Ford F-150 being cheaper than that of RAM 1500.

Ultimately, it boils down to brand loyalty. But if RAM keeps leveling up and Ford gets comfortable in its top spot, things may take a turn for the different and see RAM end up dethroning Ford. And this, in turn, may make Chevrolet happy because it is closer to sales to RAM than it ever has been to Ford…

NEXT: Ford F-250 Tremor Vs Ram Power Wagon: Which Truck Is Better?

Arun Singh Pundir has been a longtime media crackerjack and worked most of his life in sales and marketing. In 2018, he officially flipped and switched sides to the editorial. He lives with his wife, two rascally sons, and is a car and motorcycle nut in his free time. Not that he has too much free time. He currently writes for HotCars on anything that has any number or kind of wheels. He considers his Isuzu D-Max V-Cross, Suzuki Ciaz, and Royal Enfield Classic 500, the three current flames of his life. His dream is to drive around the world; even if it takes more than eighty days.