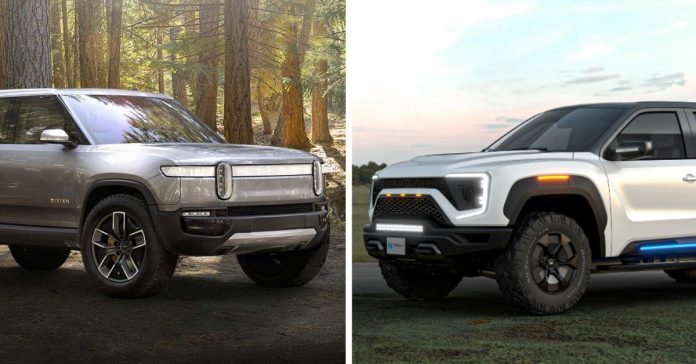 There are a lot of other companies racing to get their trucks ready for the market, but so far, Nikola and Rivian are well ahead.

Ever since Tesla started producing truly viable electric vehicles, people have been waiting to see when they would finally produce an electric pickup. Although we have finally seen what that will look like, it is now certain they going to get beaten to the market by one of the new players.

It is a long overdue innovation, with so many people shifting from family cars to pickup trucks for their practicality and leisure appeal. It has been an interesting battle to watch, with Tesla doing their usual PR thing, shooting for the moon on almost every claim they make and not really revealing any actual launch date. When they do, it will likely be pushed back like all their other launches. Rivian has been a little more practical, recently uploading a video of their trucks traveling all the way from Patagonia to Los Angeles and they are all set to deliver their first trucks in the 4th quarter of 2020!

Nikola, with arguably the best-looking truck offering are also getting things moving. Already taking pre-orders as they plan to launch their truck in 2022, they also have the added bonus of offering a hydrogen fuel cell version as one of their options on the Badger truck.

There are a lot of other companies racing to get their trucks ready for the market, but so far, these two are well ahead; so, which one will actually be the best?

One of the key features of the Rivian is its towing capacity of 11000 pounds which is just as good as it’s gas and diesel rivals. Where other EV trucks are mostly working off theoretical figures the Rivian has been tested in the real world. The Long Way Up might be a glorified promotional video, but it proves their vehicles work in the real world as leisure vehicles, and most importantly as pickup trucks carrying loads all the way from Patagonia.

Another key factor is performance, and the 180-kWh equipped truck will be able to do 0-60 mph in around 3 seconds. It has a four-motor configuration, sending power to each individual wheel which should be extremely useful off-road. It rides on an air suspension, which allows the truck to have a variable ride height from 8 to 14 inches. Inside it has all the bells and whistles you would expect from a modern EV, or leisure truck for that matter with two big screens for the gauges and infotainment.

For any EV, range is crucial, and at 400 miles that is more most other EVs can offer at the moment. It also has a quick claimed charge time, getting from 5 to 80% in less than an hour.

Related: Check Out The Rivian R1T: The Futuristic EV That Will Embarrass Your Gas Guzzler

The Nikola is an altogether different prospect, with so much potential it is impossible to ignore. The future is looking ever brighter for hydrogen fuel-cells contrary to what Musk may think. Nikola have already shown the world what they can do with their semi-trucks which will be built by Iveco, they will also be partnering with an established manufacturer to help produce the Badger.

It is clear that Rivian have the head start, and Tesla have the EV brand but with the right execution and pricing, the Nikola looks to be the truck to beat! Although it will have smaller battery packs, the fuel cell option will eliminate any range anxiety. The standard electric version will be on par with the 135-kWh Rivian’s 300-mile range. The obvious advantage of the fuel-cell version is that range gets doubled to 600 miles!

If looks were the only consideration, we think the Badger would have it sewn up, with serious presence even if the dimensions are very similar. Performance-wise the two are very similar to the Badger claiming a 0-60 mph time of 2.9 seconds, and judging by the size of the battery pack the real-world towing capacity should also be very similar for the fuel-cell version (no figures released at the time of writing).

In reality, there is only one EV truck at the moment. That is the Rivian, they have the first mover advantage, without any doubt those first trucks will have their teething issues, but any first generation vehicle will have that problem. They will also force other manufacturers to bring out better products, and give the consumer more options.

In the near future one of those options may well be the Nikola, to this point an unknown quantity but by partnering with existing manufacturers they should be able to execute their first Badgers better than any other new player will be able to. It is all still guesswork at this point, but one thing is for sure, Tesla has some catching up to do!

Luke Zietsman is an all out automotive enthusiast based in The Philippines. If it has two or four wheels he has either owned it, researched about it or dreamed about it.

Stories from our communities: Part one – El Camino College The...

‘I was always really proud of him’