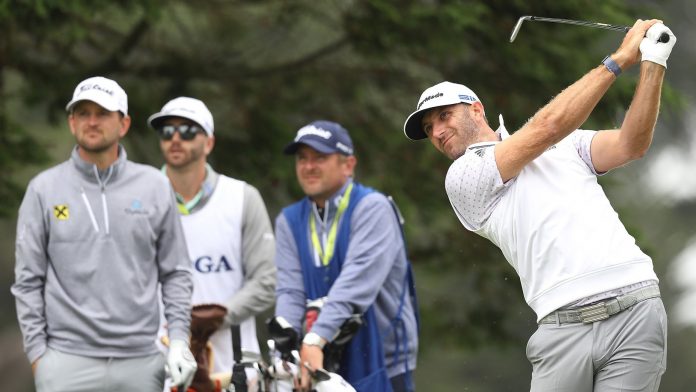 Dustin Johnson’s only major title came at the 2016 U.S. Open at Oakmont. Will he get major No. 2 on Sunday?

Check in each day of this week’s PGA Championship for the unfiltered opinions of our writers and editors as they break down the hottest topic in the tournament, and join the conversation by tweeting us @golf_com.

Michael Bamberger, senior writer: Koepka. He’s not playing bad two days in a row. DJ may find it’s not riding a bike, not in a damp wind especially.

Sean Zak, senior editor (@sean_zak): It is absolutely insane that we are here (and yet, is it insane at all?) with Brooks Koepka again. He’s going to win. He’s going to shoot 32 on the front, make eight straight pars and finish with a birdie on 18 for a 66 and that fifth major.

Josh Sens, senior writer (@JoshSens): Koepka. After those three consecutive bogeys, you could almost see the switch flip. “Oh, I better get serious about this again.” And he did. Think of that closing birdie as foreshadowing. There will be no hiccups tomorrow.

Zephyr Melton, assistant editor (@zephyrmelton): My heart says Scottie Scheffler. My mind says Dustin Johnson. DJ kind of snuck up out of nowhere on the leaderboard after a double bogey seemingly knocked him out of contention midway through the round. Then he ripped off four back-nine birdies for one of the most impressive nines of the week. Brooks Koepka isn’t going to chase him down this time.

Dylan Dethier, senior writer (@dylan_dethier): Bryson DeChambeau. He’s talked about adding up those little advantages all over the course to become the casino — here’s his chance to prove it. Starting the day slightly under the radar might be just what he needs to bust through in a big way.

Nick Piastowski, senior editor (@nickpia): I picked Collin Morikawa at the start of the week. I’m picking him three-quarters of the way through the tournament. Cool, calm and California. Love the demeanor. Love the familiarity. A rising star in golf rises to the top.

Jessica Marksbury, multimedia editor (@jess_marksbury): I’m sticking with my pick from the beginning of the week: Collin Morikawa. He’s two shots back and played his best round of the week on Saturday. He’s a young player without any outsized expectations, plus he’ll have the benefit of avoiding the pressure of the final pairing, so he can just relax and post a number.

Jonathan Wall, managing editor, equipment (@jonathanrwall): It’s Brooks Koepka. He’s won the last two PGAs and four of his last 11 major starts. And if you saw his post-round presser, you know his swagger and confidence couldn’t be any higher. Picking anyone other than Brinks Truck feels like a losing proposition.

Luke Kerr-Dineen, managing editor, instruction (@lukekerrdineen): All this talk about Brooks — glossing over the fact that his ball-striking looked uncharacteristically sketchy at points today — has us forgetting about the guy who’s actually in the lead: Dustin Johnson, who shot 65 with a double bogey, who has won a major on a tough course before, and whose weakest part of his game (his putting) leads the field this week.

Josh Berhow, managing editor (@josh_berhow): Dustin ranks 139th this season in Strokes Gained: Putting, yet he’s first this week, gaining nearly seven(!) strokes on the field through three rounds. He’s found something (he tinkers often, and switched up his putter again this week). He’s gotten better on the greens every round, and while he might not repeat his lights-out performance from Saturday, I think he’ll do enough to win. He’s got a one-stroke lead, and at 36, he’s been here before. It’s time for him to get major No. 2.

Traffic is back, but still nowhere near ‘normal’ – News –...