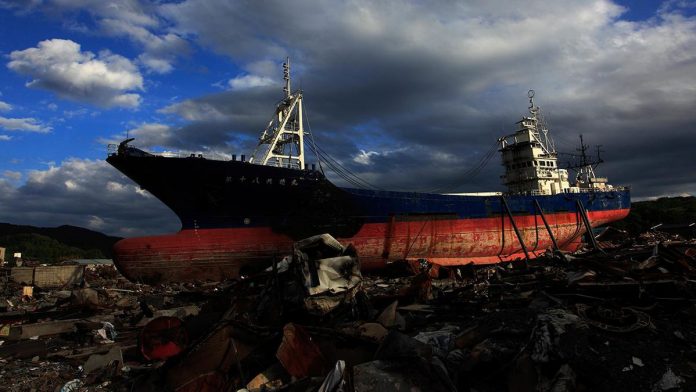 On March 11, 2011, a 9.1-magnitude earthquake triggered a powerful tsunami, generating waves higher than 125 feet that ravaged the coast of Japan, particularly the Tohoku region of Honshu, the largest and most populous island in the country.

Nearly 16,000 people were killed, hundreds of thousands displaced, and millions left without electricity and water. Railways and roads were destroyed, and 383,000 buildings damaged—including a nuclear power plant that suffered a meltdown of three reactors, prompting widespread evacuations.

In lessons for today’s businesses deeply hit by pandemic and seismic culture shifts, it’s important to recognize that many of the Japanese companies in the Tohoku region continue to operate today, despite facing serious financial setbacks from the disaster. How did these businesses manage not only to survive, but thrive?

One reason, says Harvard Business School professor Hirotaka Takeuchi, was their dedication to responding to the needs of employees and the community first, all with the moral purpose of serving the common good. Less important for these companies, he says, was pursuing layoffs and other cost-cutting measures in the face of a crippled economy.

“Many Japanese companies are not that popular with Wall Street types because they are not as focused on gaining superior profitability and maximizing shareholder value,” he says. “They talk consistently instead about creating lasting changes in society.”

Their reward for thinking beyond profits? These businesses tend to live a long time. In fact, on a global map, Japan stands out for corporate longevity; 40 percent of companies that have remained in existence more than 300 years are located in the country, according to Takeuchi’s research.

Based on interviews by Takeuchi (pdf) and his HBS students, who have studied businesses rebuilding in Japan for nine years, here’s a snapshot look at how the leaders of four companies jumped into action soon after the tsunami devastated the area.

CEO Takeshi Niinami of Lawson, a chain of convenience stores, watched out his Tokyo office window as skyscrapers swayed. Just minutes before the tsunami reached the Tohoku shore, he sent an order to employees: “Deliver food to disaster victims within seven days. And disregard cost.”

During the two vulnerable weeks before government relief kicked in, Lawson delivered 200,000 prepared meals to victims, including onigiri rice balls, bread, and cups of noodles.

The company also took care of its own in an area where 13 employees, including store owners and managers, died in the disaster. Niinami’s managers tracked down staff members by foot, securing them housing in hotels, finding supplies for displaced workers, and assuring franchisees whose stores were destroyed that they didn’t need to worry about finances.

Meanwhile, rather than focusing company relief efforts in Tokyo, where the majority of Lawson’s business was located, Niinami zeroed in on the devastated Tohoku area, knowing it would be a costly decision. In hard-hit Soma City, fear was settling in about possible contamination from the failing nuclear reactors, even though it was far enough away that exposure to radiation was unlikely. Truck drivers were refusing to deliver supplies to the city. Niinami intuitively understood that reopening a convenience store there would bring back a sense of normalcy and create hope for the city’s future, Takeuchi says.

So, he called on franchisee Etsuko Kato to reopen a Lawson store in Soma. Kato had seen devastation as well. The tsunami had claimed two of her four Lawson stores and had destroyed her house, forcing her to a refugee shelter. Her mother-in-law and pet cat were still missing.

But Kato, whose husband had died four years earlier, had shown strength by overcoming personal struggle before, and she knew firsthand what supplies fellow shelter survivors needed most. Kato accepted the challenge, reopening her store 11 days after the earthquake struck. Soon afterward, seeing customers flocking to that one store, other stores opened one by one as people in the area regained confidence that life was returning to normal.

Niinami’s company also donated lunch to Soma City elementary school students for three days in April before the school could get lunch service going again. When he received an outpouring of gratitude from the mayor and schoolchildren, especially for the desserts, tears sprang to his eyes. “I never ordered that,” the CEO, who earned his MBA from HBS, told Takeuchi. “It was my employees who decided on their own to add dessert for the students.”

Wise leaders, Takeuchi notes, “bring different people together and spur them to action.”

They are called the “Yakult Ladies,” a team that delivers probiotic drinks manufactured by Yakult to customers’ homes. Shortly after the earthquake and tsunami destroyed Fukushima, CEO Hiromi Watanabe heard that these workers were fearful the region might never recover, that people without water, electricity, and food would have to flee, the company would lose all its customers, and employees would lose their jobs.

Yakult was certainly hurting—the company’s CFO noted that Yakult had lost 30 percent of the market and suggested reducing the salesforce. Instead of cutting staff, however, Watanabe took the opposite approach, reassuring employees the company would do everything it could to retain jobs, deliver health and emotional support to victims, and contribute to the recovery of the community, even if it meant “using all cash and earning reserves of the company.”

He distributed $300 in cash to each Yakult Lady from the company’s safe, since banks were closed; used the firm’s delivery center as a temporary shelter for employees and their families; and guaranteed jobs to the Yakult Ladies forced to evacuate their homes.

When the supply of the probiotic drinks dwindled due to the Yakult factory shutting down and the Yakult Ladies ran out of products to deliver, some decided on their own to deliver water and instant noodles to their customers, for free. When Watanabe found out, he urged the workers to deliver more items to victims at shelters.

Watanabe could have put Yakult on a different course after the disaster. Colleagues suggested he close the company’s operations until production could resume, noting that employees could claim government compensation. But Watanabe wanted to keep going as best as possible: “I felt that we could regain the loss of our earnings in three years. But we would not be able to restore the trust of our customers for years if we failed to meet their needs at a moment of crisis,” he told Takeuchi.

With the company’s coffers nearly empty, Watanabe negotiated a loan and continued to retain the Yakult Ladies, paying them 80 percent of their typical pay. Once delivery of Yakult products resumed, it took just five months for sales to reach the same level as the previous year.

“Our HBS students went with the Yakult Ladies while delivering these drinks in Tohoku [years later], and they couldn’t believe what they saw, as customers gave little gifts to the ladies and said they have never forgotten March 11 and were so grateful for what the Yakult Ladies did for them at that time,” Takeuchi says.

“Employees at all levels should feel encouraged to respond flexibly and creatively to do what must be done for the common good, including those on the front lines.”

Makoto Kigawa, CEO of Yamato—a home delivery service of everything from fresh food to skis and golf clubs—sent out a message to all 10,000 employees in the Tohoku region soon after the earthquake hit: “If help is needed, then help. Don’t worry about profits.”

Kigawa, who believed it was Yamato’s social mission to restore services as quickly as possible, managed to resume deliveries 10 days after the earth shook. Inspired by his drivers shuttling goods to survivors on their own, Yamato mobilized 500 employees and 200 trucks on March 23 to voluntarily deliver relief supplies to evacuation centers in the Tohoku region. The program was initially supposed to last two weeks but continued for eight months, until all evacuees were provided temporary housing and the government no longer needed Yamato’s help.

Soon after visiting the Tohoku area and seeing the devastation, Kigawa felt it was time to give back to an area that had previously boosted his business with the delivery of fish and agricultural products.

In April, Kigawa announced a corporate donation program to give 10 yen from the proceeds of each parcel delivery to the disaster relief and recovery effort—and in June convinced shareholders to approve the plan. The yearlong campaign raised more than 14 billion yen, about 40 percent of the company’s net profits, and paid for several important initiatives to help rebuild local industries in the Tohoku region, including the establishment of a temporary fish market.

“He made the judgment call that the right thing to do was to look after the victims first and foremost, not the shareholders,” Takeuchi says.

Fast Retailing keeps its lights on

Although the catastrophe damaged several of Fast Retailing’s UNIQLO stores, CEO Tadashi Yanai was intent on the company doing its part to restore a sense of normalcy. Although many other retail stores turned off their lights at night to save on energy costs, Yanai sent a message to store managers as they started to reopen: Keep outdoor UNIQLO signs on.

Yanai believed that keeping the lights on would be important to the community psychologically. Indeed, many customers searching for open stores were grateful to see the UNIQLO signs glowing among all the other darkened stores. “Some customers came in crying, thanking us for opening,” one store manager said.

In addition, Yanai wanted to set an example by making the first major individual cash donation to the relief effort, “so that other rich people like me will follow suit.” He also donated new UNIQLO clothes to survivors, allowing them to choose items that suited them. Yanai believed helping the community was not just the company’s duty but necessary to its survival.

“Not only does a company have to live in harmony with society, but to be accepted, it must contribute to society,” Yanai told Takeuchi. “The majority of companies that have failed did not maintain that balance. Everyone is, first, a member of society before one of the company. Thinking only about the company will undoubtedly result in failure.”

Volatile periods present the ultimate opportunity for leaders to put themselves in the shoes of those who are suffering and take action to “make the future,” Takeuchi says.

“Many companies are stuck in short-termism, focusing on a strategic plan for five years,” he says. “But a lot of Japanese companies think about 100 or 200 years from now and envision the kind of future they want to create. During the tsunami disaster, the key mindset of executives was: We have to empathize with others. And companies ought to do the same thing now, during the current crisis, empathizing with those who are suffering and trying to figure out how to help.”