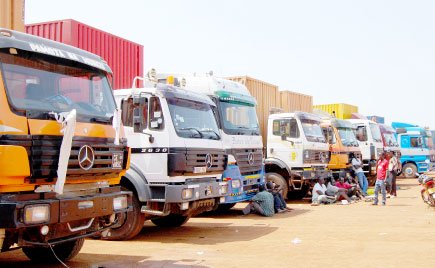 For more than a month, most of the Covid-19 cases in Uganda have either been truck drivers or those infected by the truckers. Uganda has so far registered a total of 413 cases since March and 174 are truckers.

Of the 84 cases confirmed on Saturday by the Health ministry, 52 were truck drivers who arrived in Uganda from South Sudan through Elegu border, two arrived from Kenya via Busia and 32 were those who had been under quarantine after getting contact with the truckers.

Mr Byron Kinene, the chairperson of the Regional Lorry Drivers and Transporters Association, blames, the increasing infections among truck drivers on physical exchange of documents with the customs officials at the border points.

He said Kenyan traffic officers receive and hold driving permits before handing them over to the drivers without sanitising.

“The problem is not being careless, the disease usually comes from customs officials in Mombasa who never used to test their people. The same applies to Tanzania,” Mr Kinene says.

Despite the President’s directive to block truck drivers who test positive for coronavirus from entering the country, Uganda still registers an increase in the number of coronavirus cases, among Ugandan truck drivers.

Mr Kinene attributed this to congestion at the border to delayed results. On Wednesday, he says truck drivers at Elegu Nimule, Busia, Malaba have to wait for two to five days for their results except Mutukula border where truck drivers get their results earlier due to GeneXpert machines that were launched there.

“There is congestion at the border because the results take three days as you are waiting at the border. While at the border, you are interacting with other drivers as you wait. It is only at Mutukula where we do not have to wait for results that long,” Mr Kinene explained.

According to truck drivers, this poses a danger during the three to five days of waiting.

Mr Kinene explained that during the demonstrations, a number of people were not wearing masks and there was no social distancing.

“For the first three days, they will be patient. But on the fourth day, they will complain and the fifth day, they will demonstrate. They come prepared to spend two days but when days increase to five, they reach a point even when they have no money to buy the mask,” Mr Kinene says.

The drivers’ association now wants government to let the drivers move without being tested but with constant monitoring.

Mr Emmanuel Ainebyoona, the senior public pelations officer at the Ministry of Health, says truck drivers with certificates from Kenya indicating negative results are allowed to proceed into the country.

“The only thing we are doing now is ensuring the certificate issued is uniform and has unique features such that people do not forge. But we are also going to implement the journey management system,” Mr Ainebyoona says.

Truck drivers have also disputed claims that they are the main group of people spreading Covid-19.

Chase Elliott Scores a New Sponsor After His Spectacular Run in...