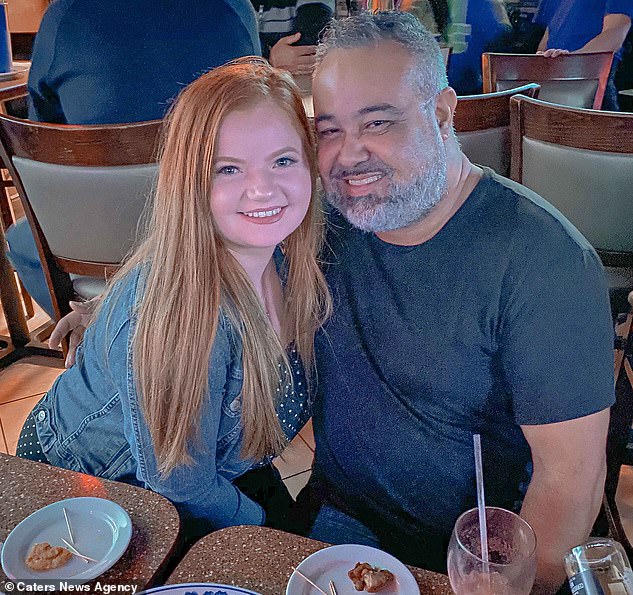 A doting wife has revealed how her husband, who is 27 years her senior, was accused of kidnap due to her baby-faced appearance.

Tori Smith, 22, from Baltimore, said she was left in hysterics when a concerned colleague spotted her at work with truck driver Eddie, 49, and called the police.

They were pulled over and Tori was asked what relation she was to Eddie, forcing her to explain they’re a married couple.

Homemaker Tori added that she has also been accused of using Eddie as a ‘sugar daddy’, and she revealed that she has had to cut some people out of her life for questioning their relationship.

But the couple, who met in November 2017, insist their age gap romance is ‘no different to any other.’

Tori Smith, 22, from Baltimore, said she was left in hysterics when a police officer asked ‘what her relation’ was to Eddie, 49, after they received a call of concern from one of the truck driver’s colleagues who thought she had been kidnapped (pictured, Tori and Eddie eating out) 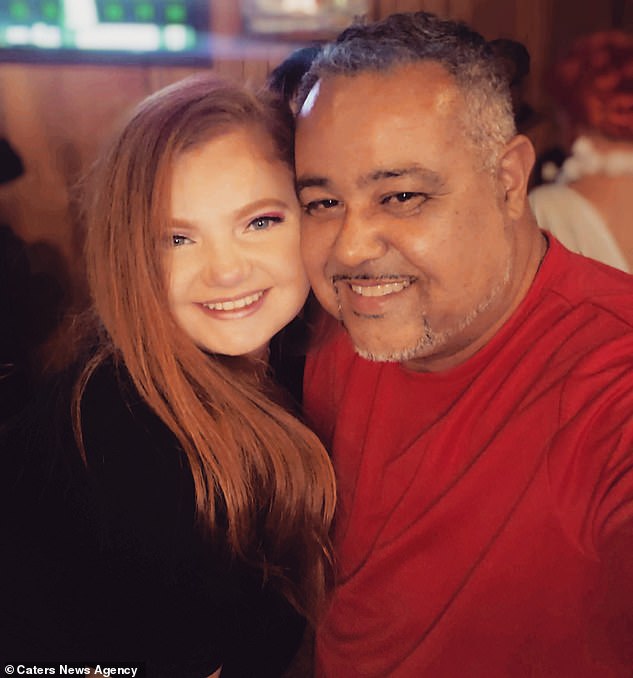 The baby-faced wife said people often assumed that Eddie, who is 27 years her senior, is her sugar daddy 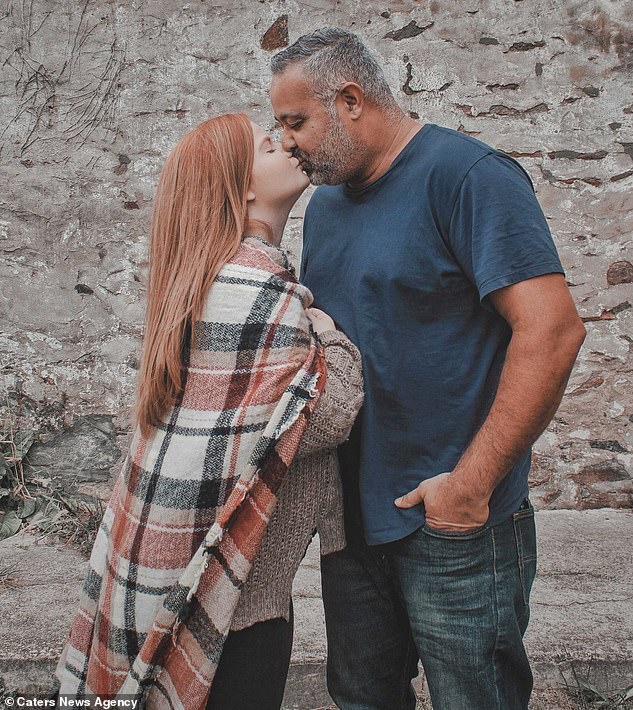 The couple who met in a karaoke bar bonded over their love of singing and travel, as well as being attracted to each other

‘I often join Eddie whilst he’s at work because it gets me out of the house, and we love hanging out – even if it is driving around for the day,’ Tori said.

‘But a few weeks ago, we were at the facility waiting for the truck to get loaded, and I went to use the bathroom which is when someone must have spotted me and assumed I was just 13.

‘As we went to pull off, two police cars pull up and asked Eddie to step out of the truck – we were so confused.

‘The cop asked me “what is your relation to that man?”, and I explained he is my husband and asked what is going on, which left us in hysterics. 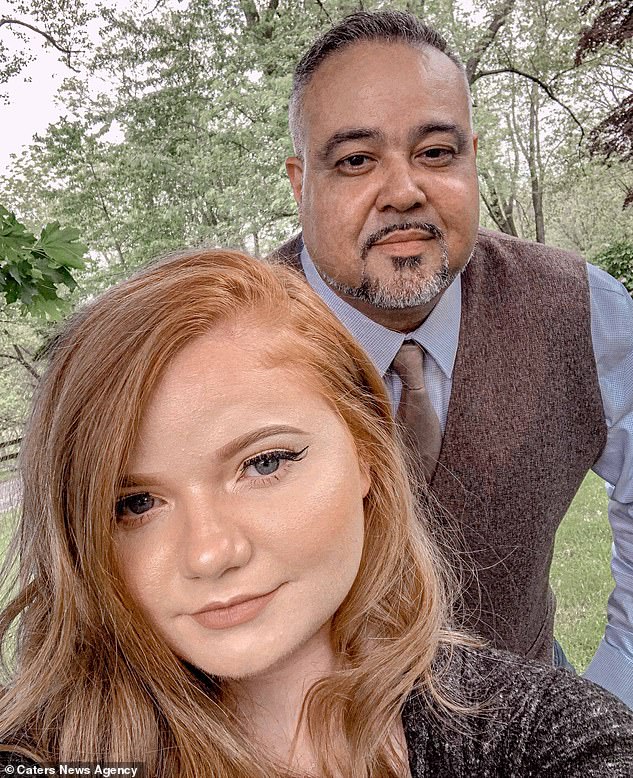 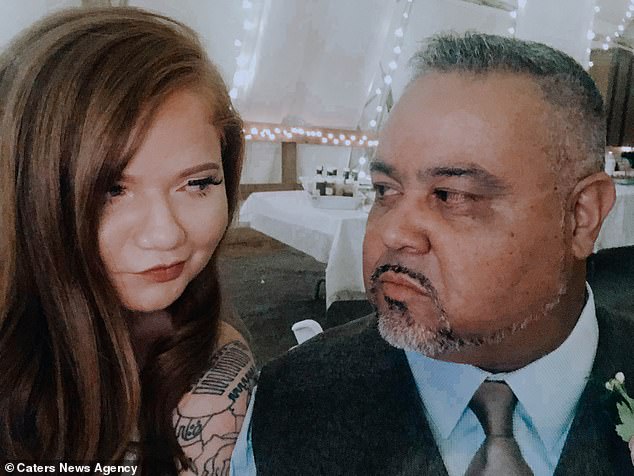 The young wife (pictured at a wedding), said Eddie and her were soulmate and that she had had to cut some people off her life because they could not accept her relationship

‘I couldn’t believe someone thought my husband had abducted a teenager – I showed my ID to prove my age and the police officers started laughing too.

‘It is difficult for others to understand that a younger person can be in love with an older man, but I have never connected with someone so well in my life.

‘We are soul mates and we know it, so people’s assumptions don’t faze us. I have cut some people off due to them not being open about me dating him. 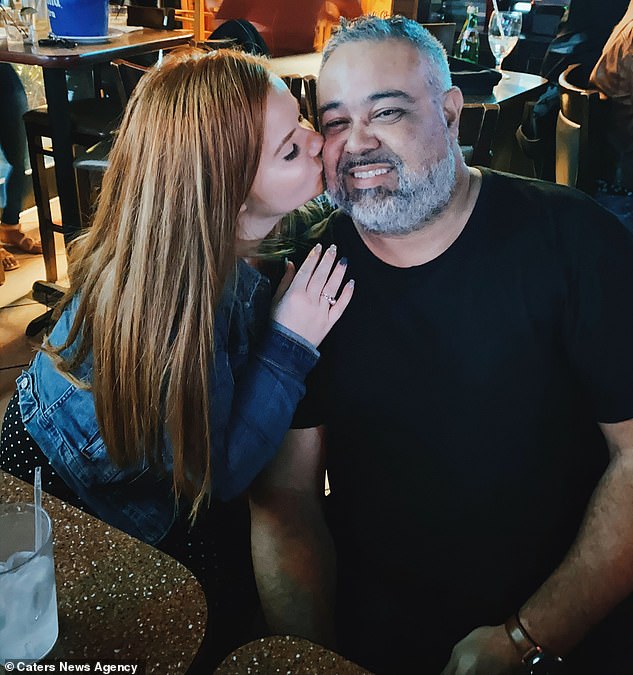 Pictured during their engagement. Tori said she never connected with someone the way she did with Eddie 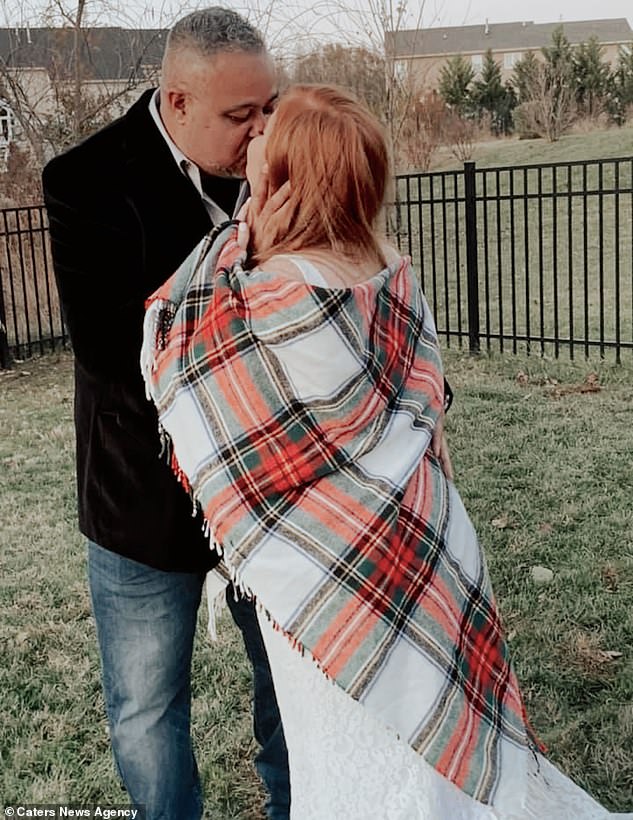 ‘Many assumed he is my sugar daddy, which is absolutely wrong and insulting.’

The love-struck couple met in a karaoke bar and were initially attracted to each other’s looks, as well as sharing a love for singing and travelling.

They tied the knot on November 24 in 2019 and plan on having children in the future. 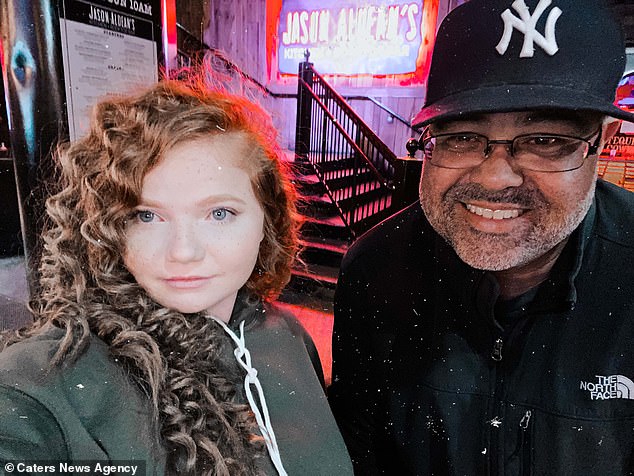 The couple, pictured, who share many interest, including singing, are planning on travelling before starting a family 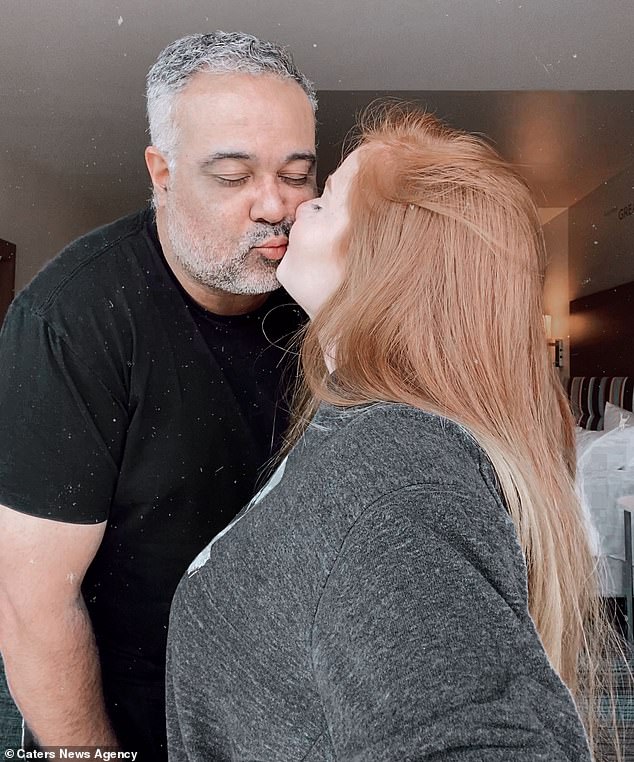 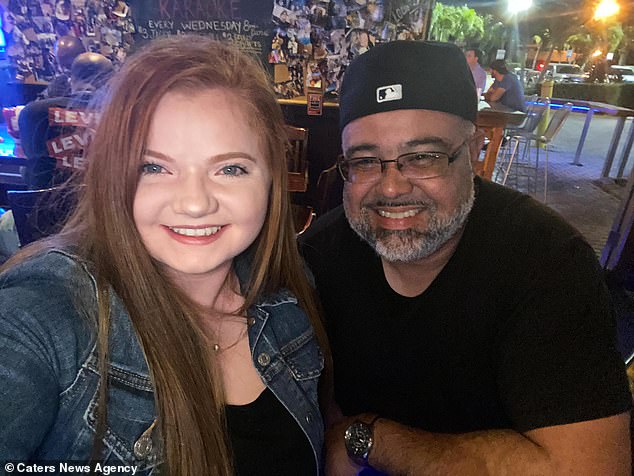 Pictured together on a night out. Tori had to show her ID to police officers in order to convince them Eddie was indeed her husband

Tori added: ‘We are just like any other couple; we love going out, exploring new places and curling up to watch movies.

‘When Eddie proposed to me it was the best day of my life – we can’t wait to spend the rest of our lives together.

‘We have spoken about children but we aren’t ready yet – we still have a lot of traveling to do.’ 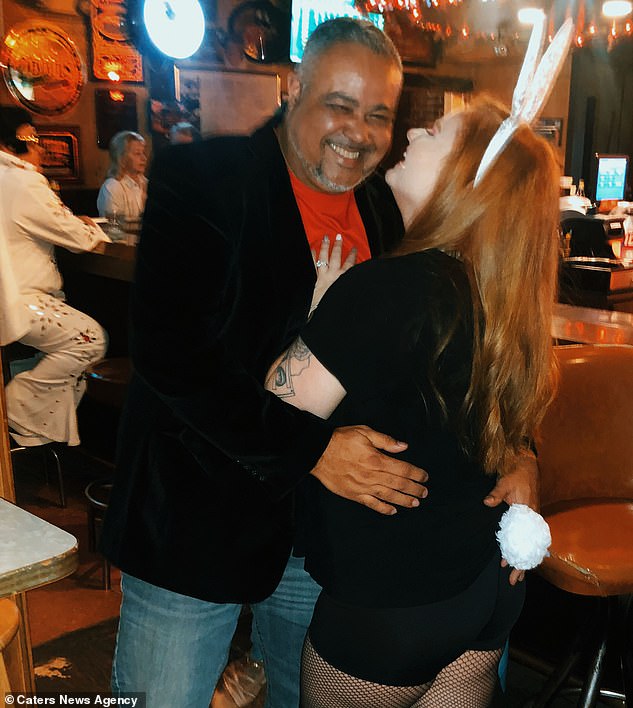 The baby faced spouse said Eddie and her (pictured) were like any other couple, and no different to other age gap love stories 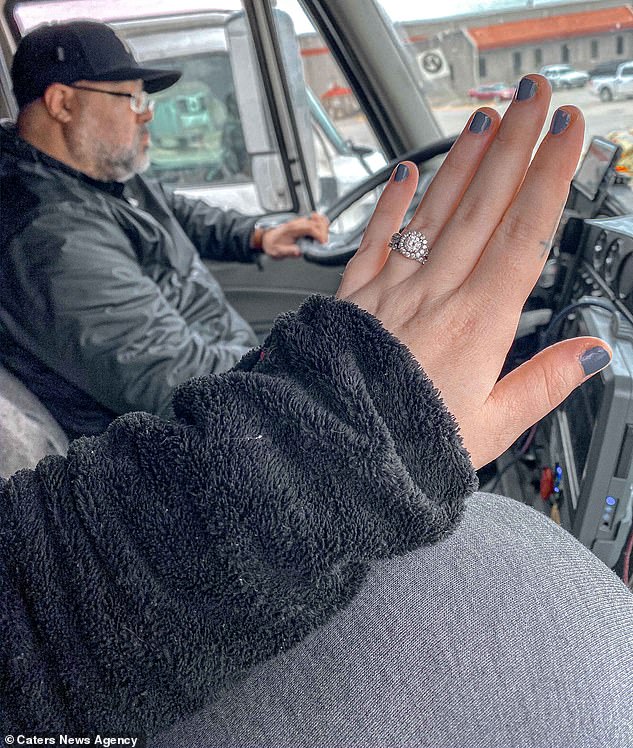 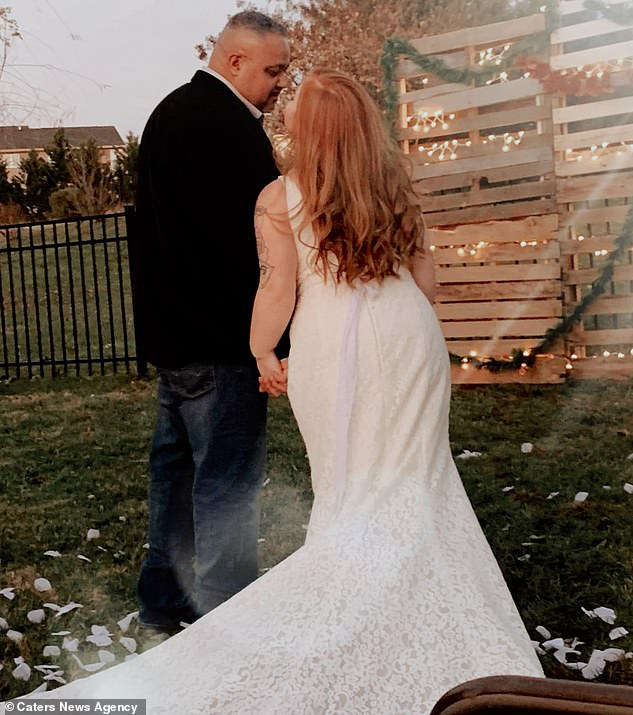 Tori, pictured with Ed on their wedding day, said she was shocked that people thought Eddie could have kidnapped her due to her youthful looks

GM Posts an Improbable $294 Million Q1 Profit Thanks to Truck...