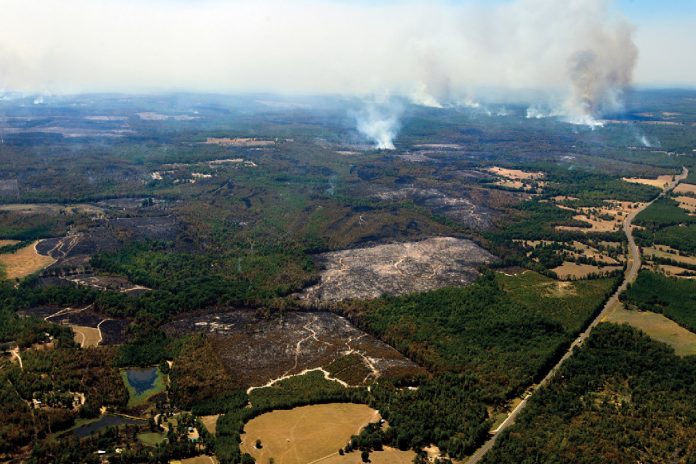 TEXARKANA — Local wildfire risk is low but both Texarkanas’ fire departments are trained and equipped to fight any wildland fires that break out, the cities’ fire marshals said Wednesday as enormous, intense blazes burned in the western U.S.

Because of dense development, large vegetation fires are not possible in most of either Texarkana, but the risk increases nearer the reaches of the city limits, Texarkana Texas Fire Department Marshal Chris Black and Texarkana Arkansas Fire Department Marshal Jim Wall said in separate interviews. Wildfires are more likely there and in the more open, rural parts of the region outside the Twin Cities.

Gallery: Wildfire risk is low here, but firefighters are ready

The Bear Creek Fire of September 2011 shows how destructive wildfires in the Texarkana region can be. That fire burned more than 40,000 acres in Texas’ Cass and Marion counties, prompting a multi-department firefighting response and emergency evacuations.

Texarkana recorded 52 days that summer when the temperature was 100 degrees or higher, according to National Weather Service records. The intense heat and drought, followed by winds from Tropical Storm Lee in the Gulf of Mexico, created optimal conditions for a wildfire such as the Bear Creek Fire.

But such extreme conditions are not necessary for a grass or brush fire to ignite. Lightning, carelessness with fire sources such as cigarette butts, and sparks from passing trains or autos can start wildfires anywhere vegetation has grown and dried. And even after recent rain, plants can dry out very quickly, Black said.

Cooling temperatures as fall approaches do not lessen wildfire risk. In fact, Black said, as vegetation that has flourished during the summer dies off in the fall, more dry fuel becomes available for fires.

Both Texarkanas’ fire departments are ready to pitch in should they be needed to battle a wildfire in the area, starting with the necessary equipment.

On Tuesday, the Arkansas-side Board of Directors approved purchase of a new brush truck that will replace an older model in TAFD’s fleet of three. TTFD has two brush trucks in service, as well.

Brush trucks carry hundreds of gallons of water and are built to travel off-road to reach fires in wildland settings. Each is equipped with specialty hoses and hand tools such as rakes and hoes used in fighting wildfires. TAFD’s new brush truck will have four-wheel drive and give firefighters the ability to spray fires with water without leaving the truck’s cab, Wall said.

TTFD participates in the Texas Intrastate Fire Mutual Aid System, a program that makes trained firefighters available to help anywhere in the state they may be needed. In recent years, the program has deployed certified TTFD firefighters to wildland fires in West Texas and Southwest Texas, giving them experience that would prove valuable in the event of a local wildfire.

To prevent grass and brush fires in the first place, Wall and Black recommend keeping property mowed and cleared of waste such as dry leaves or fallen limbs. Such waste and anything else flammable should be kept away from houses and buildings. They also urge caution with fire, especially cigarettes and campfires, and remind residents that fireworks are illegal in both Texarkanas.

Both cities issue permits for commercial burning, normally used to clear land for development, at a cost of $1,000 on the Texas side and $200 on the Arkansas side. Residential burning is prohibited on the Arkansas side, but homeowners can apply for a permit costing $50 a year. Review and site inspection by the fire marshal is required for burning permits in both cities.

Trucking could recover from Covid-19 quicker than other sectors: ATA economist...

Taking A Look At The Proud Chevy Truck Tradition: Video

Brown and Hurley Group has an enduring passion for the road...