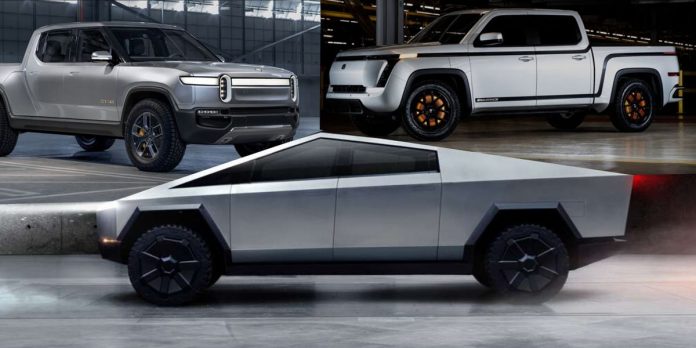 Even before Tesla’s announcement last week that it had chosen Austin, Texas, as the site of the plant that will produce the Cybertruck starting 2022, the momentum of EV pickups working their way through the pipelines of start-ups and major automakers alike had reached unprecedented levels. The same week General Motors announced a second EV pickup, promising 400 miles of range, in addition to a Hummer-branded model that will also reach production. A little earlier this summer, Lordstown Motors took the wraps off its Endurance pickup with Vice President Mike Pence in attendance. And just a few weeks ago the market capitalization of EV start-up Nikola, that plans both a pickup and a semi truck, exceeded that of Ford.

In the next two years, there will be nothing short of a tsunami of electric pickup trucks hitting the market.

With almost 10 electric pickup trucks promised in the next two and a half years, EV truck mania appears to have reached a peak — at least among those planning to offer them — all the more impressive that it has happened in the midst of a historic economic downturn and gas prices not seen since the 1990s.

But is this a hype bubble or echo chamber created by automakers, similar to robotaxi mania observed merely three years ago, or are there potential buyers streaming into dealerships at this very moment telling dealers that they need electric pickup trucks?

To be sure, it’s useful to separate the mounting surge of EV truck hopefuls into several categories — the nearly 10-strong field of EV pickups working their way to production is quite diverse and is aimed at different buyers. But it’s also prudent to acknowledge the U.S. economic outlook of the present day, one currently defined by a surge in unemployment and a significant economic downturn that may not see automaker sales return to pre-pandemic levels until 2022 or 2023, according to automakers’ own forecasts. Combined with the lowest gas prices seen in two decades, this does not quite paint a picture of favorable conditions for EV truck sales.

Skeptics tend to point one very obvious issue facing EV truck sales: It’s one thing to sell a pricey EV sedan to early adopters on the two coasts, for whom it’s likely to be a second or third vehicle in the household, and quite another to sell a truck to buyers who happen to not live on either coast, possibly hundreds of miles from a public EV charging station. That’s something that’s not dependent on the current economic or epidemiological conditions, and something that a lot of automakers have faced trouble with even in the extremely favorable economic conditions of the past five years.

We suspect that it’s helpful to look at EV adoption in the U.S. as a whole in predicting the level of buyer enthusiasm automakers can expect to see in the marketplace next year and in 2022, when the EV truck field will see several contenders on sale. It’s no secret that EV demand and the pace of charging infrastructure has been largely confined to the two coasts, even as a handful of companies have made efforts to link up the two coasts via charging corridors along the main east-west interstates. Even so, half of all EV on the road today are in the state of California, which certainly has its share of truck buyers, but is hardly representative of the entire country. Will half of all EV trucks also be bought by Californians?

Finally, in surveying the field of EV truck hopefuls, it’s evident that the sales pie will not be divided equally among the nearly 10 models. Some models are just too niche, some may prove too expensive for repeat truck buyers, some don’t plan to sell electric pickup trucks to the public at all and some start-ups currently lack a dealership network.

Will electric pickup trucks see immediate sales success, or will their adoption by buyers be tempered by various factors noted above?

Let us know in the comments below.