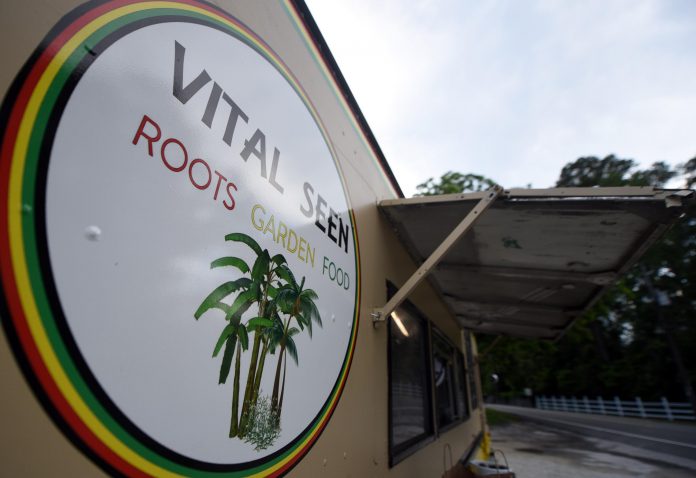 Vital Seen has world-inspired vegan fare and a Rastafarian philosophy

Vegan cuisine can carry a few different connotations. But for the Wilmington-based Vital Seen food truck, simple ingredients and vegetables really are the focus.

“It’s not really a meat substitute kind of vegan,” said Chef Tripp Engle. That’s why the tagline for the business is “Roots Garden Food.”

You might see Egyptian-style falafel made with dried lima beans and sesame seeds on the menu, as well as okra chaat masala and vegetable stews served with injera, an Ethopian flatbread made with teff.

There’s also an island vibe. The name comes from island patois where “seen” is said to show that you’ve heard and understood someone. And the philosophy behind the menu is based on the Rastafarian ital diet.

A common Rasta saying is “Ital is vital.”

“It’s that the only food necessary for life comes from the earth,” Engle said.

He likes to focus on nutrient dense ingredients, like sea moss for a popular smoothie and a pumpkin curry served with black rice, instead of traditional, starchier sides.

“A lot of this is just super good for your body,” he said.

Many locals may be familiar with Engel from the years he worked with the Circa Restaurant Group, at Brasserie du Soleil near Wrightsville Beach and at Circa 1922 in downtown Wilmington. But after more than a decade spent in a busy, hectic kitchen, he wanted a change of pace.

“I think this was the kind of food I wanted to make when I went to culinary school,” he said. “But there, you get caught up in learning the traditional methods.”

For several months, he and his business partner Willie Swain have been working to get an older food truck functioning and on the road. It was ready just about the time that the coronavirus pandemic caused a number of business restrictions locally and across the county. During the process, the partners also sought advice from established people in the local food truck scene, like Michelle Rock from Mamma Rock’s Dessert Truck.

“I don’t know if we’d be where we are without her help,” he said. “We’ve had a great response, even during a pandemic.”

They have been taking Vital Seen to different communities in recent weeks. And locals can often find the food truck at the Triangle Lounge, 5920 Wrightsville Ave., and at Eagle Island Fruit & Seafood, 500 U.S. Highway 421 N.

Engel said another focus of Vital Seen is using locally sourced ingredients, so expect specials and seasonal dishes throughout the year. Watermelon water with chia, fried whiting tacos, and plantains with salsa made recent appearances on the menu.

Tesla hits $1000 mark, Surpasses Japanese Toyota to become the Most...