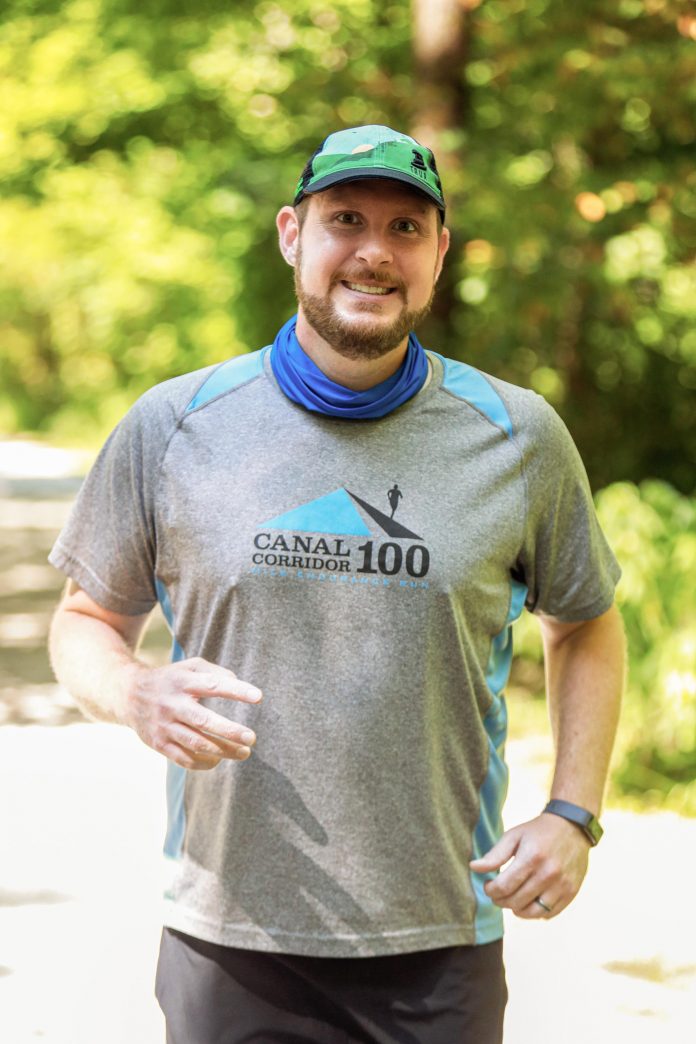 When Windham first-grade teacher Andrew Rosebaugh completed 12 half marathons, 29 full marathons and 7 ultramarathons, he did it for himself and his family, but his third and most recent 100-milers was completed for his school.

On July 11 and 12, Rosebaugh finished the Canal Corridor 100 Mile Endurance Run in 29.5 hours, which took him through Stark, Summit and Cuyahoga counties. For the first time, the Cuyahoga Falls resident used his participation as a fundraising vehicle for the Windham student food pantry, which allows students to “shop” for food every Friday.

“We’re living in some challenging times right now, and when I look back on this time, what can I say I did to help people?” Rosebaugh said. “Whether its mowing neighbors’ lawns or getting groceries for people, I want to make sure I use this time to help others. So I thought if I can do this, and someone would benefit, it would be a worthwhile endeavor.”

Like he has in past races, Rosebaugh uses his experiences to inspire his students to value perseverance, grit, positivity and healthy lifestyles, all of which have special meaning to him.

“Theres a reason I’m still there because statistically I should not have been,” he said. “I believe it was an act of God.”

Sixteen years ago, Rosebaugh was taken by helicopter to Akron City Hospital after his flat bed truck collided with a cement truck. A 9 cm laceration on the back of his head was stapled shut and a doctor told him that there was a good chance the head trauma would affect his long-term memory and speech. Another doctor told him he may never walk again.

“Those are both sobering realizations. I was 23 years old, just graduated from college to be a teacher and what do you do if you can’t speak and communicate effectively and be mobile as an elementary teacher,” he said.

Within a week though, Rosebaugh left the hospital in a wheelchair. He had no broken bones, but over the next couple of months worked through rehab and physical therapists and started running on a treadmill.

Growing up, he had played sports, but wasn’t particularly athletic, and health and fitness had not been a priority through college. But there was something natural about running on the treadmill, and he quickly cranked up the speed and the incline. Soon, he was in the better physical shape than he had been before the accident, and after two months in September 2004, he started his first job as a long-term substitute with Youngstown City Schools.

But life got in the way again. Rosebaugh was hired at Windham, he started a master’s degree and just like in college, fitness was no longer a priority.

Then it was 2009, and Rosebaugh had his yearly health screening offered through Windham Schools. His blood work showed that something was seriously wrong, and eventually he was diagnosed with non-alcoholic fatty liver disease, which had initially been ruled out because of his age.

“You shouldn’t be diagnosed with fatty liver at 28. My diet wasn’t that bad. I wasn’t running or riding, but I wasn’t living on the couch. It was a real eye-opener,” he said.

In spring 2010, Rosebaugh started walking his dogs outside, going further and further each time. One day, he wanted to see if he could run to the end of his street, about 4/10 of a mile.

“There’s something about double-digit mileage. I felt so accomplished. I went out the next day and ran another 10,” he said.

That September, he ran his first marathon, the 2010 Akron Marathon, and hasn’t stopped upping the challenge, all with the support of his wife, Sara, family and friends.

“I’ve done 40 marathons and ultras, but nothing will match the feeling of that first one, because I honestly didn’t know if I could do it,” he said.

The Monday after each race, he wears his participation medal (although his first-graders typically think the medal means he won the race), and the Monday after the Akron Marathon, he typically has at least one student who has a medal for participating in the children’s Fun Run.

“I’m just really hoping it actually happens. I think any performance-based goals are secondary. It would be cathartic to me, that piece of normalcy I can hang my hat on.”

Donations to the Windham food pantry can be sent to Windham Schools Board Office, Attn. Crystal Hickman, 9530 Bauer Ave. Windham, OH 44288. Checks can be made out to Windham Schools, with Student Food Pantry noted in the memo line.

Driver killed as train and truck crash at level crossing