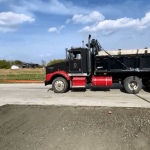 The five-foot-10, 223-pound Bighill hitched himself to a dump truck with a full trailer — total weight 32,000 pounds. He was able to put it in gear and take it for a ride.

Hey @CFL this is Southern Manitoba Style training!! Thanks to season @Wpg_BlueBombers ticket holder @harleysiemens and family for helping me put this together. 🦍 pic.twitter.com/FzjdNGArah

After Bombers’ receiver and returner Lucky Whitehead pulled a semi-truck, Winnipeg’s defensive captain had to match his teammate on the other side of the ball. The highest paid linebacker in the CFL could easily pull his cash earnings if added to the load.

Offensive players in the three-down league have 32,000 reasons to fear coming across the middle against Winnipeg with Bighill manning it with massive force.

Read original story in 3 Down Nation.