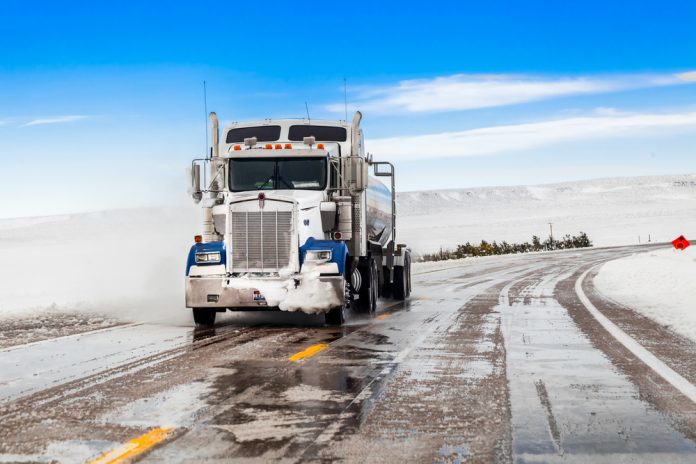 Proper truck and trailer maintenance isn’t seasonal, but as temperatures begin to swing from hot to cool – and then to cold in the months ahead – the demands and stresses on a given system can change.

CCJ spoke with several maintenance experts who each offered their recommendations for winterizing a truck.

The air brake system is prone to developing air leaks in the winter, many of which, according to TravelCenters of America Director of Technical Service Homer Hogg, are a result of poor maintenance practices.

“Perform a diagnostic while draining the tanks,” he said. “How much moisture came out? Was it contaminated with oil? Asking these questions can help identify potential problems so you can address them now, instead of on the side of the road on a cold winter morning.”

The air dryer is designed to remove moisture and contaminants from the truck’s air system, and enough moisture in the air system can lead to various problems even if it’s not frozen.

“Drain the moisture from air tanks routinely to prevent moisture from entering air valves,” advised Joe Puff, vice president of truck technology and maintenance at NationaLease. “If you see excessive moisture while draining tanks, it may be an indication of an air dryer malfunction, bad filter or excessive air leaks. Change the cartridge filter as recommended by the manufacturer or when you see signs of excessive moisture.”

Moisture in the compressed air system is a problem at any temperature, but the system in the winter makes more condensation because of the changing temperatures, which Love’s Vice President of Transportation Brent Bergevin said can lead to frozen valves and brakes.

An air dryer’s purge valve is key to removing moisture, and Bendix director of marketing and customer solutions – Air Supply & Powertrain Rich Nagel, said is especially susceptible to contamination in winter due to the abundance of water, chemical treatment, salt and sand on many roads.

Bergevin said drivers should make sure all s-cams, slack adjusters and moving parts are well lubricated because, as temperatures drop, “old grease can thicken up and cause brakes to become slow to release, causing over-heated brakes.” Cold engines require much more battery power to start, and heat is damaging to a battery. The damage done to a truck’s battery during the summer months may not reveal itself until cold weather settles in.

“Winter also means driving during extended periods of darkness, which can cause stress to your alternator,” Hogg said. “Test your alternator’s ability to produce voltage and amperage now to help avoid some serious downtime this winter.”

Puff said a simple smart battery tester or carbon pile load tester can tell a lot about a battery’s health, adding that a discharged battery can freeze at around 30 degrees Fahrenheit while a fully charged one will only begin to freeze at lower temperatures.

Transervice Vice President of Operations Berkeley Division and Puerto Rico Gino Fontana also suggested checking all exposed wiring for cuts and nicks as corrosive road deicing chemicals will use those openings as entry points into the electrical system.

“Make sure wiring connections are tight and clean and then coat them with dielectric grease or spray to prevent corrosion from developing on wiring,” he said. Belts are often forgotten, but Hogg said deserve special attention ahead of winter. When the temperature drops, belts can snap if they’re in poor condition.

“It is very difficult, if not impossible to visually detect a bad belt,” he said. “Modern belts are made of ethylene propylene diene monome (EPDM), which will not show visible signs of wear. A gauge must be used to detect the wear condition of the belt.”

Hogg recommended checking the entire belt drive system, including tensioners and pullers. The rule of thumb is to replace the tensioner during every other belt replacement.

“Lastly, don’t forget to check belt alignment,” he said. “The chirping sound that we often hear in the belt drive system is typically caused by a belt that is not aligned properly. The obvious checkpoint heading into freezing temperatures is the truck’s anti-freeze, specifically “to check the coolant freeze point for adequate protection for the climate traveled,” according Puff.

A refractometer can test a coolant’s freeze protection levels. Puff cautions the use of a floating ball type hydrometer as these can get contaminated over time and provide inaccurate results and advocated using test strips to check the inhibitor protection level.

A coolant checkup shouldn’t stop with the fluid.

Hogg suggested a complete a pressure test of the coolant system to help detect potential leak points before the mercury drops and exposes poor connections and weak components. Puff advised to inspect all hoses for weather-cracking or deterioration, check the hose routing for chaffing, look for signs of coolant seeping around clamps, check belts, fan and hub and check for debris in the radiator.

When topping off coolant, Puff noted it’s important to remember that not all coolants are compatible.

“Mixing the wrong two coolants could deplete the inhibitors, causing cavitation in the engine, which can lead to an engine failure down the road,” he said. “I like marking the coolant bottle with the type of coolant used so there are not mistakes.”

Coolant isn’t the only fluid under the hood that could warrant a change as fall temperatures begin to slide.

“Don’t waste time waiting for your windshield to defrost,” added Jon Salter, director of shop operations for Pilot Flying J Truck Care. “By adding anti-frost and anti-fog treatments, you can hit the road and be on your way.”

While not a maintenance item, Fontana suggested adding a windshield washer fluid heater or heated wiper blades to trucks that operate in extremely cold temperatures.

Safe driving habits don’t have seasonality, so Corcentric Vice President of Capital Equipment Sean Storey suggested making sure drivers get additional training on the hazards of winter driving every year before the seasons change.

“During the late summer to early fall fleets should conduct safety meeting with their drivers,” he said. “This is usually the best time to include a training session to cover winter weather driving tips and how drivers can make themselves safer during the season.

The fuel/water separator should be checked daily because the temperature difference between the ambient temperature and the fuel in the tanks can cause condensation.

“That water can be suspended in diesel fuel and even a little suspended contamination can severely damage injectors and fuel pumps,” Puff said.

As the outside air getting cooler, air conditioning system maintenance may seem less important but Finger said the reality is that it is important to ensure the HVAC system “is working properly or you could have a defrost issue on the windshield,” he said, “which could impair the driver’s ability to see out the windshield.”

Hogg recommended cycling the mode door to be sure the duct doors are moving and closing properly. “If the doors are leaking your defroster won’t receive proper airflow,” he said, “which could prevent you from clearing your windshield when weather conditions worsen.” Checking tires for tread depths and damage is a daily, not seasonal to-do, but Storey said the looming change provides an opportunity to focus on it.

“Get the tire pressure reading for each tire and any that are not at the correct pressure reading need to be inflated,” he said. “As the weather cools, a 10 degree drop in the air temperature will decrease each tire’s pressure by approximately 1 pound per square inch.”

“Extend the life of your tires by inflating, inspecting and checking valve stem caps, washing the tires and wheels and rotating and balancing the tires on a routine basis,” he said.

Keeping fuel tanks topped off provides extra weight over the tires to aid with traction on slick wintery roads and for instances when even more traction is needed, Salter suggested checking tire chains to be sure they are in working order and ready for when they are needed.

• Added weight of snow and ice can tear a mud flap, Bergevin said, resulting in potentially losing it.

• Tire chains and heavy-duty ice scrappers, Bergevin said, are vitally important for the person driving the truck and the vehicles around them. Some states also require drivers to remove snow from trucks and trailers, so not having this equipment can cause deliveries to be late as well.

• Storey said many of the best-managed fleets plan in advance for the winter driving season by pre-ordering supplies during the summer so each shop will have proper inventory to efficiently cycle trucks through in the fall, and send them out prepared to handle the challenges of driving as the temperature drops and roads get icy. “If fleet maintenance is handled by a third party provider make sure they have a program to proactively prepare your trucks for the winter driving conditions and spot check these vendors to confirm they are on top of this program for your vehicles,” he said.

Daily Egyptian | Photo of the Day: Food Trucks and Art