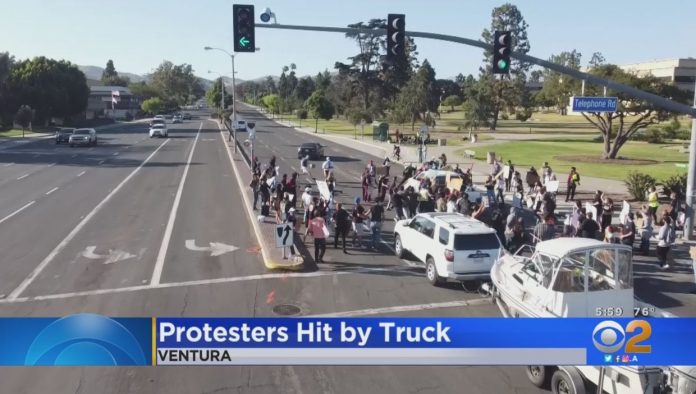 VENTURA (CBSLA) — “I was hit in the shoulder and the side,” said Dahkota Beckham after a white pickup truck drove through a crowd of Black Lives Matter protesters in Ventura last weekend.

Beckham said he was one of the first hit and alleges that the driver of the truck accelerated as he made his way through the intersection. The protesters filled two lanes of the four lane road.

“He just went for it, pedal to the metal, started hitting bodies and I saw him smile,” said Beckham.

Before the truck collided with protesters, footage showed a steady stream of traffic pass by protesters without incident.

Brittney Voutis was sitting on a nearby bench and saw the incident unfold.

“He just started driving into the crowd at which point the crowd got angry and started hitting his vehicle. Then, he accelerated and hit more people and then left the scene,” Voutis said.

Paul Aist, another witness, also says the truck picked up speed as it moved through the crowd.

“The last person I saw in front of the truck was hit by the truck flew up and over the hood towards the curb and kind of cartwhelled through the air,” Aist said. “It was horrific.”

Voutis messaged Ventura police on Tuesday asking them about the collision to which she was told it was ruled as accidental. Beckham and Atis also called police earlier in the week but have not heard back.

“There is no new video. I sent them all of that video days before,” said Voutis.

CBS2 ran the license plate of the truck and tracked down a few phone numbers. Kristine Lazar, a reporter for CBS2, spoke to a woman who identified herself as the mother of the woman the truck is registered to and said “they were under attack by the protesters and they were just trying to get away.”

“Yeah, that’s totally not what I saw,” said Voutis. “I watched the vehicle hit protesters and then continue to keep going.”

Hale County residents concerned about lack of trash being picked up

ODOT: Move over, slow down for workers