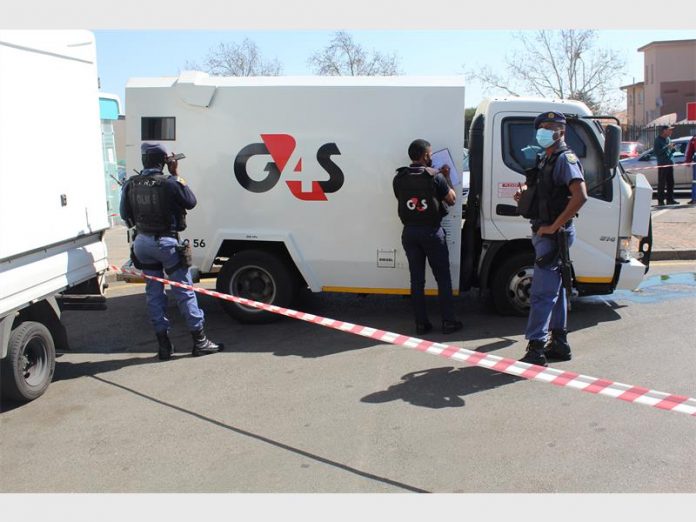 What was meant to be a normal day of shopping for a Witpoortjie resident turned out to be a live version of an unrealistic heist action movie when he witnessed the CIT armed robbery outside Pick n Pay.

The incident happened on Friday, 14 August and followed an attempted robbery of the same nature at the corner of Ontdekkers and CR Swart Roads a day earlier.

“I had just stopped in the Pick n Pay Witpoortjie parking area when I saw a man approaching from the bottle store side. He was carrying what looked like a R5 firearm. When he approached the money truck he was joined by others also carrying guns. Then I heard gunshots and saw people running in different directions.In a state of shock I quickly got out of my car, locked it and took cover behind it, as I thought it best to have the scene roll out in front of me rather than behind me,” said Jaco le Roux.

He said in the blink of an eye the men got away in two vehicles, a grey Audi A3 and a white SUV.

On the scene were members of a local security company and the CPF who assisted in securing the area before the police arrived.

“I could not believe what was happening in front of my eyes. At that moment it became clear to me that we have a crisis in this country as criminals are not scared of anyone, especially law enforcement,” said Le Roux.

A few days later, on Sunday, 16 August there was another armed robbery at a jewellery store in Cradlestone Mall.

Preliminary information suggests that the armed robbers went into the shop and took jewellery. Shots were fired in and outside the mall as the robbers fled the scene.

Members of the public who witnessed the incidents or have information that could lead to the apprehension of the suspects are urged to contact their nearest police station, or call the Crime Stop number 08600 10111.

As Woodman’s Markets deploys robots into stores, what happens to human...