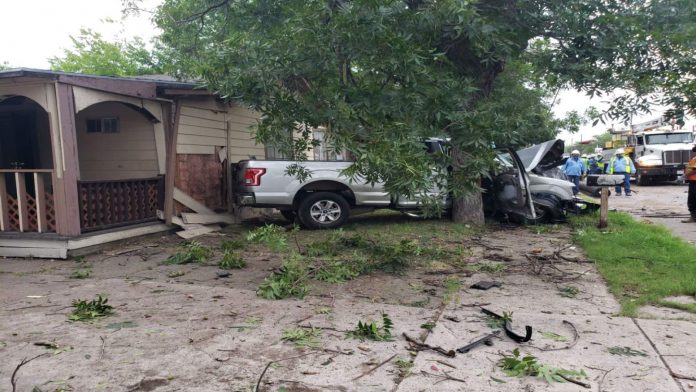 SAN ANTONIO – A South Side woman said she has a tree to thank for saving her family from injury when a pickup barreled into their home early Friday.

Police believe racing was cause of two vehicle roll over, search for two drivers continues

The truck was one of two vehicles that police believe were racing shortly before 4 a.m. in the 1000 block of Division Avenue moments before they both crashed.

The pickup and the car left a path of destruction in their wake.

The two vehicles hit another pickup and an SUV that were parked outside a home, knocked down two utility poles and knocked out electricity to more than 600 homes and businesses.

The truck then slammed into the side of Susan Ibarra’s home, leaving a big dent in her bathroom wall and hitting the wall of her son’s bedroom.

”Where it hit, it hit my son’s bed and it pushed it two feet back,” Ibarra said. “Thankfully, he was asleep in my bed.”

Ibarra said she believes it was thanks to a big tree on the side of her home that she and her family were spared from injury.

”Basically, the tree saved us. That’s what the fire department said, too,” Ibarra said. “If the tree wasn’t there, then it would’ve rammed the whole house.”

San Antonio police said it appears the two drivers were speeding, most likely racing, at the time.

After the crash, the drivers managed to climb out of both of the wrecked vehicles and run away.

”This could have happened in front of my house. And I don’t feel safe anymore,” said Gracie Campos, who lives down the street.

Campos said she has been trying for months to call attention to what she sees as a problem with speeding cars in that area.

Campos hopes someone will now pay attention and help to slow down traffic there.