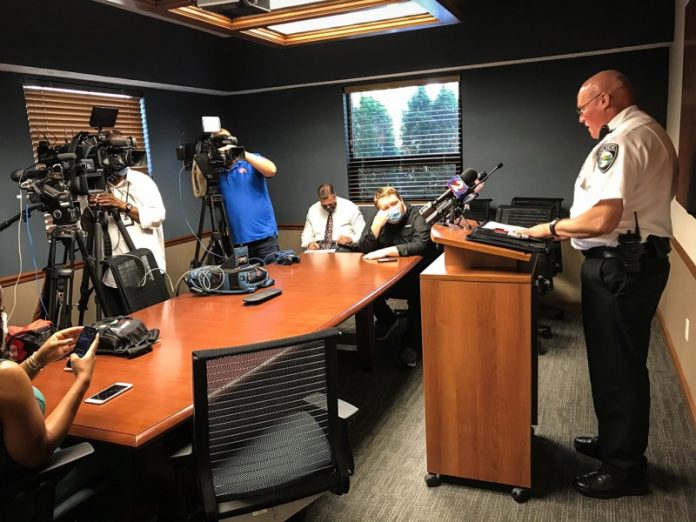 Butler Twp. Police shot a killed a 36-year-old woman Sunday evening after they say she hit and dragged an officer with a stolen pickup truck.

The officer-involved shooting is the fourth one to take place in Montgomery County since April and happened in the midst of a national debate over police use of force. Butler Twp. Police Chief John Porter said he believes the officers were protecting the public during the shooting.

“I’m very confident that these officers acted in the best interest of the lives and safety of the residents and of the general public and that there would be no issues at all with this investigation as we move forward,” he said. “I’m very confident in their actions in what they did. And once we are able to release the camera footage, I believe that you’re going to be able to see the same things.”

The Montgomery County Sheriff’s Office has launched an investigation into the shooting at the request of the Butler Twp. Police Department.

The woman killed was white, but her identity was not released Monday because her family had not been notified. The officers’ identities were also not released, however, Porter said during a press conference that one officer had worked in law enforcement for more than 30 years and the other between 10 and 15 years.

He said the officers were taken to the hospital, and the one who was hit by the truck was “banged up” and had some “scuff marks” but was doing OK. The officers were placed on paid administrative leave pending an internal investigation per department policy, Porter said.

Police initially were called to the Days Inn motel, 7470 Miller Lane, at around 4:55 p.m Sunday after a clerk said a guest reported he was robbed by a woman, according to a 911 call recording. Once on the scene, two officers found the suspect on the second floor of the motel, and she then reportedly ran from police, assaulted another man and stole his pickup truck.

Porter said because the woman was on the second floor, she was able to flee long enough to get to the truck in the motel’s parking lot.

The woman resisted arrest when the officers caught up to her, Porter said.

“The vehicle was still in the parking space when they were attempting to pull her out of the vehicle,” Porter said.

The officer who was hit was the one who shot, Porter said. It is believed right now that two shots were fired, he said. The truck crashed into a sign after the shooting. Porter said officers attempted to save the woman’s life, but she was pronounced dead at a hospital.

Porter said this wasn’t the first time the woman had run-ins with her department. He said the woman had theft and trespassing issues in the past. The chief said it wasn’t likely however that the officers knew the woman during the fatal shooting.

Teen was playing with gun when it fired, killing other teen, Dayton records say

“Evidence is still being gathered and witnesses are being interviewed,” she said. “We will not be able to comment further on the shooting due to the ongoing investigation.”

On June 28, Kettering Police shot and killed James Tober Sr. on Gay Drive. That investigation is ongoing, but police say Tober had a gun and exchanged fire with officers before he was shot and killed.

The Montgomery County Sheriff’s Office is also continuing to investigate a May officer-involved shooting that took place at Possum Creek MetroPark. A Montgomery County deputy shot Cory Driscoll after he was caught on camera not following officers’ commands. He survived that shooting.

And in April, five Dayton police officers shot Derek Wolfe. Police say Wolfe was carrying a gun and firing it in a neighborhood. Wolfe survived that shooting as well and is currently charged in Montgomery County Common Pleas Court.

What we know about Saturday night’s protests

BLM, Iowa Freedom Riders march towards I-80, around Des Moines