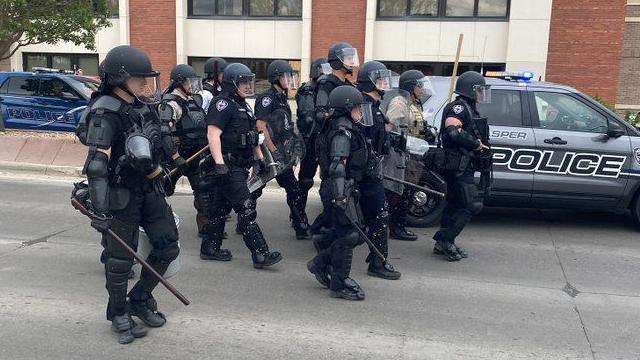 After turning back west on Second Street, the protesters stopped in the street’s intersection of Wyoming Boulevard, among the busiest intersections in Casper. Some protesters knelt and some lay down, until at least 10 Casper Police Department vehicles arrived and told them they were assembling illegally.

The vast majority of the protesters’ interactions had been peaceful, with some verbal disagreements between marchers and onlookers. However, not long before the woman was injured, a small scuffle broke out that involved a punch being thrown. It was not clear who punched whom, but police quickly arrived and broke up the situation.

The first significant confrontation seen by Star-Tribune reporters on the scene occurred as the march passed the east side Albertsons. Protesters blocked off a red pickup truck that was aggressively trailing the protest and the two sides appeared to exchange words. A few white men with AR-15s, some in tactical vests, stepped in between the protesters and the truck. They did not appear to be police officers. Other protesters were trying to calm the situation.

A reporter overheard a man yell from a truck, “They can’t beat guns. They can’t even afford guns.”

Within a few minutes, the tensions seemed to dissipate. The truck rolled away, turning into the Albertsons parking lot. One man with a long gun asked a protester if he was OK, and people passed around water near the grocery store.

Bodies piled up in Brazilian city of Manaus because of coronavirus