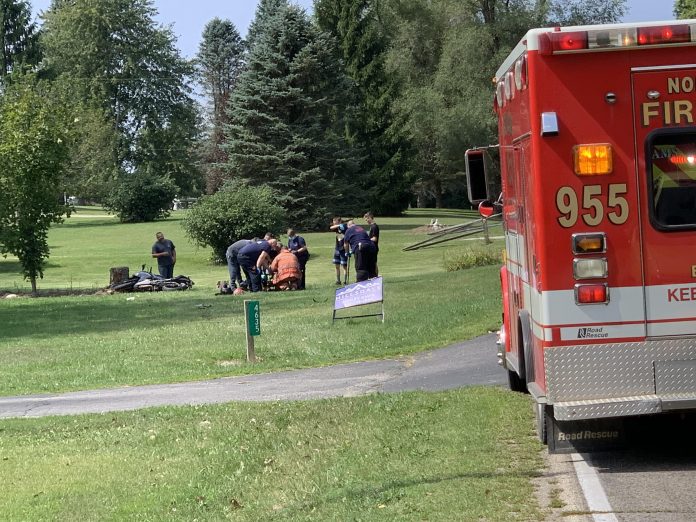 ADAMS TOWNSHIP — The Hillsdale County Sheriff’s Office is investigating a collision between a small pickup truck and a motorcycle that left one with serious injuries Monday afternoon.

The crash occurred on the curves at the intersection of State Road and Keith Road just after 12 p.m. Monday.

Witnesses to the crash said the woman rider of the motorcycle—who was traveling eastbound on State Road—took the curve wide.

A small passenger truck was traveling westbound and attempted to swerve to miss hitting the motorcycle which had crossed the center line.

However, the two collided on the pickup trucks front passenger side.

The motorcycle then exited the roadway, narrowly missing a wooden post, running over a realtor’s sign before wiping out in the front yard of a nearby residents.

The woman reportedly suffered facial lacerations and a possible leg injury and was wearing a helmet. She was transported to Hillsdale Hospital by Reading Emergency Unit.

The driver of the pickup truck was not injured.

This Tiny Electric Motorcycle Could Be the Perfect Commuter Bike

Woman charged with DUI after driving pickup truck into home |...