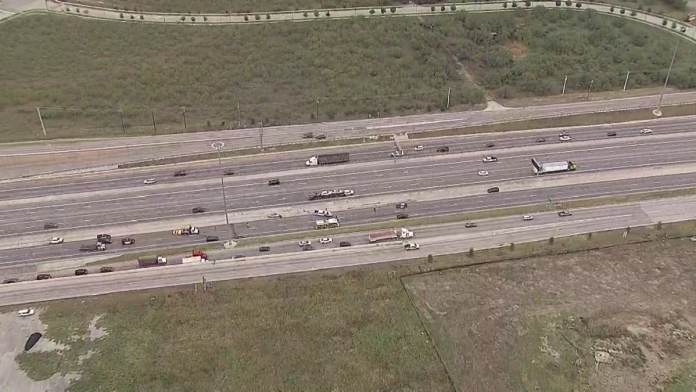 Loop 820 has reopened in Haltom City following a three-car crash that killed a woman and injured three men.

The crash was reported at about 7:40 a.m. along Northeast Loop 820 at Haltom Road. All eastbound lanes of the freeway were closed until about 12:45 p.m. with traffic diverted onto the service road and adjacent TEXPress lanes.

According to police, a Nissan Altima was parked with a flat tire on the side shoulder of the eastbound lanes when it was struck from behind by a Ford F-150.

The driver of the pickup truck told police he lost control after trying to reach for a water bottle. The truck veered to the left, rode up the inside barrier and struck the back of the Nissan. The impact launched the pickup into the air, over the Nissan and onto the back of a Ford Focus sedan parked in front of the Nissan, police said.

The driver of the F-150 was hospitalized with injuries that were not life-threatening, police said.

The deceased driver of the Ford Focus will be identified by the Tarrant County Medical Examiner’s Office once notification of family members has been made.

The investigation into the crash is ongoing and more details will be released as they become available, police said.