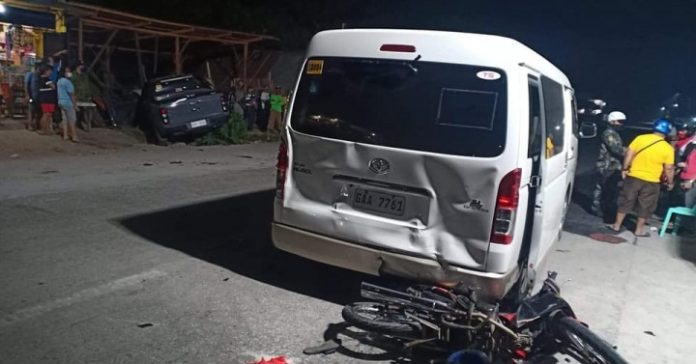 DUMAGUETE CITY — A female backrider of a motorcycle was killed while the driver was injured when a pick-up truck rammed into a line of vehicles at an enhanced community quarantine (ECQ) checkpoint in Barangay Talay here on Wednesday night.

A police report said the suspect identified as Sehwan Kim, 34, a Korean, was driving his pick-up truck going to the city after reportedly having a drinking spree with some friends in nearby Valencia town when he drove through the checkpoint at around 6:30 p.m.

Vehicles were lined up at the checkpoint waiting for the drivers’ turn to be thermal-scanned for their temperatures when the pick-up suddenly hit a motorcycle and a van.

As a result, the back-rider of the motorcycle, Ann Marie Jamito Maquiling, 40, a resident of Barangay Bagacay, sustained injuries and died while being brought to the Silliman University Medical Center.

Meanwhile, a white van driven by Marlon Obedencio was ferrying employees of Qualfon, a business process outsourcing company, was damaged after the pick-up also hit it.