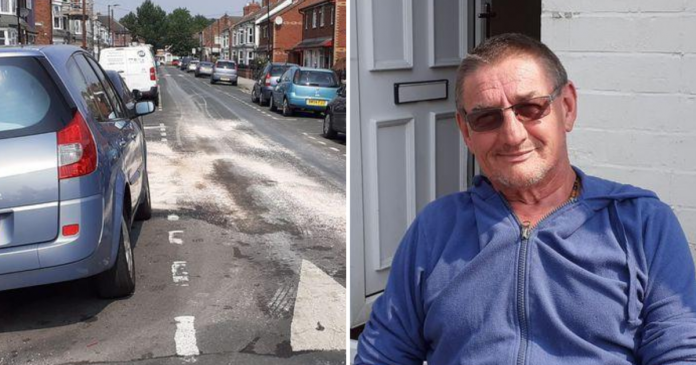 A resident has told how “half the street” chased two women when they both “legged it” after crashing a pickup truck into several cars before flipping it onto its roof.

Residents of De La Pole Avenue, which runs between Spring Bank West and Anlaby Road in west Hull, said the white Nissan Nivara “hurtled” down the “quiet” street at around 7.30pm on Tuesday, August 11.

One resident said it sounded as if the driver’s foot was stuck onto the accelerator in a low gear and said the car “screeched” down the street.

Two women were then reportedly seen trying to run from the scene before neighbours intervened.

David Waller, 66, said: “I was sat indoors, with the front door open. I heard a couple of little bangs, then the screeching, like someone was accelerating and the wheel spinning, it sounded like the foot was stuck of the accelerator, in low gear, it was going fast.

“I rushed out to the front door to help whoever was in there, but they had already got them out.

“It was two women. They looked fine, there was no blood or nothing, no scratches or owt.

“The passenger had sort of gone up the street with half the street chasing after her telling her not to leave. The driver had been stopped and taken into the house next door, they had her in the garden until police came.

“They had legged it, but everyone was after them.”

Mr Waller, who has lived down the street for 16 years said the driver is lucky no one was injured.

He added: “There’s quite a lot of families with kids. It was so lucky there was no one about to be fair.

“It’s absolutely crackers just to think that someone could have been unlucky and been outside.

Find the latest crimes near you

“It made enough noise coming down the street for people to be aware but from me hearing the first crack of a car to it ending up outside my house was seconds.

“It’s normally quiet, you get the occasional kid hurtling down, but it’s a good street to live on.”

Humberside Police have since arrested a 45-year-old woman for being in possession of Class A drugs, however, there is no update on any arrests for any driving offences.

A spokesperson for Humberside Police said: “A 45-year-old woman was arrested on suspicion of being in possession of Class A drugs following an incident in De La Pole Avenue, Hull.

“We were called at 7.25pm yesterday (Tuesday), following reports a white Nivara pick-up truck had clipped a number of parked cars before coming to rest on its roof.

“We are continuing to investigate the circumstances and the 45-year-old has been released pending further enquiries.

“If you have information about the incident but haven’t yet spoken to our officers, please call our non-emergency 101 line quoting incident number 16/84276/20.”

A New Ascent-Based Mid-Size Truck Is The Missing Piece In The...