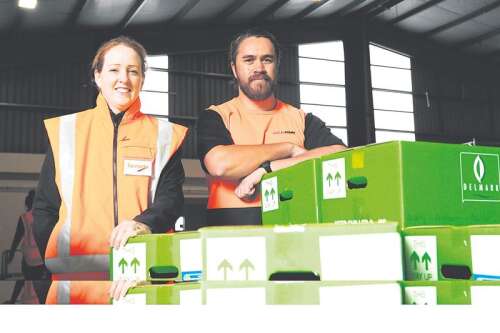 As Covid-19 wound its way across the globe essential and emergency workers braced for the worst, including Gisborne District Council’s Emergency Co-ordination Centre team. Diana Dobson talks to some of that team who is supporting the region’s response.

As the pandemic situation escalated, the Civil Defence Emergency Management (CDEM) Team stepped in, setting up the Emergency Co-ordination Centre (ECC) and calling in its people.

“When this all kicked off, it was a scary time for everyone,” says ECC group controller Dave Wilson.

“People came in to work at a time when everyone else was being told to stay home. They were leaving their families at a very uncertain time for everyone. Their focus on ensuring the community was cared for was unwavering and I am very proud of everyone involved.”

Each of the team has a bubble that includes the ECC family and each of their families, making it even more crucial to maintain social distancing and follow the rules strictly.

Dave is a dad of three who cut his teeth in Wellington as a senior Government advisor but he and wife Sara wanted to bring their children up on the beaches where they had chased waves as kids.

His calm but firm leadership style trickles through the team. He’s backed by his response manager, Wiremu Tamati, another Coastie who also came home for family reasons after an extended career in the military. Their ECC positions call for cool heads.

Dave is the one who is tasked with making the tough calls on important matters like checkpoints and welfare. It is about finding the balance between the national guidelines and directives and the requirements of our very unique communities in Tairāwhiti.

His hardest question came from home when his littlies asked him about the “monster under the bed” that they can’t see but was changing their worlds.

Wiremu’s military background is evident in the day-to-day running of the ECC and not just with timing and efficiency — everything has a name, whether it is an acronym, abbreviation or an “operation” name, most of which are completely in-house and all with a good slice of humour.

It creates a buoyed environment for all. When the ECC was stepped up, there were some long hours worked as systems were set up and protocols sought. Everyone was keen to do the best job they could by the community and when a “normal” working day ended, there was no rush for the door. Communities certainly discovered leaders, people rallied to ensure pakeke were kept safe, whānau had food on the table and essential services were kept strong.

Two of those are CDEM operations recovery Bronwyn O’Reilly and ECC intelligence manager Kupu Lloyd. Bronwyn is a former police officer while Kupu spent seven years in the Army as a combat engineer.

Bronwyn is a mum of two young boys and didn’t think twice about being part of the response.

“The first few weeks were stressful and tiring but I am an optimist and this really has put into perspective the things we really need,” she says.

The coming together of the team is a big bonus for her.

“The training we have done and put into action has certainly highlighted people with excellent skills. It was always going to be hard in those first few weeks but once we found our rhythm, it was great.”

Her background in policing stood her in good stead.

“As a police officer, you are always assessing and reassessing as things unfold. The Covid-19 pandemic meant constantly adapting to change.”

Kupu is a dad of four. In the Army he was deployed offshore and did humanitarian aid and disaster relief. His concerns in the early stages were around his parents and children.

At the ECC, his job is co-ordinating the intelligence team to ensure a wider picture of what is happening in the community.

“We are looking closely at the social environment and how Covid-19 is affecting the Gisborne region as a whole and what that could lead to,” he said.

The biggest challenges at the start were around establishing processes for a pandemic when most training had focused on natural disasters.

“I am really pleased we were able to pull together as such a strong team and operate so effectively for the community and region. Our team at the ECC has created a real whānau sort of base, which is key in these types of situations.”

There’s a buzz in the room not unlike a newsroom. Hushed conversations on cellphones and one-sided snippets of Zoom meetings. Radios chirp with feedback from the kai delivery teams on their Coast runs.

When kai parcels head out late in the day because the delivery truck has been delayed, there is no shortage of volunteers to drive to the top of the Coast to make sure people have food on their tables.

The team has scaled down a bit since Covid-19 Alert Level 4 but the passion and intensity of those ensuring the needs of the community are met has not diminished.

The 1pm Prime Minister’s briefing creates a physically-distanced gathering with everyone quiet as the daily numbers are announced. A sigh of relief moves swiftly through when it remains low. The pride in the efforts of Tairāwhiti to keep those numbers down is palpable.

“We couldn’t be more proud of the team that has come together from across Tairāwhiti with Police, health, Fire and Emergency NZ, the Ministry of Social Development, NZTA and our iwi partners to look after our community through this emergency,” says Dave.

The ECC holds regular training exercises with Council staff to ensure most are trained and can step in when there is an emergency. However, no-one predicted an international crisis like this one . . . tsunami, floods, earthquakes and other natural disasters were all well covered but a pandemic? That truly was unprecedented territory for all.

However, the ethos and processes inside the Tairāwhiti Civil Defence Management team in helping the wider community remain the same. The exercises done over the past year are solid and have assisted staff to slip easily into gear. The teams — operations, intelligence, welfare, logistics and public information — work together seamlessly and each has the other’s back.

While it is a formal operation, there is a familiar feeling in the room, thanks to those exercises.

The team will scale back further as the alert levels drop, but there is still plenty of work going on in the recovery phase of the district and lots of learnings for the next time the district is faced with a state of emergency.

Wiremu will be looking closely at everything that has been done and what could be done differently. For him, it’s well summed up by Ben Franklin’s words:

“By failing to prepare, you are preparing to fail.”

“Preparation is everything when it comes to Civil Defence and how a community copes in a disaster,” says Wiremu.

During the Covid-19 response, Council’s ECC has:

• Called 7145 over-65s to ensure they were safe, included and connected.

The ECC in full swing during the COVID-19 pandemic. Photo by Diana Dobson/The Black Balloon