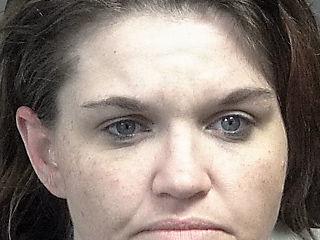 Two people were arrested on drug charges early Thursday after they were misidentified as potential suspects in a separate incident but gave police reason to be suspicious anyway, a report states.

Blount County Sheriff’s deputies were responding to a reported assault on Livia Lane in Maryville before 3 a.m. when a pickup truck approached the house next door and someone got out and walked into the house.

According to the incident report, as the truck turned around and drove away on Mutton Hollow Road, it was reported to possibly be occupied by the assailants of the alleged assault — two people later identified as Brittany Lynn Brewer of Vonore and William Kane Buchanan of Maryville.

Police left the scene of the original incident and caught up to the pickup truck to initiate a traffic stop.

By the time police made the stop, Brewer already had exited the passenger side of the pickup truck and tried to hide in a nearby yard after dropping a purse outside the vehicle.

One deputy approached Brewer while another ordered Buchanan to get out of the vehicle, detained him in handcuffs, conducted a brief pat-down and placed him in the rear seat of his patrol vehicle.

A second deputy approached Brewer, who identified herself and said she had run because there was a warrant for her arrest due to violation of probation — a fact deputies confirmed through their communications center. Brewer was taken into custody and placed in the back seat of the second police car.

While a deputy gathered Brewer’s belongings, he asked if she had any illicit items inside her purse, and she said there were drugs inside. A deputy located approximately 3 grams of suspected methamphetamine, a black digital scale and numerous clear baggies.

Brewer also told deputies that Buchanan had methamphetamine and heroin in his possession and that he had been selling it.

Buchanan consented to have his pickup truck searched, but the search did not yield any evidence. An officer then asked Buchanan to get out of the patrol vehicle and saw that he was wearing several pairs of pants.

Because the officer had not noticed the multiple pairs of pants during the initial pat-down he did a second pat-down to check for anything he may have missed.

While Buchanan was removing a pair of blue long johns, a concealed clear baggie fell out of his waistband and contained ½ a gram of an unknown substance that Buchanan said was heroin.

Buchanan and Brewer were taken to Blount County jail without incident and charged with drug possession with intent to sell. Their bonds were set at $15,000 apiece and they are due in Blount County General Sessions Court at 1:30 p.m. April 22.

According to the incident report, police determined that following investigation of the reported assault, Buchanan and Brewer were not involved.

Canada looks to trucking to help create a hydrogen economy –...