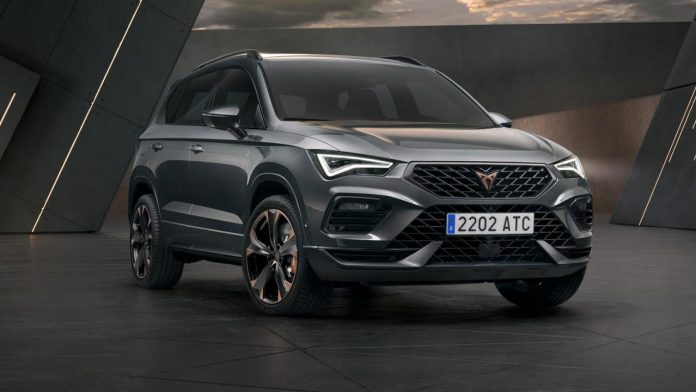 And lo, a week after Seat unveiled the facelifted Ateca crossover, it’s given us a fast one. The new Cupra Ateca – it’s not strictly a Seat, remember – uses the same 296bhp 2.0-litre turbocharged four-cylinder petrol engine as the old car. It drives all four wheels through a seven-speed DSG, whose quick shifts allow 0-62 mph in a respectable 4.9 seconds.

So what’s new? Not much, if we’re honest. No big mechanical changes, just a few tweaks to the steering calibration and throttle response to “give the vehicle maximum agility and enhance feedback”. Looks a bit different thanks to a new grille, bumpers and LED lights, while inside you get a cleverer infotainment system and a button-heavy steering wheel.

For more info on changes made to the Ateca generally, click on these blue words.

Over and above the standard Ateca the Cupra gets, among other things, DCC adaptive chassis control, a special ‘Cupra’ max-attack drive mode, a louder quad exhaust and optional 18-inch Brembo brakes. Oh, and lots of copper-coloured details, more supportive seats and various other schporty touches.

The pre-facelift car does a passable impression of a hoiked-up hot hatch, and we can’t see this new one being any different. We’ll let you know when we’ve had a go. In the meantime, why not go read about Cupra’s arguably more interesting new cars – the brand-new Cupra Leon and bespoke (in that there isn’t a pedestrian Seat version) Formentor crossover thing.

The best truck games on PC