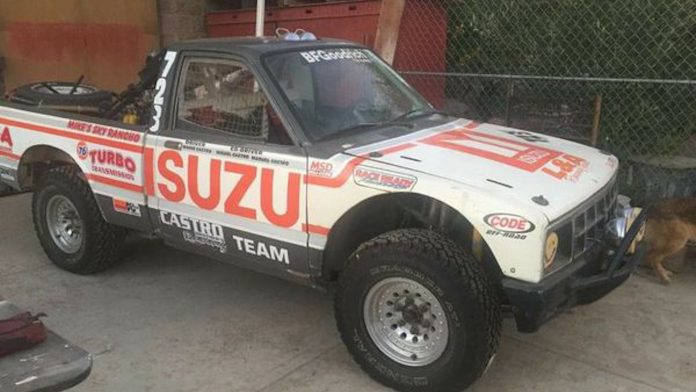 The standard P’Up was sold in the United States as both a Chevy LUV pickup and an Isuzu during the early 1980s. It came with either an 80-horsepower inline-four or a 58-horsepower diesel, neither of which is suitable for racing. If this truck has retained its racing running gear, then it’s powered by a hopped-up 2.3-liter engine, though output specs are uncertain. The seller says the list of race mods is too long to include in the ad, but does tell us that the truck’s got an aftermarket Rough Country suspension system, Western Wheels, and BFGoodrich tires, though the ad has photos of the truck with General Grabber all-terrains.

The Baja 1000 is one of the most grueling races in the world, attracting a true global field of competitors. The event runs 1,000 miles through the Mexican desert, formerly on a loop that began and ended in Ensenada. Vehicles and their drivers often suffer massive damage along the way, thanks to the course’s punishing mix of high speeds and rough terrain. Making things even harder are the locals, who sometimes booby trap the course to create jumps and obstacles for their entertainment.

It’s hard to think of an Isuzu as a collector’s item, but this one’s got the street cred to be desirable. At the very least, the buyer could add an interior and drive the thing as a super-rad daily, and at $10,500 the price isn’t terribly steep for a piece of Baja history.

Got a tip? Send us a note: tips@thedrive.com