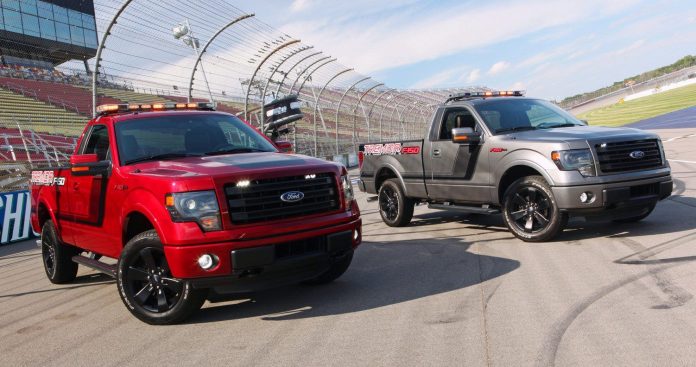 While most pickups are built as tough workhorses, some manufacturers fitted their trucks with sports car powertrains, making them ideal for the track.

While pickup trucks are great off-road and make amazing family cars, it’s not their only function. In fact, it appears pickup trucks are gaining fast on sports cars; and it seems the owners are thrilled. Trucks are made to be large workhorses with rugged features and powerful engines. But some trucks – like these, have enough speed to compete on the tracks.

Added with their versatility and durability, these trucks have considerable speed. By most measures, pickups are ill-suited for speedy travels. But beyond hauling heavy payloads efficiently, these trucks are pretty decent speed monsters. If you’ve got one of these, you can easily take it for a spin on the track without embarrassing yourself. And you probably should!

The Chevy C1500 454 SS certainly deserves a mention for pickup trucks that can hold their own on the tracks. When it debuted in 1990, it came standard with a 7.4-liter V8 producing 230 horsepower and 385 pound-feet of torque. But Chevrolet wasn’t content, so they tuned it to 255 horsepower and 405 pound-feet of torque in 1991, and that did it. The tuning allowed the 454 SS to move from 0-60 mph in 7.1 seconds. This truck can still hold its own today and is believed to have inspired the birth of Ford Ford Lightning in 1993.

The Silverado is the successor to the C/K model line, one of many trucks in Chevrolet’s lineup. First introduced in 1999, it has spawned many iterations and modifications with the fourth generation recently introduced for the 2019 model year. But the Silverado SS was introduced in 2003 and lasted through 2006. It was a high-performance pickup truck equipped with a standard 6.0 liter high-output V8 at 345 horsepower and 380 pound-feet of torque coupled with a four-speed automatic transmission. This all-wheel-drive pickup could sprint from 0-60 mph in 6.6 seconds. Not bad numbers for a truck.

The Chevy Colorado gets high marks for its powerful engine, and this 2017 model is no different. However, beyond its decent off-road capabilities, the 2017 Chevrolet Colorado score points for performance.

RELATED: These Pickup Trucks Are Built For Anything…Except Off-Roading

It comes with either a V6 gas or a four-cylinder turbodiesel engine and offers both RWD and AWD options. And the 8L45 eight-speed automatic transmission which makes the 2017 Colorado faster off the line only adds to the appeal. For this truck, sprinting from 0-60 miles per hour in 6.1 seconds is nothing, it does so with ease. A full second quicker than its 2015 model.

The Ford F-150 SVT Lightning first debuted in 1993 through ’95 before it was shelved. Then it resurfaced in 1999 through 2004. This very one is the 2001 Lightning model that pushes performance even further. It features a supercharged 5.4-liter Triton V-8 engine that pumps 380 horsepower with 450 pound-feet of torque. Along with performance upgrades like suspension fine-tuning from previous SVT Lightning, this 2001 model also has appealing looks with an interior that beats the predecessor. While previous models could do the 0-60 mph sprint in 7.1 seconds, the 2001 F-150 SVT would manage the same dash in 5.8 seconds

When the F-150 Tremor debuted in 2014, it was regarded as a successor to the Lightning. It features a 3.5-liter twin-turbo V-6 with 365 horsepower and 420 pound-feet of torque same as the F-150 EcoBoost. While some doubt the performance of this truck because it lacked powertrain enhancements, it’s in fact quicker than the Raptor. The Tremor is one of the fastest pickups to ever hit the streets and could do the 0-60 mph dash in 5.8 seconds.

The 2015 Ram R/T looks like a proper sports truck based on the mid-level trim and comes standard with 395 horsepower, 5.7-liter Hemi V-8. It’s a rear-wheel-drive with an eight-speed automatic transmission.

This beauty has an impressive 5.4 seconds dash to 60 miles per hour, while at rest. That’s right, Ram still has speed in its lineup in form of the 2015 Ram 1500 R/T Hemi. It would do quarter-mile in 14.1 at 99 mph. Not bad numbers for a production truck. While it has a more recent model, this monster is still a worthy buy.

The GMC Syclone is amongst the first-ever performance pickups and is considered a modern-day legend; and for good reason. At release, the Syclone was the quickest stock pickup truck in the world. It features a turbocharged 6-cylinder engine with 4.3-liter Supercharged and 280 horsepower with 350 pound-feet of torque.

And though looking at it is not enough to leave one impressed, this 1991 truck is faster than many sports cars from this era. The GMC Syclone could run 0-60 mph in 5.3 seconds and it finished the quarter-mile run under 14 seconds.

The Ford F-150 Raptor comes with a 3.5-liter EcoBoost V6, 450 horsepower engine. This truck would excel in a drag race against many modern trucks and sports cars. Ford advance their offering with the Raptor. The Ford F-150 Raptor would move from 0-60 mph in a stunning 5.1 seconds. This truck would dazzle on the tracks. As Ford said, “You don’t stay ahead of the pack by standing still.” It’s especially true in this age when fans don’t just want a truck, but a fast one as well; and the Raptor is in that territory.

The supercharged Tundra TRD has a hefty 5.7L V-8 Toyota engine with 504 horsepower and 550 pound-feet of torque. Funny thing though, this truck doesn’t come off the production line.

You’d first have to buy a Tundra, then have your dealership install Toyota’s Racing Development supercharger kit, for some extra bucks. But the installation is worth the extra costs; it takes the truck from just another pickup truck to a tire-melting menace. The Supercharged Tundra TRD can dash from 0-60 mph under 5 seconds.

The Ram SRT-10 was the undisputed king of quick trucks in 2004 and still holds its own today. With 500 horsepower, it was practically a sledgehammer on wheels. It came standard with a massive 8.3-liter Viper V-10 and 525 pound-feet of torque. This truck could dash from 0-60 miles per hour in 4.9 seconds. Absolutely stunning! Not to mention the looks.

The Dodge Ram SSRT-10 holds two world records for the world’s fastest production truck: one from the Guinness World Records and the other from Sports Car Club of America. It clocked an average top speed of 154.587 mph.

NEXT: These Awesome Trucks Are Modified To Perfection

Samuel Adelakun is a content writer, creative writer and car enthusiast. He’s written for some outlets including OperaNews, and currently a freelance writer for Valnet, Inc, contributing for HotCars. He also happens to be one of the finest writers around. Oh, and he’s Nigerian… but don’t hold that against him.