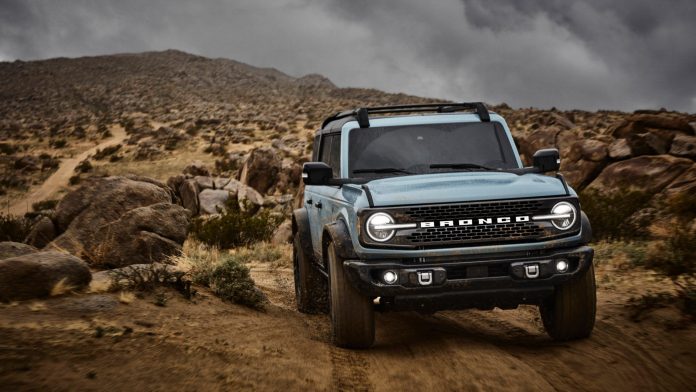 Now that the Ford Bronco SUV is officially part of a growing family of off-road-minded vehicles, it seems inevitable that a Bronco pickup is on the way. Trucks are one of Ford’s biggest cash cows, and if the Bronco is to truly upset Jeep, a model to compete with the popular Gladiator must surely be in the works. And according to some, it is, and it could see the light of day as soon as 2022.

Citing “sources close to the project,” Automobile Magazine alleges that Ford is trying to expedite the Bronco pickup to market, with the aforementioned 2022 launch window as its lofty goal. Said to be more likely, though, is a debut in mid-2024, for the 2025 model year, by which time the Bronco will reportedly be available with a larger 3.0-liter Ecoboost V6.

This engine, however, will reportedly not be available in the pickup model, which is said to share the smaller 2.7-liter Ecoboost and both associated transmission options—automatic and manual—with the current Bronco lineup. All current Bronco packages (such as the Sasquatch off-road setup) and trims are said to carry over to the truck model, which will reportedly be built exclusively as a four-door crew cab. Ford is also reportedly expected to commemorate the Bronco pickup’s arrival with a limited-run First Edition trim, whose contents will presumably mirror those of the sold-out launch model.

Pricing is also expected to resemble that of the SUV, starting at around $30,000 and topping out near $60,000. By the time the Bronco pickup does come out, Ford may have already launched its challenger to Jeep’s upcoming Wrangler plug-in hybrid (PHEV), which details hidden in the Bronco’s digital dashboard suggest could be some form of hybrid or fully electric model. Our speculation points to this model’s power roughly matching the V8-powered Wrangler 392, which one imagines will eventually lend its engine to an equivalent Gladiator.

Keep in mind that while specificity seems to lend these reports credence, they remain hearsay and speculation until Ford confirms the news itself—or photos of the 2025 (?) Bronco truck leak onto the internet. In the meantime, season the above with a grain—or a generous pinch—of salt.

Got a tip? Or proof of a Bronco pickup’s existence? Send us a note: tips@thedrive.com

Freight Miles Hold Up Better Than Other Transport During Pandemic