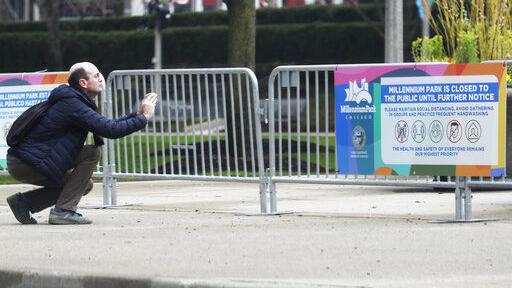 They climb into their cars in the middle of the night, racing to get on a line from which they may be turned away.

Feeling sick and stressed, people in the states hardest hit by the coronavirus have continued to stream into drive-thru testing sites, hoping to get guidance about whether to seek treatment, or reassurance that they aren’t infected.

So, they wait in darkness outside tented testing sites like the one at Bergen Community College, in Paramus, New Jersey, with achy bodies and uneasy minds, hoping shortly after sunrise they can finally be tested.

“This is obvious, but I just hope I didn’t infect anybody,” said Alexander Carpio, 17, as he waited for his turn.

Mobile testing sites like the one in northern New Jersey, across the border from the epicenter of the U.S. outbreak in New York, were hastily arranged in a scramble to catch up on testing that remains difficult to get, especially for those who weren’t showing severe symptoms or elderly. There are 24 in New Jersey handling about 8,000 tests per day.

As of Wednesday, about 96,000 people had tested positive in the state. Next door, in New York, more than a quarter million people have learned through testing that they are infected. The true number of ill people in both states is undoubtedly higher, as in many places tests remain scarce enough that people are being urged to only seek them if they are very ill.

In New Rochelle, the New York City suburb that was an early hot spot for the virus, a drive-thru testing site was established at Glen Island Park. That still left many people frustrated: Police turned away cars when they showed up without required appointments.

Even those who didn’t feel sick were jolted when they arrived at the popular location for picnics and special events on the Long Island Sound, and were greeted by National Guard troops and medical personnel outfitted head-to-toe in masks and other protective equipment.

“It was nerve-wracking because it was like a movie scene. I used to go to Glen Island all the time and now it’s a pandemic zone,” said Joe Goubeaud, who was advised to test along with his family after his wife, Kristina, a nurse in the New Rochelle school system, had symptoms.

An appointment wasn’t required in Paramus, but those seeking to be tested had to be showing symptoms. And with the ability to conduct only 500 tests per day, the site was reaching its capacity so quickly that it was closing not long after its 8 a.m. opening.

Officials in many states hit hard by the virus have said that the lack of widespread testing is the biggest challenge to lifting restrictions on social interaction that have kept people away from their jobs, and each other, for weeks.

A majority of the people who successfully get a test wind up testing negative, state statistics show.

For most people, the coronavirus causes mild or moderate symptoms that clear up after a few weeks. For some, it can cause more severe illness, including pneumonia, and death.

Alexander is a senior in high school, aware he may miss out on prom night, a graduation ceremony and so much more that was supposed to make this springtime so fun. He’s been accepted to college but doesn’t know where that stands, because he isn’t sure if or when he can take the placement exams that are supposed to determine his classes.

But he has much bigger concerns.

He shares a room in his family’s home with his 72-year-old grandmother, who is diabetic. With pain in his lungs that was so severe that he switched from sleeping on his stomach to his back, he was certain he would be like his mother, who had already tested positive.