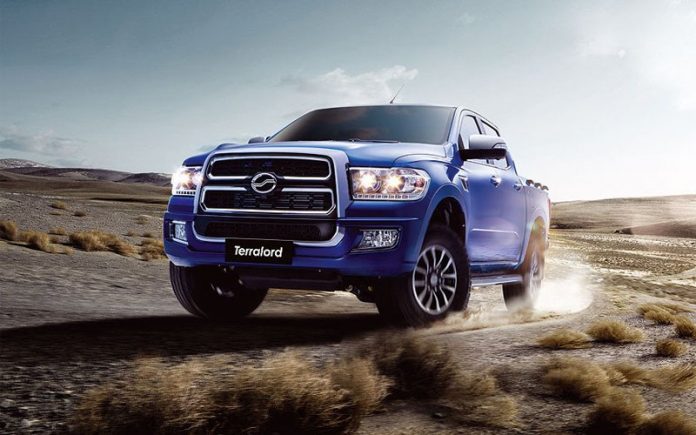 This is how Chinese vehicle manufacturers look at naming their new products for the global market.

Coming from the Hebei Zhongxing Automobile company, this new pickup truck uses a tried and tested Isuzu I4 Turbo Diesel engine to ensure reliability in Asean nations and little after-sales and parts issues for buyers.

Also, it probably has one of the coolest sounding pickup names in the business as Terralord equates to “Lord of the Earth”.

Competing directly for the segment led by the Ranger, Hilux and Triton, there is available room for this truck to make its mark in Malaysia.

Founded in 1999, this Chinese auto manufacturers historical line-up bears striking resemblance to pickup trucks originating from Japan or the US.

Unusually for a Chinese automaker, Zhongxing has managed to achieve moderate success with exports of their vehicles for a number of years now, something that other Chinese automakers have only recently been able to do.

Complete knock down (CKD) kits of Zhongxing pickup trucks have been assembled in the Middle East and Africa, and even Poland for a time.

Malaysia was also considered to be an assembly hub for these Zhongxing kits but nothing has come to fruition as of today.

That being said, maybe things might change with this new revamped mid-sized Terralord pickup truck.

In terms of design, the Terralord name certainly fits the bold, brash, chromed-out front grille. It almost looks like a smaller version of a Dodge Ram from some angles.

The rest of the truck continues that American aesthetic by looking almost like a copy of the current Ford Ranger. On the side, aside from the chrome wing mirrors and chrome rock sliders, that fender vent is unmistakably Ranger.

Same goes for the bed at the back, which is not helped by the oval Zhongxing emblem having the same outline as that of the Blue Oval.

As for the powertrain, Zhongxing has ditched American influence in favour of a Japanese engine in the form of an Isuzu-sourced 2.5-litre turbo diesel that outputs 136 hp and 320 Nm of torque.

Unlike other automakers who normally hide the fact that they borrow bits from other car makers, Zhongxing has done the opposite and are proudly advertising that the Terralord comes with the same engine as in the previous generation D-Max.

Mated to a six-speed Punch Powerglide automatic transmission, and driving all four wheels thanks to selectable all-wheel drive, this Chinese pickup touts itself to be a dab hand when the going gets rough.

Riding on 431.8 mm rubber, the Terralord claims to have the best-in-class off-road capabilities and unrivalled toughness thanks to a strengthened chassis that is allegedly stronger than all its rivals.

Like any other modern pickup truck though, the Terralord has a decent car-like interior.

The Terralord is also not short on safety, featuring the usual alphabet soup of safety acronyms which include ABS with EBD, Electronic Stability Control, Traction Control, Hill Start Assist and Emergency Brake Assist.

A tire pressure monitoring system and an electronic parking brake also makes its way into this mid-size truck, not to mention the four airbags.

As mentioned before, Zhongxing does have the experience with CKD kits for trucks in addition to prior plans to build an assembly plant here locally, so it won’t be entirely surprising if the Terralord does make it to our shores one day.