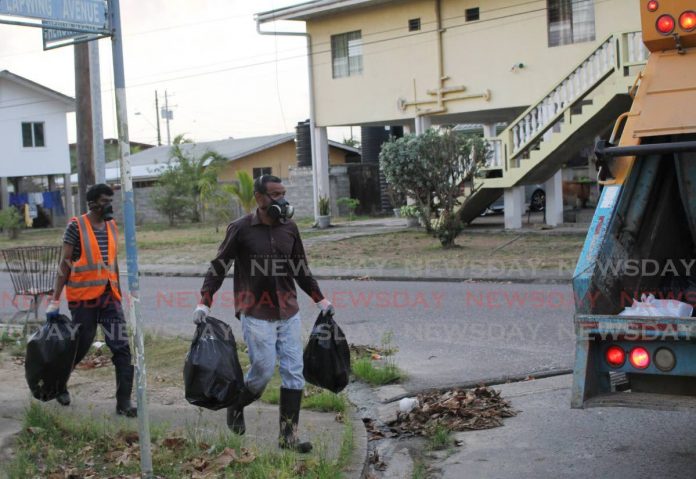 We often take for granted the work done by garbage collectors, dismissing it as menial. These men arrive long before sunrise, when many are still sleeping, to carry out a job that is crucial to keeping communities clean and tidy.

To get a better appreciation of the service these people provide, Newsday photojournalist ANGELO MARCELLE donned his safety gear, said his prayers and hopped aboard the back of a garbage truck. This is his report.

DARKNESS and the sound of dogs barking. It’s 5 am at the Arima Borough Corporation’s stockpile site off the O’Meara Road. There is a palpable chill in the air. Suddenly, the sound of truck engines fills the air as garbage trucks and their crews get ready to head out on their respective routes.

Sanitation foreman Marvin Boodoo assigns me to a truck with garbage compactor operator and driver James De Leon and loaders Leslie Hall and Adrian Seepersad. Seepersad clings on to the back of the truck, while Hall and myself sit in the truck’s cabin as we venture out in search of rubbish.

Two minutes later and the work begins at the entrance to Malabar Phase 3. For the next two hours, I get a taste of what it is to be a garbage collector. The housing development is south of the Larry Gomes Stadium and usually at this time, there are many people out exercising. But we are in the era of covid19 and the streets are quiet and empty.

We were probably on our ninth house when an elderly man emerged to show his appreciation with beastly cold bottled drinks. A female health care worker stood at the corner, awaiting transportation.

Seepersad and Hall have a system which seemed to speed up the process. Hall walked briskly ahead of the truck, removing garbage bags from bins, off walls or strung on fences and placing them in a pile on the side of the road.

Seepersad follows to collect and fling the bags into the back of the truck while Hall continues ahead, from house to house. Their precision speaks to years of practice.

You must be fit for this job. By the 6th street, my clothing is soaked through with perspiration. The constant running, lifting and jumping on and off the back of the truck is a serious workout, yet the pace is manageable.

Seepersad sees me wiping away sweat and teases, “If you wasn’t here we would be going much faster.”
As we moved from street to street, the roar of the truck alerted some homeowners.

A woman runs out of her house, in her nightie, and with a cheery “Good morning,” hands me her trash before turning and running back indoors, most likely to wash her hands and snuggle back in bed.

Another man signals from a distance by waving his bag, before resting it on the ground. We notice garbage scattered at the front of several bins, the work of stray dogs or bags improperly tied and perhaps thrown from some distance towards the bins. We move in with our “scrapers,” long slightly curved pieces of metal used to gather loose refuse on the ground into a pile and also to scoop them into the compactor.

Hall, who has been on the job for three years, said some people appreciated his service while others don’t seem to care, from the way they fling their garbage into the road outside their homes.

Although at times, I cringed as the smell of rotting garbage assaulted my nose, Seepersad and Hall did their work with ease.

Seepersad said he has never got sick because of his work.
“It’s like my body get accustomed to it.”

After about two hours, I’ve had enough and quit. I abandon the work and waved at the men who waved back before continuing their work. I have a new appreciation for the yeoman service these garbage collectors do, week in and week out. They are truly essential workers

How police in this small West Virginia town received a $1m...